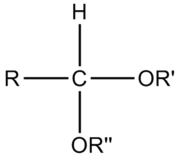 An acetal is a molecule
Molecule
A molecule is an electrically neutral group of at least two atoms held together by covalent chemical bonds. Molecules are distinguished from ions by their electrical charge...
with two single-bonded oxygen atoms attached to the same carbon atom.

Traditional usages distinguish ketals from acetals (whereas a ketal has two carbon-bonded R groups and is formally derived from a ketone
Ketone
In organic chemistry, a ketone is an organic compound with the structure RCR', where R and R' can be a variety of atoms and groups of atoms. It features a carbonyl group bonded to two other carbon atoms. Many ketones are known and many are of great importance in industry and in biology...
, an acetal has one or both carbon-bonded R groups as a hydrogen and is formally derived from an aldehyde
Aldehyde
An aldehyde is an organic compound containing a formyl group. This functional group, with the structure R-CHO, consists of a carbonyl center bonded to hydrogen and an R group....
). Current IUPAC terminology classifies ketals as a subset of acetals.

Formation of an acetal occurs when the hydroxyl
Hydroxyl
A hydroxyl is a chemical group containing an oxygen atom covalently bonded with a hydrogen atom. In inorganic chemistry, the hydroxyl group is known as the hydroxide ion, and scientists and reference works generally use these different terms though they refer to the same chemical structure in...
group of a hemiacetal
Hemiacetal
Hemiacetals and hemiketals are compounds that are derived from aldehydes and ketones respectively. The Greek word hèmi means half...
becomes protonated and is lost as water. The carbocation
Carbocation
A carbocation is an ion with a positively-charged carbon atom. The charged carbon atom in a carbocation is a "sextet", i.e. it has only six electrons in its outer valence shell instead of the eight valence electrons that ensures maximum stability . Therefore carbocations are often reactive,...
ion that is produced is then rapidly attacked by a molecule of alcohol
Alcohol
In chemistry, an alcohol is an organic compound in which the hydroxy functional group is bound to a carbon atom. In particular, this carbon center should be saturated, having single bonds to three other atoms....
. Loss of the proton from the attached alcohol gives the acetal.

Most glycosidic bond
Glycosidic bond
In chemistry, a glycosidic bond is a type of covalent bond that joins a carbohydrate molecule to another group, which may or may not be another carbohydrate....
s in carbohydrate
Carbohydrate
A carbohydrate is an organic compound with the empirical formula ; that is, consists only of carbon, hydrogen, and oxygen, with a hydrogen:oxygen atom ratio of 2:1 . However, there are exceptions to this. One common example would be deoxyribose, a component of DNA, which has the empirical...
s and other polysaccharide
Polysaccharide
Polysaccharides are long carbohydrate molecules, of repeated monomer units joined together by glycosidic bonds. They range in structure from linear to highly branched. Polysaccharides are often quite heterogeneous, containing slight modifications of the repeating unit. Depending on the structure,...
s are acetal linkages. Acetaldehyde diethyl acetal is an important flavouring compound in distilled beverage
Distilled beverage
A distilled beverage, liquor, or spirit is an alcoholic beverage containing ethanol that is produced by distilling ethanol produced by means of fermenting grain, fruit, or vegetables...
s.

Acetals are used as protecting group
Protecting group
A protecting group or protective group is introduced into a molecule by chemical modification of a functional group in order to obtain chemoselectivity in a subsequent chemical reaction...
s for carbonyl
Carbonyl
In organic chemistry, a carbonyl group is a functional group composed of a carbon atom double-bonded to an oxygen atom: C=O. It is common to several classes of organic compounds, as part of many larger functional groups....
groups in organic synthesis as they are stable with respect to hydrolysis by bases and with respect to many oxidizing and reducing agents.