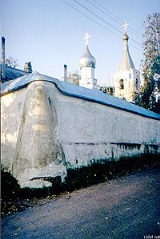 Encyclopedia
Orsha is a city in Belarus
Belarus
Belarus , officially the Republic of Belarus, is a landlocked country in Eastern Europe, bordered clockwise by Russia to the northeast, Ukraine to the south, Poland to the west, and Lithuania and Latvia to the northwest. Its capital is Minsk; other major cities include Brest, Grodno , Gomel ,...
in Vitebsk voblast on the fork of the Dnieper
Dnieper River
The Dnieper River is one of the major rivers of Europe that flows from Russia, through Belarus and Ukraine, to the Black Sea.The total length is and has a drainage basin of .The river is noted for its dams and hydroelectric stations...
and Arshytsa rivers. 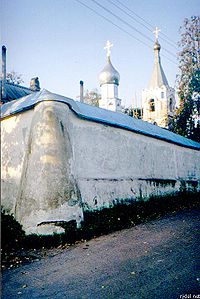 Orsha was first mentioned in 1067 as Rsha , making it one of the oldest towns in Belarus. The town was named after the river, which was originally also named Rsha, probably from a Baltic
Baltic languages
The Baltic languages are a group of related languages belonging to the Balto-Slavic branch of the Indo-European language family and spoken mainly in areas extending east and southeast of the Baltic Sea in Northern Europe...
root *rus 'slowly flowing.'

In 1555, Mikołaj "Czarny" Radziwiłł founded a Calvinist (Protestant) order in Orsha, one of the first in the Belarusian lands. From the sixteenth to eighteenth centuries Orsha was a notable religious centre, with dozens of Orthodox, Protestant and Catholic churches and orders. The town was also home to a large Jewish population. 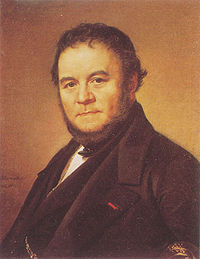 In 1812, the city was badly burned during Napoleon's invasion. At the time of Orsha had been taken under control of French troops, there was a French writer Marie-Henri Beyle (also known under the pen name
Pen name
A pen name, nom de plume, or literary double, is a pseudonym adopted by an author. A pen name may be used to make the author's name more distinctive, to disguise his or her gender, to distance an author from some or all of his or her works, to protect the author from retribution for his or her...
Stendhal
Stendhal
Marie-Henri Beyle , better known by his pen name Stendhal, was a 19th-century French writer. Known for his acute analysis of his characters' psychology, he is considered one of the earliest and foremost practitioners of realism in his two novels Le Rouge et le Noir and La Chartreuse de Parme...
) in a rank of intendant
Intendant
The title of intendant has been used in several countries through history. Traditionally, it refers to the holder of a public administrative office...
.

The population before World War II
World War II
World War II, or the Second World War , was a global conflict lasting from 1939 to 1945, involving most of the world's nations—including all of the great powers—eventually forming two opposing military alliances: the Allies and the Axis...
was about 37,000. The city was occupied by Germany on July 16, 1941. The occupiers founded several concentration camps in the city, where an estimated 19,000 people were killed.

There is a widespread Soviet myth of Katyusha [Katyusha rocket launcher|Katyusha]] multiple rocket launcher's maiden attack of July 14, 1941 at Orsha, destroying a station with several supply trains. This legend obviously conflicts the fact that Orsha remained at the hands of the Soviet Army on July 14 and through July 15, 1941. And even on July 16, 1941 the German troops were unlikely to invade Orsha aboard their supply trains. Thus, had the Katyusha’s rockets fallen on any supply trains on July 16, 1941 those would have been the Soviet trains unable to have left Orsha railroad station. See Russian Wikipedia's article "Гвардейские реактивные минометы" ("Guards Mortars"). The multiple rocket launchers were top secret in the beginning of World War II and any records of their actions in July 1941 were forbidden, which fact led to numerous rumors and myths. The Soviets encouraged and co-ordinated undercover anti-fascist resistance groups, and one of the most famous was a partisan brigade under the command of Kanstantsin Zaslonau (Konstantin Zaslonov), operating from the Orsha train depot. His group planted ninety-three bombs on German trains in just three months. After March 1942, he went in hiding in the forests, where he and his group continued guerilla warfare. He was killed in action on November 14, 1942. Soviet troops liberated Orsha on June 27, 1944.

The bandy
Bandy
Bandy is a team winter sport played on ice, in which skaters use sticks to direct a ball into the opposing team's goal.The rules of the game have many similarities to those of association football: the game is played on a rectangle of ice the same size as a football field. Each team has 11 players,...
club Start
Start (Orsha bandy club)
Start are a Bandy club from Orsha, Belarus who are among the best in the country with several of their players having represented the Belarusian national bandy team....
has produced players for the Belarus national bandy team.

Orsha became an important transportation center after the construction of a Dnieper River port. The coming of railway lines in the second half of the nineteenth century greatly contributed to the city growth:


Today, Orsha is a major railway node where the Minsk–Moscow crosses the northern Viciebsk line, which branches south to Mogilev
Mogilev
Mogilev is a city in eastern Belarus, about 76 km from the border with Russia's Smolensk Oblast and 105 km from the border with Russia's Bryansk Oblast. It has more than 367,788 inhabitants...
and Kryčaŭ. All trains from Moscow and Saint-Petersburg bound for Western Europe
Western Europe
Western Europe is a loose term for the collection of countries in the western most region of the European continents, though this definition is context-dependent and carries cultural and political connotations. One definition describes Western Europe as a geographic entity—the region lying in the...
pass through Orsha.

The city is also a junction of the important motorways: The M1 (E30) Moscow-Brest and the M8/M20 (E95) Saint Petersburg - Odessa.

Recently, a high rate of oncological
Oncology
Oncology is a branch of medicine that deals with cancer...
diseases attracted attention to this city. Before 1987 there were less than 100 new cancer patients registered each year. Since then the number grew fivefold, with more than 500 new patients registered per year as of 2004. The biggest growth was registered in 2003–04 (178%). This was widely reported in independent media, but Belarusian officials are silent about the alarming health situation and possible reasons for this high cancer rate. Two possible factors mentioned in the independent media are old Soviet military installations in Orsha, and the Chernobyl disaster
Chernobyl disaster
The Chernobyl disaster was a nuclear accident that occurred on 26 April 1986 at the Chernobyl Nuclear Power Plant in Ukraine , which was under the direct jurisdiction of the central authorities in Moscow...
.