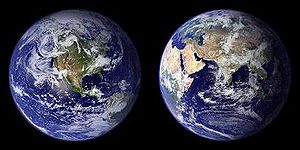 The question of the origin of water on Earth, or the question of why there is clearly more water
Water
Water is a chemical substance with the chemical formula H2O. A water molecule contains one oxygen and two hydrogen atoms connected by covalent bonds. Water is a liquid at ambient conditions, but it often co-exists on Earth with its solid state, ice, and gaseous state . Water also exists in a...
on the Earth than on the other planets of the Solar System
Solar System
The Solar System consists of the Sun and the astronomical objects gravitationally bound in orbit around it, all of which formed from the collapse of a giant molecular cloud approximately 4.6 billion years ago. The vast majority of the system's mass is in the Sun...
, has not been clarified. There are several acknowledged theories as to how the world's ocean
Ocean
An ocean is a major body of saline water, and a principal component of the hydrosphere. Approximately 71% of the Earth's surface is covered by ocean, a continuous body of water that is customarily divided into several principal oceans and smaller seas.More than half of this area is over 3,000...
s were formed over the past 4.6 billion years
History of Earth
The history of the Earth describes the most important events and fundamental stages in the development of the planet Earth from its formation 4.578 billion years ago to the present day. Nearly all branches of natural science have contributed to the understanding of the main events of the Earth's...
.


Water in the development of the Earth

A sizeable quantity of water would have been in the material which formed the Earth. Water molecules would have escaped Earth's gravity more easily when it was less mass
Mass
Mass can be defined as a quantitive measure of the resistance an object has to change in its velocity.In physics, mass commonly refers to any of the following three properties of matter, which have been shown experimentally to be equivalent:...
ive during its formation. Hydrogen and helium are expected to continually leak from the atmosphere, but the lack of denser noble gas
Noble gas
The noble gases are a group of chemical elements with very similar properties: under standard conditions, they are all odorless, colorless, monatomic gases, with very low chemical reactivity...
es in the modern atmosphere suggests that something disastrous happened to the early atmosphere.

Part of the young planet is theorized to have been disrupted by the impact which created the Moon
Giant impact hypothesis
The giant impact hypothesis states that the Moon was created out of the debris left over from a collision between the young Earth and a Mars-sized body. The colliding body is sometimes called Theia for the mythical Greek Titan who was the mother of Selene, the goddess of the moon.The giant impact...
, which should have caused melting of one or two large areas. Present composition does not match complete melting and it is hard to completely melt and mix huge rock masses. However, a fair fraction of material should have been vaporized by this impact, creating a rock-vapor atmosphere around the young planet. The rock-vapor would have condensed within two thousand years, leaving behind hot volatiles which probably resulted in a heavy carbon dioxide
Carbon dioxide
Carbon dioxide is a naturally occurring chemical compound composed of two oxygen atoms covalently bonded to a single carbon atom...
atmosphere with hydrogen and water vapor
Water vapor
Water vapor or water vapour , also aqueous vapor, is the gas phase of water. It is one state of water within the hydrosphere. Water vapor can be produced from the evaporation or boiling of liquid water or from the sublimation of ice. Under typical atmospheric conditions, water vapor is continuously...
. Liquid water oceans existed despite the surface temperature of 230°C because of the atmospheric pressure of the heavy CO2 atmosphere. As cooling continued, subduction
Subduction
In geology, subduction is the process that takes place at convergent boundaries by which one tectonic plate moves under another tectonic plate, sinking into the Earth's mantle, as the plates converge. These 3D regions of mantle downwellings are known as "Subduction Zones"...
and dissolving in ocean water removed most CO2 from the atmosphere but levels oscillated wildly as new surface and mantle
Mantle (geology)
The mantle is a part of a terrestrial planet or other rocky body large enough to have differentiation by density. The interior of the Earth, similar to the other terrestrial planets, is chemically divided into layers. The mantle is a highly viscous layer between the crust and the outer core....
cycles appeared.

Study of zircon
Zircon
Zircon is a mineral belonging to the group of nesosilicates. Its chemical name is zirconium silicate and its corresponding chemical formula is ZrSiO4. A common empirical formula showing some of the range of substitution in zircon is 1–x4x–y...
s has found that liquid water must have existed as long ago as 4.4 Ga, very soon after the formation of the Earth. This requires the presence of an atmosphere. The Cool Early Earth
Cool Early Earth
The Cool Early Earth theory posits that the early planet Earth had a calm influx of bolides and a cool climate allowing fluid water, after the planetary accretion but before the occurrence of the Late Heavy Bombardment in the Hadean geological eon. The Cool Early Earth is believed to have been the...
theory covers a range from about 4.4 Ga to 4.0 Ga.

In fact, recent studies of zircons (in the fall of 2008) found in Australian Hadean rock hold minerals that point to the existence of plate tectonics
Plate tectonics
Plate tectonics is a scientific theory that describes the large scale motions of Earth's lithosphere...
as early as 4 billion years ago. If this holds true, the previous beliefs about the Hadean period
Hadean
The Hadean is the geologic eon before the Archean. It started with the formation of the Earth about 4.7 Ga and ended roughly 3.8 Ga, though the latter date varies according to different sources. The name "Hadean" derives from Hades, Greek for "Underworld", referring to the "hellish"...
are far from correct. That is, rather than a hot, molten surface and atmosphere full of carbon dioxide, the Earth's surface would be very much like it is today. The action of plate tectonics traps vast amounts of carbon dioxide, thereby eliminating the greenhouse effects and leading to a much cooler surface temperature and the formation of solid rock, and possibly even life.

That the Earth's water originated purely from comets is implausible, as a result of measurements of the isotope ratios of hydrogen in the three comets Halley, Hyakutake and Hale-Bopp by researchers like David Jewitt, as according to this research the ratio of deuterium
Deuterium
Deuterium, also called heavy hydrogen, is one of two stable isotopes of hydrogen. It has a natural abundance in Earth's oceans of about one atom in of hydrogen . Deuterium accounts for approximately 0.0156% of all naturally occurring hydrogen in Earth's oceans, while the most common isotope ...
to protium (D/H ratio) of the comets is approximately double that of oceanic water. What is however unclear is whether these comets are representative of those from the Kuiper Belt
Kuiper belt
The Kuiper belt , sometimes called the Edgeworth–Kuiper belt, is a region of the Solar System beyond the planets extending from the orbit of Neptune to approximately 50 AU from the Sun. It is similar to the asteroid belt, although it is far larger—20 times as wide and 20 to 200 times as massive...
. According to A. Morbidelli the largest part of today's water comes from protoplanets formed in the outer asteroid belt that plunged towards the Earth, as indicated by the D/H proportions in carbon-rich chondrites. The water in carbon-rich chondrites point to a similar D/H ratio as oceanic water. Nevertheless, mechanisms have been proposed to suggest that the D/H-ratio of oceanic water may have increased significantly throughout Earth's history. Such a proposal is consistent with the possibility that a significant amount of the water on Earth was already present during the planet's early evolution.

In the early 1930s Cornelis Van Niel discovered that sulfide-dependent chemoautotrophic bacteria (purple sulfur bacteria
Purple sulfur bacteria
The purple sulfur bacteria are a group of Proteobacteria capable of photosynthesis, collectively referred to as purple bacteria. They are anaerobic or microaerophilic, and are often found in hot springs or stagnant water. Unlike plants, algae, and cyanobacteria, they do not use water as their...
) fix carbon and synthesize water as a byproduct of a photosynthetic pathway using hydrogen sulfide
Hydrogen sulfide
Hydrogen sulfide is the chemical compound with the formula . It is a colorless, very poisonous, flammable gas with the characteristic foul odor of expired eggs perceptible at concentrations as low as 0.00047 parts per million...
and carbon dioxide :

Few organisms utilize this method of photosynthesis today, making the water contribution negligible. But on the hydrogen sulfide
Hydrogen sulfide
Hydrogen sulfide is the chemical compound with the formula . It is a colorless, very poisonous, flammable gas with the characteristic foul odor of expired eggs perceptible at concentrations as low as 0.00047 parts per million...
-rich and oxygen-poor early planet, a small but significant portion of the earth's water may have been synthesized biochemically through this pathway.