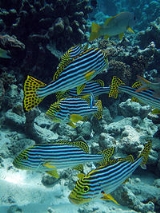 Encyclopedia
Oriental sweetlips, Plectorhinchus
Plectorhinchus
The sweetlips, Plectorhinchus, are a genus in the family Haemulidae, with 35 species found in fresh, brackish and salt waters. These fish have big fleshy lips and tend to live on coral reefs in the Indo-Pacific in small groups or pairs...
vittatus, a species
Species
In biology, a species is one of the basic units of biological classification and a taxonomic rank. A species is often defined as a group of organisms capable of interbreeding and producing fertile offspring. While in many cases this definition is adequate, more precise or differing measures are...
of sweetlips of the family
Family (biology)
In biological classification, family is* a taxonomic rank. Other well-known ranks are life, domain, kingdom, phylum, class, order, genus, and species, with family fitting between order and genus. As for the other well-known ranks, there is the option of an immediately lower rank, indicated by the...
Haemulidae
Haemulidae
The grunts are a family, Haemulidae, of fishes in the order Perciformes. They are numerous and widespread, with about 150 species in 19 genera, found in tropical fresh, brackish and salt waters around the world...
, is found in Indo-West Pacific oceans. This common name can also refer to the species Plectorhinchus orientalis
Plectorhinchus orientalis
Plectorhinchus orientalis is a Grunt from the Indo-Pacific. It occasionally makes its way into the aquarium trade. It grows to a size of 86cm in length....

The Oriental Sweetlips reach lengths up to 85 centimetres (33.5 in). Juveniles are striped black. As they age, the stripes in the tail are replaced by black dots on a yellow background. They inhabit coral reef
Coral reef
Coral reefs are underwater structures made from calcium carbonate secreted by corals. Coral reefs are colonies of tiny living animals found in marine waters that contain few nutrients. Most coral reefs are built from stony corals, which in turn consist of polyps that cluster in groups. The polyps...
s and feed on crustacean
Crustacean
Crustaceans form a very large group of arthropods, usually treated as a subphylum, which includes such familiar animals as crabs, lobsters, crayfish, shrimp, krill and barnacles. The 50,000 described species range in size from Stygotantulus stocki at , to the Japanese spider crab with a leg span...
s, snail
Sea snail
Sea snail is a common name for those snails that normally live in saltwater, marine gastropod molluscs....
s, slug
Sea slug
Sea slug is a common name used for several different groups of saltwater snails that either lack a shell or have only an internal shell, in other words this name is used for various lineages of marine gastropod mollusks that are either not conchiferous or appear not to be.The phrase "sea slug" is...
s, and worm
Sea worm
Sea worm is a general term that may refer to a number of phyla of animals, or may refer specifically to:*Acanthocephala, parasitic worm*Annelida, segmented worms*Chaetognatha, arrow worms*Cycliophora, lobster worms*Entoprocta*Echiura, spoon worms...
s.
The source of this article is wikipedia, the free encyclopedia.  The text of this article is licensed under the GFDL.