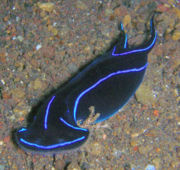 Sea slug is a common name
Common name
A common name of a taxon or organism is a name in general use within a community; it is often contrasted with the scientific name for the same organism...
used for several different groups of saltwater snail
Snail
Snail is a common name applied to most of the members of the molluscan class Gastropoda that have coiled shells in the adult stage. When the word is used in its most general sense, it includes sea snails, land snails and freshwater snails. The word snail without any qualifier is however more often...
s that either lack a shell
Gastropod shell
The gastropod shell is a shell which is part of the body of a gastropod or snail, one kind of mollusc. The gastropod shell is an external skeleton or exoskeleton, which serves not only for muscle attachment, but also for protection from predators and from mechanical damage...
or have only an internal shell, in other words this name is used for various lineages of marine
Marine (ocean)
Marine is an umbrella term. As an adjective it is usually applicable to things relating to the sea or ocean, such as marine biology, marine ecology and marine geology...
gastropod mollusks that are either not conchiferous (shell-bearing) or appear not to be.

The phrase "sea slug" is often applied to nudibranch
Nudibranch
A nudibranch is a member of what is now a taxonomic clade, and what was previously a suborder, of soft-bodied, marine gastropod mollusks which shed their shell after their larval stage. They are noted for their often extraordinary colors and striking forms...
s, members of the order Nudibranchia within the opisthobranch gastropods. Many nudibranchs are colorful and are a noticeable part of the underwater fauna. However the phrase "sea slug" is also applied to various other groups within the Opisthobranchia
Opisthobranchia
Opisthobranchs are a large and diverse group of specialized complex marine gastropods previously united under Opisthobranchia within the Heterobranchia, but no longer considered to represent a monophyletic grouping...
including the sea hares
Sea hare
The clade Aplysiomorpha, commonly known as Sea hares or Sea Bags , are medium-sized to very large Opisthobranchia with a soft internal shell made of protein...
, the sacoglossa
Sacoglossa
Sacoglossa, commonly known as the sacoglossans or the "sap-sucking sea slugs", are a clade of small sea slugs and sea snails, marine gastropod mollusks that belong to the clade Heterobranchia...
ns, various families of bubble snails (Cephalaspidea
Cephalaspidea
The suborder Cephalaspidea, also known as the headshield slugs and bubble snails, is a clade of sea slugs and bubble snails, marine gastropod mollusks within the larger clade Euopisthobranchia....
) and others, some of which have reduced shells, and many of which are shell-less.

Other groups of shell-less or reduced-shell marine gastropods which are sometimes called sea slugs include the sorbeoconch family Pterotracheoidea
Pterotracheoidea
The Pterotracheoidea is, according to the Taxonomy of the Gastropoda , a taxonomic superfamily of sea snails or sea slugs, marine gastropod molluscs in the clade Littorinimorpha. They are commonly called heteropods or sea elephants.- Taxonomy :This superfamily comprises four families The...
and the pulmonate (air-breathing) sea slug family Onchidiidae
Onchidiidae
Onchidiidae are a family of small, air-breathing sea slugs. They are shell-less marine pulmonate gastropod molluscs. Onchidiidae is the only family within the superfamily Onchidioidea....
.
The source of this article is wikipedia, the free encyclopedia.  The text of this article is licensed under the GFDL.