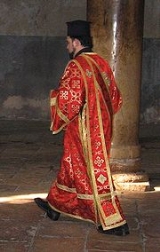 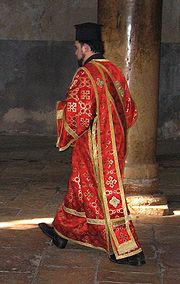 The Orarion is the distinguishing vestment of the deacon
Deacon
Deacon is a ministry in the Christian Church that is generally associated with service of some kind, but which varies among theological and denominational traditions...
and subdeacon
Subdeacon
-Subdeacons in the Orthodox Church:A subdeacon or hypodeacon is the highest of the minor orders of clergy in the Orthodox Church. This order is higher than the reader and lower than the deacon.-Canonical Discipline:...
in the Eastern Orthodox Church
Eastern Orthodox Church
The Orthodox Church, officially called the Orthodox Catholic Church and commonly referred to as the Eastern Orthodox Church, is the second largest Christian denomination in the world, with an estimated 300 million adherents mainly in the countries of Belarus, Bulgaria, Cyprus, Georgia, Greece,...
and Eastern Catholic Churches. It is a narrow stole, usually four to five inches (127 mm) wide and of various lengths, made of brocade, often decorated with crosses
Christian cross
The Christian cross, seen as a representation of the instrument of the crucifixion of Jesus Christ, is the best-known religious symbol of Christianity...
(three, five or seven`) embroidered
Embroidery
Embroidery is the art or handicraft of decorating fabric or other materials with needle and thread or yarn. Embroidery may also incorporate other materials such as metal strips, pearls, beads, quills, and sequins....
or appliqué
Applique
In its broadest sense, an appliqué is a smaller ornament or device applied to another surface. In the context of ceramics, for example, an appliqué is a separate piece of clay added to the primary work, generally for the purpose of decoration...
d along its length. It is usually trimmed with decorative banding
Trim (sewing)
Trim or trimming in clothing and home decorating is applied ornament, such as gimp, passementerie, ribbon, ruffles, or, as a verb, to apply such ornament....
around the edges and fringe
Fringe (trim)
Fringe is an ornamental textile trim applied to an edge of an item, such as drapery, a flag, epaulettes, or decorative tassel.Fringe originates in the ends of the warp, projecting beyond the woven fabric...
at the two ends.

The deacon wears the orarion over his left shoulder with the front portion draped over his left forearm. He will take this portion in his right hand when leading litanies
Ektenia
Ektenia , often called simply Litany, is a prayerful petition in the Eastern Orthodox/Eastern Catholic liturgy...
or drawing attention to a particular liturgical action. This single orarion is the oldest form, as illustrated in traditional and older iconography
Icon
An icon is a religious work of art, most commonly a painting, from Eastern Christianity and in certain Eastern Catholic churches...
.

Archdeacon
Archdeacon
An archdeacon is a senior clergy position in Anglicanism, Syrian Malabar Nasrani, Chaldean Catholic, and some other Christian denominations, above that of most clergy and below a bishop. In the High Middle Ages it was the most senior diocesan position below a bishop in the Roman Catholic Church...
s and protodeacon
Protodeacon
Protodeacon derives from the Greek proto- meaning 'first' and diakonos, which is a standard ancient Greek word meaning "servant", "waiting-man," "minister" or "messenger." The word in English may refer to various clergymen, depending upon the usage of the particular church in question.-Eastern...
s are awarded the much longer double orarion, which is worn over the left shoulder, wrapped around the chest and back, and brought back over the left shoulder to the front. The Archdeacon's orarion may also have the word "Holy" embroidered three times on it in large letters, using nomina sacra
Nomina sacra
Nomina sacra means "sacred names" in Latin, and can be used to refer to traditions of abbreviated writing of several frequently occurring divine names or titles in early Greek language Holy Scripture...
where customary, in reference to the Trisagion
Trisagion
The Trisagion , sometimes called by its opening line Agios O Theos or by the Latin Tersanctus, is a standard hymn of the Divine Liturgy in most of the Eastern Orthodox Churches, Oriental Orthodox Churches and Catholic Churches.In those Churches which use the Byzantine Rite, the Trisagion is chanted...
. In modern Greek Orthodox practice, all deacons usually wear the double orarion.

When preparing for Communion
Eucharist
The Eucharist , also called Holy Communion, the Sacrament of the Altar, the Blessed Sacrament, the Lord's Supper, and other names, is a Christian sacrament or ordinance...
, the deacon will tie the orarion around his waist, bringing the ends up over his shoulders (forming a cross in back) and then straight down in front, tucking them under the section around the waist.

Armenian usage is identical to the Byzantine Rite
Byzantine Rite
The Byzantine Rite, sometimes called the Rite of Constantinople or Constantinopolitan Rite is the liturgical rite used currently by all the Eastern Orthodox Churches, by the Greek Catholic Churches , and by the Protestant Ukrainian Lutheran Church...
, except that their deacons wear the single orarion, which they call urar.

Eastern Rite Catholics follow the same tradition as do their Orthodox counterparts. Sometimes in Greek Catholic
Greek Byzantine Catholic Church
The Greek Byzantine Catholic Church is a sui iuris particular Church in full union with the Roman Catholic Church which uses the Byzantine liturgical rite in the Koine Greek and modern Greek languages...
practice, the double orarion is worn only over the left shoulder (folded to make up for length) over a cassock
Cassock
The cassock, an item of clerical clothing, is an ankle-length robe worn by clerics of the Roman Catholic Church, Eastern Orthodox Church, Anglican Church, Lutheran Church and some ministers and ordained officers of Presbyterian and Reformed churches. Ankle-length garment is the meaning of the...
if the deacon in question is preaching, but not participating otherwise. This use of the orarion on top of a cassock is most often seen among Greek-Catholics of the Ukrainian
Ukrainian Greek Catholic Church
The Ukrainian Greek Catholic Church , Ukrainska Hreko-Katolytska Tserkva), is the largest Eastern Rite Catholic sui juris particular church in full communion with the Holy See, and is directly subject to the Pope...
and Ruthenian
Ruthenian Catholic Church
The Ruthenian Catholic Church is a sui iuris Eastern Catholic Church , which uses the Divine Liturgy of the Constantinopolitan Byzantine Eastern Rite. Its roots are among the Rusyns who lived in the region called Carpathian Ruthenia, in and around the Carpathian Mountains...
tradition; this is a marked departure from general Byzantine practice, in which there is no tradition of wearing the orarion without sticharion
Sticharion
The sticharion is a liturgical vestment of the Eastern Orthodox and Eastern Catholic Churches, roughly analogous in function to the alb of the Western Church...
.

The subdeacon
Subdeacon
-Subdeacons in the Orthodox Church:A subdeacon or hypodeacon is the highest of the minor orders of clergy in the Orthodox Church. This order is higher than the reader and lower than the deacon.-Canonical Discipline:...
also wears the orarion, but always wrapped around his body in the manner described above. In the Greek
Greek Orthodox Church
The Greek Orthodox Church is the body of several churches within the larger communion of Eastern Orthodox Christianity sharing a common cultural tradition whose liturgy is also traditionally conducted in Koine Greek, the original language of the New Testament...
tradition, tonsure
Tonsure
Tonsure is the traditional practice of Christian churches of cutting or shaving the hair from the scalp of clerics, monastics, and, in the Eastern Orthodox Church, all baptized members...
d taper-bearers wear the orarion similarly crossed in back, but with the ends hanging parallel in front. In the same Greek tradition, altar-servers will sometimes be given a blessing to wear the orarion with the ends hanging parallel in front.

In Slavic Orthodox
Slavic Orthodox
Slavic Orthodox Church or Slavonic Orthodox Church is an umbrella term for East Orthodox churches that use Church Slavonic in liturgy, the latter being of Byzantine Rite...
use, no one below the rank of subdeacon is usually permitted to wear the orarion. However, readers and altar server
Altar server
An altar server is a lay assistant to a member of the clergy during a Christian religious service. An altar server attends to supporting tasks at the altar such as fetching and carrying, ringing the altar bell and so on....
s are sometimes given a blessing by the bishop
Bishop
A bishop is an ordained or consecrated member of the Christian clergy who is generally entrusted with a position of authority and oversight. Within the Catholic Church, Eastern Orthodox, Oriental Orthodox Churches, in the Assyrian Church of the East, in the Independent Catholic Churches, and in the...
to vest in the orarion and perform some limited functions of a subdeacon. This is usually in cases where a man has been discerned to have a vocation to the subdiaconate and plans to marry but has not yet done so. The canons
Canon law
Canon law is the body of laws & regulations made or adopted by ecclesiastical authority, for the government of the Christian organization and its members. It is the internal ecclesiastical law governing the Catholic Church , the Eastern and Oriental Orthodox churches, and the Anglican Communion of...
require that if a man is to marry, he must do so before ordination to the subdiaconate, and that anybody who marries after subdiaconal ordination is to be deposed.