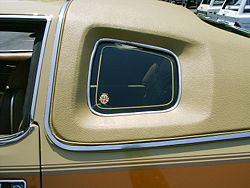 Opera Windows are small porthole
Porthole
A porthole is a generally circular, window used on the hull of ships to admit light and air. Porthole is actually an abbreviated term for "port hole window"...
sized side windows in the C-pillar of some cars. Typically offered in unison with a vinyl roof
Vinyl roof
Vinyl roof refers to a vinyl covering for an automobile's top. This covering was originally designed to give the appearance of a convertible to models with a fixed roof, but eventually it evolved into a styling statement in its own right. Vinyl roofs were most popular in the American market, and...
, they were a very common design feature of American automobile
Automobile
An automobile, autocar, motor car or car is a wheeled motor vehicle used for transporting passengers, which also carries its own engine or motor...
s during the 1970s. The design was new at the time, "... and would prove to be very popular, indicated by its imitation by almost every domestic manufacturer. The opera window was a fixed rear side window surrounded by a vinyl roof." Automotive design
Automotive design
Automotive design is the profession involved in the development of the appearance, and to some extent the ergonomics, of motor vehicles or more specifically road vehicles. This most commonly refers to automobiles but also refers to motorcycles, trucks, buses, coaches, and vans...
ers hoped that incorporating opera windows in their cars would serve as a marketing tool by helping to evoke in consumers' minds the elegance and romance of a night at the opera
Opera
Opera is an art form in which singers and musicians perform a dramatic work combining text and musical score, usually in a theatrical setting. Opera incorporates many of the elements of spoken theatre, such as acting, scenery, and costumes and sometimes includes dance...
.

This design element was used during the classical era of automobile styling. For example, “...the Elcar
Elcar
The Elcar was an American automobile manufactured from 1915 until 1931. The car was produced by the Elkhart Carriage Company of Elkhart, Indiana, which had been in business for over 30 years before producing its first car.-Production:...
in 1924 was good looking...and even a fabric top in the style of a brougham with oval opera windows framed by landau bars.... Opera windows saw their demise in the 1930s. Perhaps the most notable return was the "porthole" in the 1956-57 Ford Thunderbird
Ford Thunderbird
The Thunderbird , is an automobile manufactured by the Ford Motor Company in the United States over eleven model generations from 1955 through 2005...
. It was provided as an option to improve rear-quarter visibility with the removable hardtop in place... Opera windows were once again reintroduced on the 1972 Lincoln Continental Mark IV
Lincoln Continental Mark IV
See Lincoln Mark for a complete overview of the Lincoln Mark Series.The Lincoln Continental Mark IV was a luxury car at the top end of the personal luxury car market sold under the Lincoln brand of the Ford Motor Company in North America between 1972 and 1976. It replaced the successful...
as an optional luxury feature, but it was almost universally ordered.

During the 1970s they became a very common design element. “...The hottest thing going was the "porthole" window in the rear side pillar - called "opera windows" that came in during the horse and buggy [era]... Most often, they were applied on two-door hardtop
Hardtop
A hardtop is a term for a rigid, rather than canvas, automobile roof. It has been used in several contexts: detachable hardtops, retractable hardtop roofs, and the so-called pillarless hardtop body style....
or coupé
Coupé
A coupé or coupe is a closed car body style , the precise definition of which varies from manufacturer to manufacturer, and over time...
models and in all types of vehicles, from economy compacts
Compact car
A compact car , or small family car , is a classification of cars which are larger than a supermini but smaller than or equal to a mid-size car...
to luxury brands. They also “were recognition elements” in the specialty, personal-sized car market. Practically all cars in the personal luxury
Personal luxury car
A personal luxury car is a highly styled, luxury vehicle with an emphasis on image over practicality. Accenting the comfort and satisfaction of its owner and driver above all else, the personal luxury car sometimes sacrifices passenger capacity, cargo room, and fuel economy in favor of style and...
market offered these windows as part of their seemingly vintage-oriented styling.

The windows were intended to offset the significant blind spots
Blind spot (automobile)
A blind spot in a vehicle is an area around the vehicle that cannot be directly observed by the driver while at the controls, under existing circumstances...
created by the very wide C-pillars that were characteristic of American cars produced at this time. Even narrow opera windows helped rear visibility. In an age of decreasing dimensions and increasingly common use of non-opening rear side windows on 2-door models, the small opera windows helped rear passengers to be somewhat less claustrophobic
Claustrophobia
Claustrophobia is the fear of having no escape and being closed in small spaces or rooms...
.

These windows were usually non-functional; however, in the case of the AMC Matador
AMC Matador
The AMC Matador is a mid-size car that was built and sold by American Motors Corporation from 1971 to 1978. The Matador came in two generations: 1971 to 1973 and a major redesign from 1974 to 1978...
coupe NASCAR
NASCAR
The National Association for Stock Car Auto Racing is a family-owned and -operated business venture that sanctions and governs multiple auto racing sports events. It was founded by Bill France Sr. in 1947–48. As of 2009, the CEO for the company is Brian France, grandson of the late Bill France Sr...
racers, the small windows that came with the Barcelona II trim package
Trim package
A trim package is an automotive package composed by a set of cosmetic embellishments to a vehicle. In some cases the trim package may include a specific model or ending name...
actually helped to clean up the aerodynamics
Aerodynamics
Aerodynamics is a branch of dynamics concerned with studying the motion of air, particularly when it interacts with a moving object. Aerodynamics is a subfield of fluid dynamics and gas dynamics, with much theory shared between them. Aerodynamics is often used synonymously with gas dynamics, with...
when such windows were open to the wind under racing conditions.

In some cars, an additional feature was the so-called opera light that was mounted on the outside of the B-pillar or C-pillar and lit up when the exterior lights were turned on. (See 1980s Lincoln Town Car, 1979-91 Mercury Grand Marquis, or high-end models of the 1988-1990 Oldsmobile 88).

Opera windows had fallen into disuse by the mid-1980s, as changing automotive styles moved away from the upright notchback
Notchback
Notchback is a styling term describing a car body style, a variation of three-box styling where the third distinct volume or "box" is less pronounced — especially where the rear deck is short or where the rear window is upright...
. Smaller, more aerodynamic cars made opera windows appear gaudy or out of place. Contemporary examples of opera windows are sometimes found on modified or customized
Custom car
A custom car is a passenger vehicle that has been modified in either of the following two ways. First, a custom car may be altered to improve its performance, often by altering or replacing the engine and transmission. Second, a custom car may be a personal "styling" statement, making the car look...
automobiles.