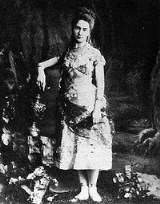 Encyclopedia
Ekaterina Vazem was a Russian
Russians
The Russian people are an East Slavic ethnic group native to Russia, speaking the Russian language and primarily living in Russia and neighboring countries....
prima ballerina. She was made famous for first dancing the role of Nikiya in 1877 Marius Petipa
Marius Petipa
Victor Marius Alphonse Petipa was a French ballet dancer, teacher and choreographer. Petipa is considered to be the most influential ballet master and choreographer of ballet that has ever lived....
's ballet, La Bayadère
La Bayadère
La Bayadère is a ballet, originally staged in four acts and seven tableaux by French choreographer Marius Petipa to the music of Ludwig Minkus. La Bayadère was first performed by the Imperial Ballet at the Imperial Bolshoi Kamenny Theatre in St. Petersburg, Russia, on...
. She went on to become the teacher of legendary prima ballerina Anna Pavlova. 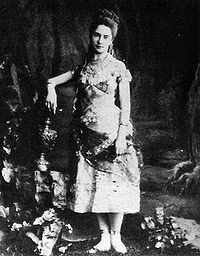 During the mid to late 19th century Russian ballet was dominated by foreign artists, though during the late 1860s through the early 1880s the theatre administration encouraged the promotion of native talent. Vazem – a terre-à-terre virtuosa – climbed the ranks of the Imperial Ballet to become one of the company's most celebrated dancers. Despite being a benefit performance for Vazem, with tickets being more expensive than for the opera, the first performance of La Bayadère played to a full house. At the end of the performance the audience applauded for more than half an hour. Reviews were uniformly complimentary although they did register complaints of Petipa's license in dealing with historical facts. They also dwelt on the unavoidable mishaps that befall most first performances. For example, in the Kingdom of the Shades scene, the appearance of a magic palace was mistimed and delayed until after Nikiya had turned to face it.
The source of this article is wikipedia, the free encyclopedia.  The text of this article is licensed under the GFDL.