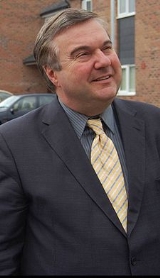 Encyclopedia
Oliver Heald is a British barrister
Barrister
A barrister is a member of one of the two classes of lawyer found in many common law jurisdictions with split legal professions. Barristers specialise in courtroom advocacy, drafting legal pleadings and giving expert legal opinions...
and Conservative
Conservative Party (UK)
The Conservative Party, formally the Conservative and Unionist Party, is a centre-right political party in the United Kingdom that adheres to the philosophies of conservatism and British unionism. It is the largest political party in the UK, and is currently the largest single party in the House...
politician
Politician
A politician, political leader, or political figure is an individual who is involved in influencing public policy and decision making...
, and the Member of Parliament
Member of Parliament
A Member of Parliament is a representative of the voters to a :parliament. In many countries with bicameral parliaments, the term applies specifically to members of the lower house, as upper houses often have a different title, such as senate, and thus also have different titles for its members,...
(MP) for North East Hertfordshire.

Heald was born in Reading, Berkshire
Reading, Berkshire
Reading is a large town and unitary authority area in England. It is located in the Thames Valley at the confluence of the River Thames and River Kennet, and on both the Great Western Main Line railway and the M4 motorway, some west of London....
, and was educated at the Reading School
Reading School
Reading School is a state-funded, selective academy school for boys in the English town of Reading. It is notable for tracing its history back to the school of Reading Abbey, making it one of the oldest schools in England. There are no tuition fees for day pupils, and boarders only pay for food and...
and Pembroke College, Cambridge
Pembroke College, Cambridge
Pembroke College is a constituent college of the University of Cambridge, England.The college has over seven hundred students and fellows, and is the third oldest college of the university. Physically, it is one of the university's larger colleges, with buildings from almost every century since its...
where he studied law
Law
Law is a system of rules and guidelines which are enforced through social institutions to govern behavior, wherever possible. It shapes politics, economics and society in numerous ways and serves as a social mediator of relations between people. Contract law regulates everything from buying a bus...
. He was called to the bar
Call to the bar
The Call to the Bar is a legal term of art in most common law jurisdictions where persons must be qualified to be allowed to argue in court on behalf of another party, and are then said to have been "called to the bar" or to have received a "call to the bar"...
at the Middle Temple
Middle Temple
The Honourable Society of the Middle Temple, commonly known as Middle Temple, is one of the four Inns of Court exclusively entitled to call their members to the English Bar as barristers; the others being the Inner Temple, Gray's Inn and Lincoln's Inn...
in 1977 and was a practising barrister
Barrister
A barrister is a member of one of the two classes of lawyer found in many common law jurisdictions with split legal professions. Barristers specialise in courtroom advocacy, drafting legal pleadings and giving expert legal opinions...
in London and East Anglia
East Anglia
East Anglia is a traditional name for a region of eastern England, named after an ancient Anglo-Saxon kingdom, the Kingdom of the East Angles. The Angles took their name from their homeland Angeln, in northern Germany. East Anglia initially consisted of Norfolk and Suffolk, but upon the marriage of...
from 1979 until he became a government minister in 1995.

In parliament
Palace of Westminster
The Palace of Westminster, also known as the Houses of Parliament or Westminster Palace, is the meeting place of the two houses of the Parliament of the United Kingdom—the House of Lords and the House of Commons...
he served on the education select committee for two years from 1992. He was appointed as the Parliamentary Private Secretary
Parliamentary Private Secretary
A Parliamentary Private Secretary is a role given to a United Kingdom Member of Parliament by a senior minister in government or shadow minister to act as their contact for the House of Commons; this role is junior to that of Parliamentary Under-Secretary, which is a ministerial post, salaried by...
(PPS) to the Minister of State
Minister of State
Minister of State is a title borne by politicians or officials in certain countries governed under a parliamentary system. In some countries a "minister of state" is a junior minister, who is assigned to assist a specific cabinet minister...
at the Home Office
Home Office
The Home Office is the United Kingdom government department responsible for immigration control, security, and order. As such it is responsible for the police, UK Border Agency, and the Security Service . It is also in charge of government policy on security-related issues such as drugs,...
Peter Lloyd
Peter Lloyd (politician)
Sir Peter Robert Cable Lloyd, is a retired English Conservative Party politician.Sir Peter was Member of Parliament for Fareham in the south of England from 1979 to 2001, when he retired and was succeeded by Mark Hoban....
in 1994. Later in the year he became the PPS to the Minister of Agriculture, Fisheries and Food
Minister of Agriculture, Fisheries and Food
The Minister of Agriculture, Fisheries and Food was a UK cabinet position, responsible for the Ministry of Agriculture, Fisheries and Food. The post was originally named President of the Board of Agriculture and was created in 1889...
William Waldegrave
William Waldegrave, Baron Waldegrave of North Hill
William Arthur Waldegrave, Baron Waldegrave of North Hill, PC , is an English Conservative politician who served in the Cabinet from 1990 until 1997 and is a Life Member of the Tory Reform Group. He is now a life peer. Lord Waldegrave is also the Chairman of the Rhodes Trust and the Chairman of...
. He was promoted to serve in the government of John Major
John Major
Sir John Major, is a British Conservative politician, who served as Prime Minister of the United Kingdom and Leader of the Conservative Party from 1990–1997...
in 1995 when he was appointed as the Parliamentary Under Secretary of State at the Department of Social Security
Department of Social Security
The Department of Social Security is the name of a defunct governmental agency in the United Kingdom.The DSS replaced the older Department of Health and Social Security, from 1988 until 2001, when it was itself largely replaced as a department of the Government of the United Kingdom by the...
, where he remained until the fall of the Conservative government in 1997. In 1995 he introduced the Insurance Companies (Reserves) Act.http://www.opsi.gov.uk/acts/acts1995/Ukpga_19950029_en_1.htm

Following the 1997 general election
United Kingdom general election, 1997
The United Kingdom general election, 1997 was held on 1 May 1997, more than five years after the previous election on 9 April 1992, to elect 659 members to the British House of Commons. The Labour Party ended its 18 years in opposition under the leadership of Tony Blair, and won the general...
he became an Opposition Whip
Whip (politics)
A whip is an official in a political party whose primary purpose is to ensure party discipline in a legislature. Whips are a party's "enforcers", who typically offer inducements and threaten punishments for party members to ensure that they vote according to the official party policy...
under the new leadership of William Hague
William Hague
William Jefferson Hague is the British Foreign Secretary and First Secretary of State. He served as Leader of the Conservative Party from June 1997 to September 2001...
, before moving on to become a spokesman on home affairs
Home Office
The Home Office is the United Kingdom government department responsible for immigration control, security, and order. As such it is responsible for the police, UK Border Agency, and the Security Service . It is also in charge of government policy on security-related issues such as drugs,...
with responsibility for police matters. He was made a spokesman on health
Department of Health (United Kingdom)
The Department of Health is a department of the United Kingdom government with responsibility for government policy for health and social care matters and for the National Health Service in England along with a few elements of the same matters which are not otherwise devolved to the Scottish,...
by Iain Duncan Smith
Iain Duncan Smith
George Iain Duncan Smith is a British Conservative politician. He is currently the Secretary of State for Work and Pensions and was previously leader of the Conservative Party from September 2001 to October 2003...
for a year in 2001, until he joined his shadow cabinet
Shadow Cabinet
The Shadow Cabinet is a senior group of opposition spokespeople in the Westminster system of government who together under the leadership of the Leader of the Opposition form an alternative cabinet to the government's, whose members shadow or mark each individual member of the government...
as the Shadow Secretary of State for Work and Pensions
Secretary of State for Work and Pensions
The Secretary of State for Work and Pensions is a post in the British Cabinet, responsible for the Department for Work and Pensions. It was created on 8 June 2001 by the merger of the Employment part of the Department for Education and Employment and the Department of Social Security.The Ministry...
in 2002. He was appointed Shadow Leader of the House of Commons
Shadow Leader of the House of Commons
The Shadow Leader of the House of Commons is a member of the Official Opposition Shadow Cabinet responsible for working with the Leader of the House in arranging Commons business and holding the Government to account in its overall management of the House...
by Michael Howard
Michael Howard
Michael Howard, Baron Howard of Lympne, CH, QC, PC is a British politician, who served as the Leader of the Conservative Party and Leader of the Opposition from November 2003 to December 2005...
in 2003. In 2004 he was then appointed to serve as Shadow Secretary of State for Constitutional Affairs
Secretary of State for Constitutional Affairs
The Secretary of State for Justice is a senior position in the cabinet of the United Kingdom. It was created in 2007 replacing the abolished Secretary of State for Constitutional Affairs, which was originally intended to fulfil those functions of the office of Lord Chancellor which related to the...
and in 2005 was appointed by David Cameron
David Cameron
David William Donald Cameron is the current Prime Minister of the United Kingdom, First Lord of the Treasury, Minister for the Civil Service and Leader of the Conservative Party. Cameron represents Witney as its Member of Parliament ....
as the Shadow Chancellor of the Duchy of Lancaster
Chancellor of the Duchy of Lancaster
The Chancellor of the Duchy of Lancaster is, in modern times, a ministerial office in the government of the United Kingdom that includes as part of its duties, the administration of the estates and rents of the Duchy of Lancaster...
.

He takes a particular interest in healthcare
Health care
Health care is the diagnosis, treatment, and prevention of disease, illness, injury, and other physical and mental impairments in humans. Health care is delivered by practitioners in medicine, chiropractic, dentistry, nursing, pharmacy, allied health, and other care providers...
. He is married to Christine (née Whittle) and they have a son and two daughters. They live in the constituency, in the market town of Royston
Royston, Hertfordshire
Royston is a town and civil parish in the District of North Hertfordshire and county of Hertfordshire in England.It is situated on the Greenwich Meridian, which brushes the towns western boundary, and at the northernmost apex of the county on the same latitude of towns such as Milton Keynes and...
. He cites Willie Whitelaw
William Whitelaw, 1st Viscount Whitelaw
William Stephen Ian Whitelaw, 1st Viscount Whitelaw, KT, CH, MC, PC, DL , often known as Willie Whitelaw, was a British Conservative Party politician who served in a wide number of Cabinet positions, most notably as Home Secretary and Deputy Prime Minister.-Early life:Whitelaw was born in Nairn, in...
as a mentor.