Encyclopedia
The Old Parliament building at Stadiou Street
Stadiou Street
Stadiou Street is Athens' major street linking the Omonoia and Syntagma Squares. It runs diagonally and is one-way from northwest to southeast...
in Athens
Athens
Athens , is the capital and largest city of Greece. Athens dominates the Attica region and is one of the world's oldest cities, as its recorded history spans around 3,400 years. Classical Athens was a powerful city-state...
, housed the Greek Parliament between 1875 and 1932. It now houses the country's National Historical Museum (Εθνικό Ιστορικό Μουσείο, Ethnikó Istorikó Mouseío).

The site was originally occupied by the house of the Athenian magnate and politician, Alexandros Kontostavlos. After Athens became the capital of Greece in 1833, King Otto
Otto of Greece
Otto, Prince of Bavaria, then Othon, King of Greece was made the first modern King of Greece in 1832 under the Convention of London, whereby Greece became a new independent kingdom under the protection of the Great Powers .The second son of the philhellene King Ludwig I of Bavaria, Otto ascended...
selected it as temporary residence, pending the construction of the Royal Palace (which houses Parliament today). In 1835, a large dance and banquet hall was added to the house, and after the 3 September 1843 Revolution, which forced King Otto to grant a constitution
Greek Constitution of 1844
The first constitution of the Kingdom of Greece was the Greek Constitution of 1844. On 3 September 1843, the military garrison of Athens, with the help of citizens, rebelled and demanded from King Otto the concession of a Constitution....
, the National Assembly convened here. In October 1854, however, the house burned down in a fire. Construction of a new building then began in August 1858, with the foundation laid by Queen Amalia, on plans by French architect
Architect
An architect is a person trained in the planning, design and oversight of the construction of buildings. To practice architecture means to offer or render services in connection with the design and construction of a building, or group of buildings and the space within the site surrounding the...
François Boulanger. Construction was halted the next year due to lack of funds, and not restarted until after Otto's overthrow in 1863; the plans were then modified by the Greek architect Panagiotis Kalkos, and construction was complete by 1871. In the interim, Parliament had been housed in a brick building on the back of the square, hastily erected in 1863, which became colloquially known as "the Shanty" (η Παράγκα).

The Hellenic Parliament would remain in the building from 1875 until its move to its current location in the Old Palace in 1932. As such, it witnessed some of the most turbulent and important events in modern Greek history, including the assassination of Prime Minister
Prime Minister of Greece
The Prime Minister of Greece , officially the Prime Minister of the Hellenic Republic , is the head of government of the Hellenic Republic and the leader of the Greek cabinet. The current interim Prime Minister is Lucas Papademos, a former Vice President of the European Central Bank, following...
Theodoros Deligiannis
Theodoros Deligiannis
Theodoros Deligiannis, also spelled Delijannis and Deliyannis, , was a Greek statesman.-Life:He was born at Lagkadia, Arcadia. He studied law in Athens, and in 1843 entered the Ministry of the Interior, of which department he became permanent secretary in 1859. In 1862, on the deposition of King...
on the Parliament steps on 13 June 1905, and the declaration of the Republic
Second Hellenic Republic
The Second Hellenic Republic is the term used to describe the political regime of Greece from 1924 to 1935. It followed from the period of the constitutional monarchy under the monarchs of the House of Glücksburg, and lasted until its overthrow in a military coup d'état which restored the monarchy...
on 25 March 1924. After the parliament was moved, the building housed the Ministry of Justice. In 1961 the building underwent extensive restoration and became the seat of the National History Museum, administered by the Historical and Ethnological Society of Greece. 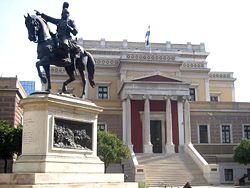 In front of the building stands a large equestrian statue of General Theodoros Kolokotronis
Theodoros Kolokotronis
Theodoros Kolokotronis was a Greek Field Marshal and one of the leaders of the Greek War of Independence against the Ottoman Empire....
, cast in bronze. It was sculpted by Lazaros Sochos in Paris in 1900, and erected in its current place in 1904. Its pedestal
Pedestal
Pedestal is a term generally applied to the support of a statue or a vase....
features bronze reliefs of the Battle of Dervenakia, and of a session of the Peloponnesian Senate during the Greek Revolution. The statue faces Stadiou Street; Kolokotronis turns his head towards the Parliament House and his hand is pointing the opposite way where, during the 19th century, the Royal Mews
Mews
Mews is a primarily British term formerly describing a row of stables, usually with carriage houses below and living quarters above, built around a paved yard or court, or along a street, behind large city houses, such as those of London, during the 17th and 18th centuries. The word may also...
were located. According to a popular joke, the hero of the Revolution
Greek War of Independence
The Greek War of Independence, also known as the Greek Revolution was a successful war of independence waged by the Greek revolutionaries between...
was showing parliamentarians that, because of their subservience to the King, the stable
Stable
A stable is a building in which livestock, especially horses, are kept. It most commonly means a building that is divided into separate stalls for individual animals...
s were their rightful place.

The collection contains historical items concerning the period from the fall of Constantinople
Fall of Constantinople
The Fall of Constantinople was the capture of the capital of the Byzantine Empire, which occurred after a siege by the Ottoman Empire, under the command of Ottoman Sultan Mehmed II, against the defending army commanded by Byzantine Emperor Constantine XI...
to the Ottomans
Ottoman Empire
The Ottoman EmpireIt was usually referred to as the "Ottoman Empire", the "Turkish Empire", the "Ottoman Caliphate" or more commonly "Turkey" by its contemporaries...
in 1453 to the Second World War, focusing especially in the period of the Greek Revolution and the subsequent establishment of the modern Greek state. Among the items displayed are weapons, personal belongings and memorabilia from historical personalities, historical paintings by Greek and foreign artists, manuscripts, as well as a large collection of traditional costumes from the various regions of Greece. The collection is displayed in the corridors and rooms of the building, while the great central hall of the National Assembly is used for conferences.