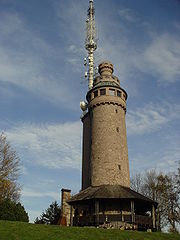 The observation tower Baden-Baden Merkur is an observation tower
Observation tower
An observation tower is a structure used to view events from a long distance and to create a full 360 degree range of vision. They are usually at least tall and made from stone, iron, and wood. Many modern towers are also used as TV towers, restaurants, or churches...
on Mount Merkur
Merkur (Baden-Baden)
Merkur is a mountain of the northern Black Forest, Baden-Württemberg, Germany. It is located between Baden-Baden and Gernsbach. A funicular railway, the Merkurbergbahn, climbs the mountain from Baden-Baden. An observation and radio tower stands atop the Merkur....
near Baden-Baden
Baden-Baden
Baden-Baden is a spa town in Baden-Württemberg, Germany. It is located on the western foothills of the Black Forest, on the banks of the Oos River, in the region of Karlsruhe...
, at 8°16'50" E and 48°45'52" N. The tower has been in use since April 8, 1950 by the former SWF (now SWR) as a transmission tower for FM
FM broadcasting
FM broadcasting is a broadcasting technology pioneered by Edwin Howard Armstrong which uses frequency modulation to provide high-fidelity sound over broadcast radio. The term "FM band" describes the "frequency band in which FM is used for broadcasting"...
-radio and, since 1953, television
Television
Television is a telecommunication medium for transmitting and receiving moving images that can be monochrome or colored, with accompanying sound...
.

At the end of the 1970s the tower was completely renovated and its radio equipment modified. An underground equipment room for radiotechnical equipment was built, and a new tower was constructed, adjoining the older tower. In this tower also an elevator for visitors was installed. Built between autumn 1980 and December 1982, it is twenty three metres high, constructed from steel
Steel
Steel is an alloy that consists mostly of iron and has a carbon content between 0.2% and 2.1% by weight, depending on the grade. Carbon is the most common alloying material for iron, but various other alloying elements are used, such as manganese, chromium, vanadium, and tungsten...
and concrete
Concrete
Concrete is a composite construction material, composed of cement and other cementitious materials such as fly ash and slag cement, aggregate , water and chemical admixtures.The word concrete comes from the Latin word...
, and carrying a forty metre high aerial
Antenna (radio)
An antenna is an electrical device which converts electric currents into radio waves, and vice versa. It is usually used with a radio transmitter or radio receiver...
mast with FM- and TV-aerials on its top.
The source of this article is wikipedia, the free encyclopedia.  The text of this article is licensed under the GFDL.