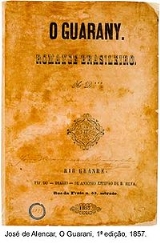 Encyclopedia
The Guarani: Brazilian Novel is a 1857
1857 in literature
The year 1857 in literature involved some significant new books.-Events:*Jules Verne marries Honorine de Viane Morel.*The illustrated weekly, Über Land and Meer, is founded by Friedrich Wilhelm Hackländer and Edmund von Zoller....
Brazilian novel written by José de Alencar
José de Alencar
José Martiniano de Alencar was a Brazilian lawyer, politician, orator, novelist and dramatist. He is one of the most famous writers of the first generation of Brazilian Romanticism, writing historical, regionalist and Indianist romances — being the most famous The Guarani...
. It first came out as a feuilleton
Feuilleton
Feuilleton was originally a kind of supplement attached to the political portion of French newspapers, consisting chiefly of non-political news and gossip, literature and art criticism, a chronicle of the latest fashions, and epigrams, charades and other literary trifles...
in the newspaper Diário do Rio de Janeiro, but due to its enormous success Alencar decided to compile his writing in a volume. A plausible explanation for this success might be in the fact that novel spoke of freedom and independence, arguing for a nativeness that could be found in tropical Nature and in the indigenous people of Brazil
Brazil
Brazil , officially the Federative Republic of Brazil , is the largest country in South America. It is the world's fifth largest country, both by geographical area and by population with over 192 million people...
.

Years later the novel was turned into an opera performed in Italian and called Il Guarany
Il Guarany
Il Guarany is an opera ballo composed by Antônio Carlos Gomes, based on the novel O Guarani, written by José de Alencar. The libretto was written by Antonio Scalvini and Carlo D'Ormeville.-Performance history:...
(1870), by Carlos Gomes, among other places it was presented in Milan and New York (it is a known fact that the author did not appreciate the final result).O Guarani is regarded a foundational text of Brazilian Romanticism, but it gained international projection by being translated into Spanish, German (Der Guarany, Brasilianischer Roman, Maximillian Emerich, 1876) and English (The Guarany, Brazilian novel, James W. Hawes, 1893).

The novel is still widely read nowadays, especially at Brazilian schools as an introduction to novel reading, but also by anyone who enjoys a thrilling adventure story. Literary criticism has tended to link O Guarani to the works of Fenimore Cooper, Chateaubriand and the noble savage
Noble savage
The term noble savage , expresses the concept an idealized indigene, outsider , and refers to the literary stock character of the same...
from the Rousseauesque tradition. However, this interpretation of the novel has become outdated as recent academic works show also how dark, sexual and gothic the novel is.

O Guarany is set back in 1604, a period when Portugal
Portugal
Portugal , officially the Portuguese Republic is a country situated in southwestern Europe on the Iberian Peninsula. Portugal is the westernmost country of Europe, and is bordered by the Atlantic Ocean to the West and South and by Spain to the North and East. The Atlantic archipelagos of the...
and its colonies submitted to Spanish dominion due to a lack of heirs to ascend to the throne. Alencar takes advantage of this dynastic complication to resurrect the historical figure of D. Antônio de Mariz, a nobleman connected to the foundation of the city of Rio de Janeiro
Rio de Janeiro
Rio de Janeiro , commonly referred to simply as Rio, is the capital city of the State of Rio de Janeiro, the second largest city of Brazil, and the third largest metropolitan area and agglomeration in South America, boasting approximately 6.3 million people within the city proper, making it the 6th...
and a pioneer settler. This historical (factual) background, which orients the novel throughout, is set in the first two chapters; then fantasy, both violent and erotic, starts to prevail.

D. Antônio establishes himself in a deserted inland region, a few days’ travel from the seaside city of Rio. The land was granted to him through his services to the Portuguese crown, whose legitimacy the nobleman now distrusts. To be politically independent (if not economically) and keep to the Portuguese codes of honour, he builds a castle-like house to shelter his family in Brazilian soil where he lives like a feudal lord with his family and retainers.

His family consists of his severe wife D. Lauriana, his angelic fair, blue-eyed daughter Cecília, his dandyish son D. Diogo and the ‘niece’ Isabel, a cabocla who is in fact his illegitimate daughter by an Indian woman. Other people are also attached to his household, a few loyal servants, forty adventurers/mercenaries kept for protection, the young nobleman Álvaro de Sá, an appropriate suitor for his lawful daughter Cecília, and Peri, an Indian of the Guaraní people, who once saved Cecy’s life (as the romantic/romanticised Indian endearingly calls Cecília) and who has since deserted his tribe and family. Pery is the hero who gives title to the book, he is treated as a friend by D. Antônio and Cecy and as a nuisance by Mrs. Mariz and Isabel. The life of the characters is altered by the arrival of the adventurer Loredano (former friar Angelo di Lucca) who insinuates himself into the house and soon starts subverting the other vassals, planning to kidnap Cecília and scheming against the house of Mariz.