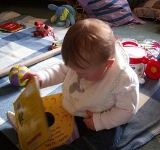 Nursery in England is also called FS1 which is the first year of foundation before they go into primary or infants.

The curriculum goals of a nursery school are more specific than for childcare, but less strenuous than for primary school. For example, the Scottish Early Years Framework and the Curriculum for Excellence
Curriculum for Excellence
Curriculum for Excellence is the national curriculum for Scottish Schools for learners from age 3 to 18. It was developed out of a 2002 consultation exercise – the 'National Debate on Education' – undertaken by the Scottish Executive on the state of school education...
define expected outcomes even at this age. In some areas, the provision of nursery school services is on a user pays
User pays
User pays, or beneficiary pays, is a pricing approach based on the idea that the most efficient allocation of resources occurs when consumers pay the full cost of the goods that they consume. In public finance it stands with another principle of "ability to pay," which states that those who have...
or limited basis while other governments fund nursery school services.

The reasons given include the importance of early years in cognitive development, the trouble many families have in providing adequate early-childhood nurturing, and the advantage such programs give students starting the next step in their education. The study considered a number of early childhood educational pilot programs for at risk children, similar to Head Start, but more intense, such as the Perry Project in Ypsilanti, Michigan
Ypsilanti, Michigan
Ypsilanti is a city in Washtenaw County in the U.S. state of Michigan. As of the 2000 census, the city population was 22,362. The city is bounded to the north by the Charter Township of Superior and on the west, south, and east by the Charter Township of Ypsilanti...
.

Over 40 years of the children's lives, participants showed greater literacy, higher grades, greater likelihood to graduate high school, higher post-high school employment rates, higher earnings, less need for welfare, committed less crime, and had lower rates of teen pregnancy. The rate of returns to the children was estimated to be 16 percent (about 3/4 of this is calculated from the decreased social cost due to lower crime and less prison spending).

The authors also propose that the return on investment declines with age. This study is significant because it advocates spending as an economic investment in a society's future, rather than in the interest of justice.

Until the mid 1980s, nursery schools only admitted pupils in the final year (three terms) leading up to their admission to primary school, but pupils now attend nursery school for four or five terms. It is also common practise for many children to attend nursery much earlier than this. Many nurseries have the facilities to take on babies, using the 'Early Years Foundation Stage', framework as a guide to give each child the best possible start to becoming a competent learner and skillful communicator.

Early years education in Wales
Wales
Wales is a country that is part of the United Kingdom and the island of Great Britain, bordered by England to its east and the Atlantic Ocean and Irish Sea to its west. It has a population of three million, and a total area of 20,779 km²...
is provided half-time for children aged 3–4 (Nursery) and full-time for those between the ages of 4 and 5 (Reception). Since 2005 it has been a statutory duty for all Local Education Authorities to secure sufficient nursery education in their area for children from the term following their third birthday.

Currently, the Early Years curriculum in Wales, produced by the Welsh Assembly Government
Welsh Assembly Government
The Welsh Government is the devolved government of Wales. It is accountable to the National Assembly for Wales, the legislature which represents the interests of the people of Wales and makes laws for Wales...
Department for Children, Education, Life-long Learning and Skills,is set out in the booklet "Desirable Outcomes for Children's Learning Before Compulsory School Age". However, a new 'Foundation Phase' covering 3-7 year olds is being rolled out across Wales from 2008, with a focus on 'learning through play', which covers seven areas of learning:

In Scotland
Scotland
Scotland is a country that is part of the United Kingdom. Occupying the northern third of the island of Great Britain, it shares a border with England to the south and is bounded by the North Sea to the east, the Atlantic Ocean to the north and west, and the North Channel and Irish Sea to the...
children are entitled to a place in a nursery class when they reach their third birthday. This gives parents the option of two years of funded pre-school education before beginning primary one, the first year of compulsory education. Nursery children who are three years old are referred to as ante-pre-school whilst children who are four years old are termed pre-school. Pre-school education in Scotland is planned around the Early Level of the Curriculum for Excellence
Curriculum for Excellence
Curriculum for Excellence is the national curriculum for Scottish Schools for learners from age 3 to 18. It was developed out of a 2002 consultation exercise – the 'National Debate on Education' – undertaken by the Scottish Executive on the state of school education...
which identifies Outcomes & Experiences around the following eight curricular areas:


Responsibility for the review of care standards in Scottish nurseries rests with the Care Commission.

As per usual, whoever wrote this article forgot that Northern Ireland is part of the UK.

In the United States
United States
The United States of America is a federal constitutional republic comprising fifty states and a federal district...
, nursery school is provided in a variety of settings. In general pre-school is meant to develop children through planned programs.

Pre-schools, both private and school sponsored, are available for children aged from three to five. Many of these programs follow similar curriculum as pre-kindergarten.

The goal of Head Start and Early Head Start is to increase the school readiness of young children in low income families. These programs serve children from birth to age five, pregnant women, and their families. Head Start was started by the Federal Government in 1964 to help meet the needs of disadvantaged pre-school children.

The office of Economic Opportunity launched Project Head Start as an eight-week summer program in 1965. It was then transferred to the Office of Child Development in the US Department of Health, Education, and Welfare in 1969. Today it is a program within the Administration on Children, Youth and Families in the Department of Health and Human Services. Programs are administered locally by school systems and non-profit organizations.