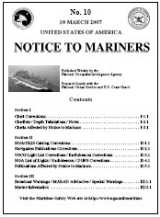 
A notice to mariners advises mariners of important matters affecting navigational safety, including new hydrographic information
Hydrography
Hydrography is the measurement of the depths, the tides and currents of a body of water and establishment of the sea, river or lake bed topography and morphology. Normally and historically for the purpose of charting a body of water for the safe navigation of shipping...
, changes in channel
Channel (geography)
In physical geography, a channel is the physical confine of a river, slough or ocean strait consisting of a bed and banks.A channel is also the natural or human-made deeper course through a reef, sand bar, bay, or any shallow body of water...
s and aids to navigation
Navigation
Navigation is the process of monitoring and controlling the movement of a craft or vehicle from one place to another. It is also the term of art used for the specialized knowledge used by navigators to perform navigation tasks...
, and other important data.

The U.S. Notice to Mariners made available weekly by the National Geospatial-Intelligence Agency
National Geospatial-Intelligence Agency
The National Geospatial-Intelligence Agency is an agency of the federal government of the United States with the primary mission of collecting, analyzing and distributing geospatial intelligence in support of national security. NGA was formerly known as the National Imagery and Mapping Agency ...
(NGA), prepared jointly with the National Ocean Service
National Ocean Service
The National Ocean Service , an office within the U.S. Department of Commerce National Oceanic and Atmospheric Administration, is responsible for preserving and enhancing the nation’s coastal resources and ecosystems along of shoreline bordering of coastal, Great Lakes, and ocean waters...
(NOS) and the U.S. Coast Guard. The information in the Notice to Mariners is formatted to simplify the correction of paper charts
Nautical chart
A nautical chart is a graphic representation of a maritime area and adjacent coastal regions. Depending on the scale of the chart, it may show depths of water and heights of land , natural features of the seabed, details of the coastline, navigational hazards, locations of natural and man-made aids...
, Sailing Directions
Sailing Directions
Sailing Directions is a 42-volume American navigation publication published by the National Geospatial-Intelligence Agency . Sailing Directions consists of 37 Enroute volumes, 4 Planning Guide volumes, and 1 volume combining both types...
, Light List
Light List
The United States Coast Guard Light List is an American navigation publication in 7 volumes made available yearly by the U.S. Coast Guard which gives information on lighted navigation aids, unlighted buoys, radiobeacons, radio direction finder calibration stations, daybeacons, racons, and LORAN...
s, and other publications produced by NGA, NOS, and the U.S. Coast Guard.

The Notice consists of a page of Hydrograms listing
important items in the notice, a chart correction
section organized by ascending chart number, a publications
correction section, and a summary of broadcast
navigation warnings and miscellaneous information. It is the responsibility of users to decide which of their
charts and publications require correction.
Mariners are requested to cooperate in the correction of
charts and publications by reporting all discrepancies between
published information and conditions actually
observed and by recommending appropriate improvements. A reporting form is provided in the back of each
Notice to Mariners.

Number 1 of each year contains important
information on a variety of subjects which supplements
information not usually found on charts and in navigational
publications. This information is published as Special Notice
to Mariners Paragraphs. Additional items considered
of interest to the mariner are also included in this Notice.

Much of the data
in the U.S. Notice to Mariners is obtained from foreign
notices.

The NOTMAR.gc.ca site is a free 24/7 service providing mariners with up-to-date safety advisories. It provides mariners with a quick and easy to use interface to access Notices to Mariners information. This system also generates weekly and monthly notification mailers, for its registered users. These on-line mail services provides the monthly Notices to Mariners publications as well as the weekly(section II - chart corrections) notices that advise the mariner of the notices that have been issued against their chart selections. These mail services simplify the process for our registered clients to update their publications and charts as required under the Canada Shipping Act.