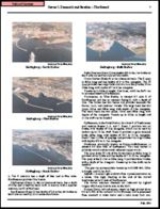 Sailing Directions is a 42-volume American navigation
Navigation
Navigation is the process of monitoring and controlling the movement of a craft or vehicle from one place to another. It is also the term of art used for the specialized knowledge used by navigators to perform navigation tasks...
publication published by the National Geospatial-Intelligence Agency
National Geospatial-Intelligence Agency
The National Geospatial-Intelligence Agency is an agency of the federal government of the United States with the primary mission of collecting, analyzing and distributing geospatial intelligence in support of national security. NGA was formerly known as the National Imagery and Mapping Agency ...
(NGA). Sailing Directions consists of 37 Enroute volumes, 4 Planning Guide volumes, and 1 volume combining both types. Planning Guides describe general features of ocean basins and country-specific information such as firing areas, pilotage requirements, regulations, search and rescue information, ship reporting systems, and time zones, to name a few; Enroutes describe features of coastlines, ports, and harbors.

Sailing Directions are updated when new data requires extensive revision of an existing text. These data are obtained from several sources, including, but not limited to, pilots and Sailing Directions from other countries.

One book comprises the Planning Guide and Enroute for Antarctica. This consolidation allows for a more effective presentation of material on this unique area. 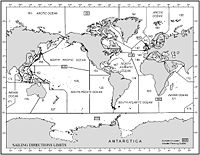 Planning Guide volumes assist the navigator in planning an extensive
oceanic voyage, as well as giving information on individual countries that is applicable to all ports in those countries. Each of the Planning Guides covers an area determined by an arbitrary division of the world’s seas.

Individual Planning Guides are divided into Countries and Ocean Basins, as follows:

Country entries may contain information on the following subjects—Buoyage Systems, Currency, Firing Areas, Fishing Areas, Government, Holidays, Ice, Industries, Languages, Mined Areas, Navigational Information (to include maritime claims, maritime boundary
Maritime boundary
Maritime boundary is a conceptual means of division of the water surface of the planet into maritime areas that are defined through surrounding physical geography or by human geography. As such it usually includes areas of exclusive national rights over the mineral and biological resources,...
disputes, and enroute volumes), Offshore Drilling, Pilotage, Pollution, Prohibited Areas, Regulations, Restricted Areas, Search and Resuce, Signals, Submarine Operating Areas, Time Zone, Traffic Separation Schemes, U.S. Embassy, and Vessel Traffic Services. Information that cannot be accurately depicted within the alphabeticized Country text may be listed as an Appendix at the end of the Country text.


Each Sailing Directions (Enroute) volume contains numbered sections along a coast or through a strait. Figure 404a illustrates this division. Each sector is discussed in turn. A preface with detailed information about
authorities, references, and conventions used in each book precedes the sector discussions. Finally, each book provides conversions between feet, fathoms, and meters.

The Chart Information Graphic, the first item in each chapter, is a graphic key for charts pertaining to a sector. See Figure 404b. The graduation of the border scale of the chartlet enables navigators to identify the largest scale chart for a location and to find a feature listed in the Index-Gazetteer.
These graphics are not maintained by Notice to Mariners; one should refer to the chart catalog for updated chart listings.

The Index-Gazetteer is an alphabetical listing of described and charted features. The Index lists each feature by geographic coordinates and sector number.