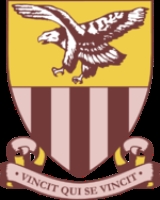 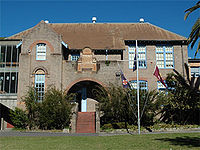 North Sydney Boys High School is an academically selective
Selective school (New South Wales)
Selective schools in New South Wales, Australia are government high schools operated by the New South Wales Department of Education and Training, that have accepted their students based upon their academic merit...
, public high school
High school
High school is a term used in parts of the English speaking world to describe institutions which provide all or part of secondary education. The term is often incorporated into the name of such institutions....
for boys, located at Crows Nest
Crows Nest, New South Wales
Crows Nest is a suburb on the lower North Shore of Sydney, New South Wales, Australia. Crows Nest is located 5 kilometres north of the Sydney central business district, in the local government area of North Sydney Council.-History:...
in Sydney, Australia
Australia
Australia , officially the Commonwealth of Australia, is a country in the Southern Hemisphere comprising the mainland of the Australian continent, the island of Tasmania, and numerous smaller islands in the Indian and Pacific Oceans. It is the world's sixth-largest country by total area...
.

North Sydney Boys began off site in temporary classes in 1912. At the end of 1914, 89 boys transferred to the permanent home on the corner of Falcon Street and Miller Street, Crows Nest. The School chose the Falcon as its logo according to the location of the school on Falcon Street, even going as far as to name its Old Boys Alumni "Old Falconians" in 1933. After years of controversy, it has been decided to celebrate the centenary in 2012.

The school has a history of academic excellence prompting Sir James Darling
James Ralph Darling
Sir James Ralph Darling OBE was the Headmaster of Geelong Grammar School , and Chairman of the Australian Broadcasting Commission .-Early life:...
, Headmaster of Geelong Grammar School
Geelong Grammar School
Geelong Grammar School is an independent, Anglican, co-educational, boarding and day school. The school's main campus is located at Corio, on the northern outskirts of Geelong, Victoria, Australia, overlooking Corio Bay and Limeburners Bay....
, to reflect that "North Sydney is the equal of, if not better than, any private school in Australia". He was referring to a 'golden era' in the 1950s and 60s when school's students set numerous records in the published results of the old NSW Leaving Certificate.
North Sydney still performs well in Higher School Certificate results today. In the NSW Higher School Certificate, North Sydney Boys is consistently one of the top ranked boys schools, and in 2004 it had the 6th highest number of recipients of the Premier's 'All Rounders' Award in the state. According to The Daily Telegraph
The Daily Telegraph
The Daily Telegraph is a daily morning broadsheet newspaper distributed throughout the United Kingdom and internationally. The newspaper was founded by Arthur B...
's Top 120 Schools, North Sydney Boys High School was ranked 3rd in the 2003 HSC, with 41 students achieving a University Admissions Index (UAI) of 99 or higher.

Teaching at North Sydney Boys High is divided amongst 10 departments, each teaching a variety of related Board of Studies endorsed subjects. The departments are: 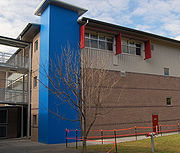 The School participates in sport against other schools in the Sydney North West Metropolitan Zone.

Other extracurricular sporting activities include:

An outdoor education program involving annual school camps is promoted as encouraging a 'Challenge by Choice' mentality. This program includes camps to:

All camps with the exception of the Year 11 camp are outsourced to Optimum Experiences Outdoor Adventures.

The School is also home to a comprehensive and highly regarded jazz music education program. Performance groups from this program have toured internationally, and are regularly requested to play at a variety of public and private functions. The Big Band 1 was the equal first Australian school jazz band to be invited to perform at the annual International Association of Jazz Education
International Association for Jazz Education (IAJE)
International Association for Jazz Education , formerly a not-for-profit corporation based in Manhattan, Kansas, was a volunteer-run organization that, among other things, allocated student scholarships through its approved festivals program. Its annual conference was a gathering point for...
conference in 2004. The jazz bands perform annually at the Merimbula Jazz Festival, on the New South Wales south coast.

Other music and drama related extracurricular activities include:

Other extracurricular activities include:

North Sydney Boys High School is undergoing a major capital building program funded by the State and Federal Governments. In DA1, completed in about 2003, the Keele Street Lawn area was acquired and refurbished. In DA2, completed in 2005, new tennis courts and other building works were carried out. A new building that includes music rehearsal spaces, visual art classrooms and design and technology workshops have been finished in term 4 of 2006 and students have moved into the new building, now named 'J Block'. A dedicated music computer lab is also available in the new building.

The school community also completed a major upgrade of the AF Henry Hall in 2005 including the addition of a mezzanine, new ceiling, lighting, stage, and stage curtains. In 2007 - 2009 six science labs were completely refurbished costing over $1million.

The school is now planning for an extension and complete refurbishment to the current library with building due to commence in 2012. Plans for the upgrading of outdoor recreation spaces has also begun.

Former students
Alumnus
An alumnus , according to the American Heritage Dictionary, is "a graduate of a school, college, or university." An alumnus can also be a former member, employee, contributor or inmate as well as a former student. In addition, an alumna is "a female graduate or former student of a school, college,...
of North Sydney Boys High School are known as 'Old Boys' or 'Old Falconians', and may elect to join the schools' alumni association
Alumni association
An alumni association is an association of graduates or, more broadly, of former students. In the United Kingdom and the United States, alumni of universities, colleges, schools , fraternities, and sororities often form groups with alumni from the same organisation...
, known as the 'Old Falconians’ Union' (OFU). The Union was founded over seventy-five years ago as a way to "promote goodwill fellowship amongst former students of and to provide financial and other support to the School".