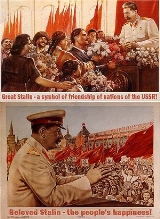 Overview
A cult of personality arises when an individual uses mass media
Mass media
Mass media refers collectively to all media technologies which are intended to reach a large audience via mass communication. Broadcast media transmit their information electronically and comprise of television, film and radio, movies, CDs, DVDs and some other gadgets like cameras or video consoles...
, propaganda
Propaganda
Propaganda is a form of communication that is aimed at influencing the attitude of a community toward some cause or position so as to benefit oneself or one's group....
, or other methods, to create an idealized and heroic public image, often through unquestioning flattery
Flattery
Flattery is the act of giving excessive compliments, generally for the purpose of ingratiating oneself with the subject....
and praise
Praise
Praise is the act of making positive statements about a person, object or idea, either in public or privately. Praise is typically, but not exclusively, earned relative to achievement and accomplishment...
. Cults of personality are usually associated with dictatorship
Dictatorship
A dictatorship is defined as an autocratic form of government in which the government is ruled by an individual, the dictator. It has three possible meanings:...
s. The sociologist Max Weber
Max Weber
Karl Emil Maximilian "Max" Weber was a German sociologist and political economist who profoundly influenced social theory, social research, and the discipline of sociology itself...
developed a tripartite classification of authority
Tripartite classification of authority
Max Weber distinguished three ideal types of legitimate political leadership, domination and authority:# charismatic authority ,# traditional authority and...
; the cult of personality holds parallels with what Weber defined as "charismatic authority
Charismatic authority
The sociologist Max Weber defined charismatic authority as "resting on devotion to the exceptional sanctity, heroism or exemplary character of an individual person, and of the normative patterns or order revealed or ordained by him." Charismatic authority is one of three forms of authority laid out...
". A cult of personality is similar to hero worship
Apotheosis
Apotheosis is the glorification of a subject to divine level. The term has meanings in theology, where it refers to a belief, and in art, where it refers to a genre.In theology, the term apotheosis refers to the idea that an individual has been raised to godlike stature...
, except that it is established by mass media and propaganda.
Throughout history
History
History is the discovery, collection, organization, and presentation of information about past events. History can also mean the period of time after writing was invented. Scholars who write about history are called historians...
, monarchs and heads of state were almost always held in enormous reverence.

Was Friedrich Engels against personality cult? Any quote from him in this regard?
More
x