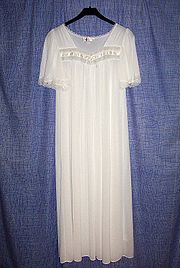 Nightwear, also called "sleepwear", "sleeping suit", "nightclothes", or "nightdress", is clothing
Clothing
Clothing refers to any covering for the human body that is worn. The wearing of clothing is exclusively a human characteristic and is a feature of nearly all human societies...
designed to be worn while sleep
Sleep
Sleep is a naturally recurring state characterized by reduced or absent consciousness, relatively suspended sensory activity, and inactivity of nearly all voluntary muscles. It is distinguished from quiet wakefulness by a decreased ability to react to stimuli, and is more easily reversible than...
ing. The style of nightwear worn may vary with the seasons, with eg. warmer styles being worn in colder conditions. Some styles or materials are selected to be visually appealing or erotic, sometimes in addition to their functional purpose of warmth.

Examples of types of items of nightwear include:


There are several other types of garment that are commonly worn for sleeping – especially clothing otherwise used for physical education, see next section – but these are usually not referred to as nightwear, because they may also be worn during the day and in public. Also, sleeping without any clothing at all is not uncommon.