Encyclopedia
Biologically, a child (plural: children) is generally a human between the stages of birth
Birth
Birth is the act or process of bearing or bringing forth offspring. The offspring is brought forth from the mother. The time of human birth is defined as the time at which the fetus comes out of the mother's womb into the world...
and puberty
Puberty
Puberty is the process of physical changes by which a child's body matures into an adult body capable of reproduction, as initiated by hormonal signals from the brain to the gonads; the ovaries in a girl, the testes in a boy...
. Some vernacular
Vernacular
A vernacular is the native language or native dialect of a specific population, as opposed to a language of wider communication that is not native to the population, such as a national language or lingua franca.- Etymology :The term is not a recent one...
definitions of a child include the fetus
Fetus
A fetus is a developing mammal or other viviparous vertebrate after the embryonic stage and before birth.In humans, the fetal stage of prenatal development starts at the beginning of the 11th week in gestational age, which is the 9th week after fertilization.-Etymology and spelling variations:The...
, as being an unborn child
Unborn child
Unborn child may refer to:*A vernacular or political term for a human in any stage of prenatal development from fertilization to birth* Unborn Child, an album by Seals and Crofts...
. The legal definition of "child" generally refers to a minor
Minor (law)
In law, a minor is a person under a certain age — the age of majority — which legally demarcates childhood from adulthood; the age depends upon jurisdiction and application, but is typically 18...
, otherwise known as a person younger than the age of majority
Age of majority
The age of majority is the threshold of adulthood as it is conceptualized in law. It is the chronological moment when minors cease to legally be considered children and assume control over their persons, actions, and decisions, thereby terminating the legal control and legal responsibilities of...
. "Child" may also describe a relationship with a parent or authority figure, or signify group membership in a clan, tribe, or religion; it can also signify being strongly affected by a specific time, place, or circumstance, as in "a child of nature" or "a child of the Sixties".

The United Nations
United Nations
The United Nations is an international organization whose stated aims are facilitating cooperation in international law, international security, economic development, social progress, human rights, and achievement of world peace...
Convention on the Rights of the Child
Convention on the Rights of the Child
The United Nations Convention on the Rights of the Child is a human rights treaty setting out the civil, political, economic, social, health and cultural rights of children...
defines a child as "a human being below the age of 18 years unless under the law
Law
Law is a system of rules and guidelines which are enforced through social institutions to govern behavior, wherever possible. It shapes politics, economics and society in numerous ways and serves as a social mediator of relations between people. Contract law regulates everything from buying a bus...
applicable to the child, majority
Age of majority
The age of majority is the threshold of adulthood as it is conceptualized in law. It is the chronological moment when minors cease to legally be considered children and assume control over their persons, actions, and decisions, thereby terminating the legal control and legal responsibilities of...
is attained earlier". Ratified by 192 of 194 member countries. Some English definitions of the word 'child' include the fetus
Fetus
A fetus is a developing mammal or other viviparous vertebrate after the embryonic stage and before birth.In humans, the fetal stage of prenatal development starts at the beginning of the 11th week in gestational age, which is the 9th week after fertilization.-Etymology and spelling variations:The...
and the unborn. Biologically, a child is anyone between birth and puberty or in the developmental
Human development (biology)
Human development is the process of growing to maturity. In biological terms, this entails growth from a one-celled zygote to an adult human being.- Biological development:...
stage of childhood
Childhood
Childhood is the age span ranging from birth to adolescence. In developmental psychology, childhood is divided up into the developmental stages of toddlerhood , early childhood , middle childhood , and adolescence .- Age ranges of childhood :The term childhood is non-specific and can imply a...
, between infancy and adulthood. Children generally have fewer rights than adults and are classed as not able to make serious decisions, and legally must always be under the care of a responsible adult.

Recognition of childhood as a state different from adulthood began to emerge in the 16th and 17th centuries. Society began to relate to the child not as a miniature adult but as a person of a lower level of maturity needing adult protection, love and nurturing. This change can be traced in painting: In the Middle Ages
Middle Ages
The Middle Ages is a periodization of European history from the 5th century to the 15th century. The Middle Ages follows the fall of the Western Roman Empire in 476 and precedes the Early Modern Era. It is the middle period of a three-period division of Western history: Classic, Medieval and Modern...
, children were portrayed in art as miniature adults with no childish characteristics. In the 16th century, images of children began to acquire a distinct childish appearance. From the late 17th century onwards, children were shown playing. Toys and literature for children also began to develop at this time. 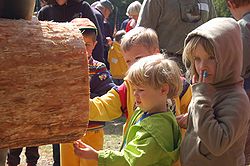 Social attitudes toward children differ around the world in various cultures. These attitudes have changed over time. A 1988 study on European attitudes toward the centrality of children found that Italy was more child-centric and Holland less child-centric, with other countries, such as Austria, Great Britain, Ireland and West Germany
West Germany
West Germany is the common English, but not official, name for the Federal Republic of Germany or FRG in the period between its creation in May 1949 to German reunification on 3 October 1990....
falling in between. 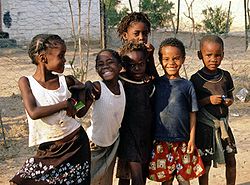 All children go through stages of social development. An infant or very young child will play alone happily. If another child wanders onto the scene, he or she may be physically attacked or pushed out of the way. Next, the child is able to play with another child, gradually learning to share and take turns. Eventually the group grows larger, to three or four children. By the time a child enters kindergarten, he or she is usually able to join in and enjoy group experiences.

Children with ADHD and learning disabilities may need extra help in developing social skills. The impulsive characteristics of an ADHD child may lead to poor peer relationships. Children with poor attention spans may not tune in to social cues in their environment, making it difficult for them to learn social skills through experience.

The age at which children are considered responsible for their society-bound actions (e. g. marriage, voting, etc.) has also changed over time, and this is reflected in the way they are treated in courts of law. In Roman times, children were regarded as not culpable for crimes, a position later adopted by the Church. In the nineteenth century, children younger than seven years old were believed incapable of crime. Children from the age of seven forward were considered responsible for their actions. Therefore, they could face criminal charges, be sent to adult prison, and be punished like adults by whipping, branding or hanging. Today, in many countries like Canada and the United States, children twelve and older are held responsible for their actions and may be sent to special correctional institutions, such as juvenile hall
Youth detention center
A youth detention center, also known as a juvenile detention center , juvenile hall or, more colloquially as juvie, is a secure residential facility for young people, often termed juvenile delinquents, awaiting court hearings and/or placement in long-term care facilities and programs...
.

During the early 1600s in England
England
England is a country that is part of the United Kingdom. It shares land borders with Scotland to the north and Wales to the west; the Irish Sea is to the north west, the Celtic Sea to the south west, with the North Sea to the east and the English Channel to the south separating it from continental...
, life expectancy was only about 35 years, largely because two-thirds of all children died before the age of four. During the Industrial Revolution
Industrial Revolution
The Industrial Revolution was a period from the 18th to the 19th century where major changes in agriculture, manufacturing, mining, transportation, and technology had a profound effect on the social, economic and cultural conditions of the times...
, the life expectancy of children increased dramatically.

According to population health experts, child mortality rates have fallen sharply since the 1990s. Deaths of children under the age of five are
down by 42% in the United States, while Serbia and Malaysia have cut their rates by nearly 70%.


China
People's Republic of China
China , officially the People's Republic of China , is the most populous country in the world, with over 1.3 billion citizens. Located in East Asia, the country covers approximately 9.6 million square kilometres...
's one-child policy
One-child policy
The one-child policy refers to the one-child limitation applying to a minority of families in the population control policy of the People's Republic of China . The Chinese government refers to it under the official translation of family planning policy...
forces some couples to have no more than one child. China's population policy has been credited with a very significant slowing of China's population growth which had been higher before the policy was implemented. It has come under criticism that the implementation of the policy has involved forced abortion
Abortion
Abortion is defined as the termination of pregnancy by the removal or expulsion from the uterus of a fetus or embryo prior to viability. An abortion can occur spontaneously, in which case it is usually called a miscarriage, or it can be purposely induced...
s and forced sterilization. However, while the punishment of "unplanned" pregnancy is a fine, both forced abortion and forced sterilization can be charged with intentional assault, which is punished with up to 10 years' imprisonment. If born with another child and kept, parents must pay a large fine for every day he/she is alive.