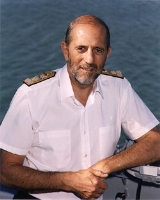 Encyclopedia
Admiral
Admiral (United Kingdom)
Admiral is a senior rank of the Royal Navy of the United Kingdom, which equates to the NATO rank code OF-9, outranked only by the rank Admiral of the Fleet...
Sir Nigel Richard Essenhigh, GCB
Order of the Bath
The Most Honourable Order of the Bath is a British order of chivalry founded by George I on 18 May 1725. The name derives from the elaborate mediæval ceremony for creating a knight, which involved bathing as one of its elements. The knights so created were known as Knights of the Bath...
, ADC
Aide-de-camp
An aide-de-camp is a personal assistant, secretary, or adjutant to a person of high rank, usually a senior military officer or a head of state...
(born 1944) is a British
United Kingdom
The United Kingdom of Great Britain and Northern IrelandIn the United Kingdom and Dependencies, other languages have been officially recognised as legitimate autochthonous languages under the European Charter for Regional or Minority Languages...
admiral who served as First Sea Lord
First Sea Lord
The First Sea Lord is the professional head of the Royal Navy and the whole Naval Service; it was formerly known as First Naval Lord. He also holds the title of Chief of Naval Staff, and is known by the abbreviations 1SL/CNS...
of the Royal Navy
Royal Navy
The Royal Navy is the naval warfare service branch of the British Armed Forces. Founded in the 16th century, it is the oldest service branch and is known as the Senior Service...
from 2001 to 2002.

Essenhigh was born in Newcastle
Newcastle upon Tyne
Newcastle upon Tyne is a city and metropolitan borough of Tyne and Wear, in North East England. Historically a part of Northumberland, it is situated on the north bank of the River Tyne...
and attended St. Cuthbert's School. He joined the Royal Navy
Royal Navy
The Royal Navy is the naval warfare service branch of the British Armed Forces. Founded in the 16th century, it is the oldest service branch and is known as the Senior Service...
in 1963 and qualified as a Principal Warfare Officer in 1972, specialising in navigation
Navigation
Navigation is the process of monitoring and controlling the movement of a craft or vehicle from one place to another. It is also the term of art used for the specialized knowledge used by navigators to perform navigation tasks...
.

After his promotion to commander
Commander
Commander is a naval rank which is also sometimes used as a military title depending on the individual customs of a given military service. Commander is also used as a rank or title in some organizations outside of the armed forces, particularly in police and law enforcement.-Commander as a naval...
in 1980 he joined the Ministry of Defence
Ministry of Defence (United Kingdom)
The Ministry of Defence is the United Kingdom government department responsible for implementation of government defence policy and is the headquarters of the British Armed Forces....
for duty with Naval Manpower Training and took command of the Type 42 destroyer HMS Nottingham
HMS Nottingham (D91)
HMS Nottingham was a batch two Type 42 destroyer of the Royal Navy, named after the city of Nottingham, England. She was launched on 18 February 1980, and commissioned on 8 April 1983 as the sixth ship to bear the name....
in 1982. His next post was on board HMS Ark Royal
HMS Ark Royal (R07)
HMS Ark Royal is a decommissioned light aircraft carrier and former flagship of the Royal Navy. She was the third and final vessel of Invincible-class...
during its construction in 1984 and he was promoted to captain
Captain (Royal Navy)
Captain is a senior officer rank of the Royal Navy. It ranks above Commander and below Commodore and has a NATO ranking code of OF-5. The rank is equivalent to a Colonel in the British Army or Royal Marines and to a Group Captain in the Royal Air Force. The rank of Group Captain is based on the...
in 1985.

Promotion to rear admiral
Rear Admiral
Rear admiral is a naval commissioned officer rank above that of a commodore and captain, and below that of a vice admiral. It is generally regarded as the lowest of the "admiral" ranks, which are also sometimes referred to as "flag officers" or "flag ranks"...
came in 1994 when he took up the position of Hydrographer of the Navy
Hydrographer of the Navy
Hydrographer of the Navy is a Royal Naval appointment. From 1795 until 2001 the post was responsible for the production of charts for the Royal Navy, and around this post grew the United Kingdom Hydrographic Office...
and he became Assistant Chief of Defence Staff (Programmes) in 1996. Two years later he was promoted to full admiral and was appointed to the job of Commander-in-Chief Fleet
Commander-in-Chief Fleet
Commander-in-Chief Fleet is the admiral responsible for the operation, resourcing and training of the ships, submarines and aircraft, and personnel, of the British Royal Navy...
. In 2001 he became First Sea Lord
First Sea Lord
The First Sea Lord is the professional head of the Royal Navy and the whole Naval Service; it was formerly known as First Naval Lord. He also holds the title of Chief of Naval Staff, and is known by the abbreviations 1SL/CNS...
.

In retirement he has taken up an appointment as a Non-Executive Director of Babcock International. He is a Patron of Journey South 2007, an expedition to the South Pole
South Pole
The South Pole, also known as the Geographic South Pole or Terrestrial South Pole, is one of the two points where the Earth's axis of rotation intersects its surface. It is the southernmost point on the surface of the Earth and lies on the opposite side of the Earth from the North Pole...
.

On 18 January 2010 Northrop Grumman
Northrop Grumman
Northrop Grumman Corporation is an American global aerospace and defense technology company formed by the 1994 purchase of Grumman by Northrop. The company was the fourth-largest defense contractor in the world as of 2010, and the largest builder of naval vessels. Northrop Grumman employs over...
announced the appointment of Essenhigh as chief executive of its Information Systems Europe business. In this new position, he will focus on the strategic direction of Northrop Grumman's activities in the defence and civil IT, C4ISTAR
C4ISTAR
In military usage, a number of abbreviations in the format C followed by additional letters are used, based on expanded versions of the abbreviation C2 - command and control.C2I stands for command, control, and intelligence....
and counter-IED
Improvised explosive device
An improvised explosive device , also known as a roadside bomb, is a homemade bomb constructed and deployed in ways other than in conventional military action...
markets in the UK, mainland Europe and its export markets. He will continue in his role as Non-Executive Chairman for Northrop Grumman in the UK, and has been the Non-Executive Director for Northrop Grumman UK since 2008.
The source of this article is wikipedia, the free encyclopedia.  The text of this article is licensed under the GFDL.