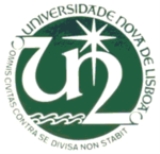 Encyclopedia
Universidade NOVA de Lisboa, univɨsiˈdad(ɨ) ˈnɔvɐ dɨ liʒˈboɐ, also known as NOVA ) was established in 1973 and is the youngest of the three public universities
Public university
A public university is a university that is predominantly funded by public means through a national or subnational government, as opposed to private universities. A national university may or may not be considered a public university, depending on regions...
of Lisbon
Lisbon
Lisbon is the capital city and largest city of Portugal with a population of 545,245 within its administrative limits on a land area of . The urban area of Lisbon extends beyond the administrative city limits with a population of 3 million on an area of , making it the 9th most populous urban...
, in Portugal
Portugal
Portugal , officially the Portuguese Republic is a country situated in southwestern Europe on the Iberian Peninsula. Portugal is the westernmost country of Europe, and is bordered by the Atlantic Ocean to the West and South and by Spain to the North and East. The Atlantic archipelagos of the...
.

Since 2006, the THE-QS World University Rankings has ranked Universidade NOVA de Lisboa as one of the world's 500 best universities. The university is especially strong in the fields of Business, Economics and Law, being ranked number 245 in the world in 2008, as well as in the Arts and Humanities fields. 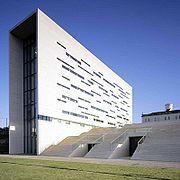 During its first years, the University offered mainly graduate and specialist programs. Since the end of 1977, when the first regular programs started, the university has been expanding steadily.

The University, as well as its Units, enjoys scientific, academic and administrative autonomy and, as a state institution, is mainly funded by Ministry of Higher Education and Science.

In 2005 the University had about 14,000 students, including 12,000 undergraduate and 2,000 graduate; about 57% are women and 4% are foreign students. It offers 32 undergraduate programs and 57 graduate programs.
The University is not confined to one single campus. Its five faculties and four University Institutes are located in various sites in and outside Lisbon. The buildings for the Faculty of Human and Social Sciences, Faculty of Medical Sciences, Faculty of Economics, Faculty of Law, Institute for Statistics and Information Management, Institute of Hygiene and Tropical Medicine, School of Public Health and the Rectory, are located in several places in the city of Lisbon.

Whereas, the Faculty of Sciences and Technology is located in a large campus a few kilometers away from Lisbon on the south side of the Tagus
Tagus
The Tagus is the longest river on the Iberian Peninsula. It is long, in Spain, along the border between Portugal and Spain and in Portugal, where it empties into the Atlantic Ocean at Lisbon. It drains an area of . The Tagus is highly utilized for most of its course...
river at Monte de Caparica and the Institute for Chemical and Biological Technology is also only a few miles away from the capital at Oeiras.

The Welfare Students Services are located near the Rectory and supervise financial aid to the students, four faculty canteens and four university residences.

Rector: presides over the University and represents it in its external relations. Chairs the representative boards and is assisted by the Vice-Rectors and Pro-Rectors.

Senate: the most important central decision making body in academic self government. Includes representatives of academic units, of personnel groups and students. There are 50 members.

People who have been awarded a degree by the New University of Lisbon or otherwise have attended or lectured in this university, include: