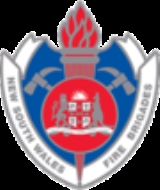 Encyclopedia
Fire and Rescue NSW, an agency
Government agency
A government or state agency is a permanent or semi-permanent organization in the machinery of government that is responsible for the oversight and administration of specific functions, such as an intelligence agency. There is a notable variety of agency types...
of the Government of New South Wales
Government of New South Wales
The form of the Government of New South Wales is prescribed in its Constitution, which dates from 1856, although it has been amended many times since then...
, Australia
Australia
Australia , officially the Commonwealth of Australia, is a country in the Southern Hemisphere comprising the mainland of the Australian continent, the island of Tasmania, and numerous smaller islands in the Indian and Pacific Oceans. It is the world's sixth-largest country by total area...
, is responsible for firefighting, rescue
Rescue
Rescue refers to responsive operations that usually involve the saving of life, or prevention of injury during an incident or dangerous situation....
and hazmat services in the major cities, metropolitan areas and towns across rural and regional New South Wales
New South Wales
New South Wales is a state of :Australia, located in the east of the country. It is bordered by Queensland, Victoria and South Australia to the north, south and west respectively. To the east, the state is bordered by the Tasman Sea, which forms part of the Pacific Ocean. New South Wales...
. Fire and Rescue NSW is the seventh largest urban fire service in the world, with more than 6,900 firefighters serving at 339 fire stations throughout the state, 418 support staff, and 6,000 community fire unit volunteers. It also works closely with the Rural Fire Service
New South Wales Rural Fire Service
The New South Wales Rural Fire Service is a volunteer-based firefighting agency and statutory body of the NSW Government. The NSW RFS is responsible for the general administration of rural fire management affairs including administration of the Rural Fire Fighting Fund, co-ordination with local...
.

The agency operates pursuant to powers set out in the and was initially formed in 1910 as the New South Wales Fire Brigades, with its origins going back to 1884 as the Metropolitan Fire Brigade.

The New South Wales Fire Brigades (NSWFB) was established in September 1909, replacing the Sydney based Metropolitan Fire Brigade, which formed in February 1884. Prior to its formation, Fire Brigade Boards also ran rudimentary fire services in various New South Wales country towns. On 1 January 2011 the agency was re-named to Fire and Rescue NSW to better reflect the agency's expanding responsibilities.

The Fire and Rescue NSW emblem includes the NSW state emblem with the State motto Orta Recens Quam Pura Nites, which is Latin for 'Newly Risen How Brightly We Shine'.

A flag
Flag
A flag is a piece of fabric with a distinctive design that is usually rectangular and used as a symbol, as a signaling device, or decoration. The term flag is also used to refer to the graphic design employed by a flag, or to its depiction in another medium.The first flags were used to assist...
based on the British
United Kingdom
The United Kingdom of Great Britain and Northern IrelandIn the United Kingdom and Dependencies, other languages have been officially recognised as legitimate autochthonous languages under the European Charter for Regional or Minority Languages...
Blue Ensign
Blue Ensign
The Blue Ensign is a flag, one of several British ensigns, used by certain organisations or territories associated with the United Kingdom. It is used either plain, or defaced with a badge or other emblem....
with FRNSW emblem is also used.

Greg Mullins was appointed Commissioner of the NSW Fire Brigades (now Fire & Rescue NSW) on 4 July 2003. He is the first person in the history of the brigade to be appointed as both Chief Fire Officer / CEO, and to have come from the Brigades’ ranks. Commissioner Mullins joined the then NSWFB in 1978 after serving for six years as a volunteer firefighter with the NSW Rural Fire Service. He rose steadily through the ranks serving in operational and specialist positions, becoming a Station Officer in 1990, a District Officer (Inspector) in 1992, a Superintendent in 1995, and an Assistant Commissioner in 1996. In 2000 he was appointed as Director State Operations. A former Churchill Fellow, he has represented Australian fire services nationally and internationally on issues concerning emergency management, managing the consequences of terrorist attacks, and urban search and rescue.

Some stations employ a mixture of Permanent and Retained Firefighters. This arrangement is common in larger country towns such as Bathurst and Orange where the nearest backup would otherwise be some distance away. The station would typically have one appliance manned by permanent staff as first response, with additional vehicles being manned by retained staff as required. The station may have Permanent day and night shifts or be day shift only, with retained staff manning all appliances at night when they are less hampered by work or other commitments.

Community fire unit
Community fire unit
Community Fire Units are volunteer teams of residents who are trained as preliminary responders to bushfires until the fire brigade arrives and in bushfire prevention...
s (CFUs) are volunteer teams of local residents trained to safeguard their homes during a bushfire, until the fire brigades can get there, or to 'mop up' after a fire has passed so fire units can be released to attend more urgent incidents. CFU members are not firefighters. The aim of the CFU program is to reduce the impact of bushfires on the community and to protect life and property from bushfires. A typical team is made up of six to 12 members. Recruitment is within the local community. Local fire stations conduct regular training sessions with volunteers. The training focus is on bushfire education, prevention and preparation.

Fire and Rescue NSW conduct a variety of rescue operations state wide, ranging from the release of persons from transport, domestic and industrial incidents to animal rescues. In addition there are specially trained teams that carry out swift water, alpine and vertical rescues and Urban Search and Rescue (USAR). FRNSW Rescue also works in conjunction with other government agencies including the NSW Police Force, Ambulance Service of NSW
Ambulance Service of New South Wales
The Ambulance Service of New South Wales , an agency of the Department of Health of the New South Wales Government, is the main provider of pre-hospital emergency care and ambulance services in the state of New South Wales, Australia....
, the New South Wales Rural Fire Service and the State Emergency Service
New South Wales State Emergency Service
The New South Wales State Emergency Service is an emergency and rescue service dedicated to assisting the community. It is made up almost entirely of volunteers, with 228 units located throughout New South Wales. The units are composed of some 10,000 volunteer members, who are easily identified by...
. The FRNSW Urban Search and Rescue
Urban search and rescue
Urban search and rescue involves the location, extrication, and initial medical stabilization of victims trapped in confined spaces due to natural disasters, structural collapse, transportation accidents, mines and collapsed trenches.USAR teams in different countries may be organised in a...
Taskforce has been registered by the United Nations for international deployment to assist in disaster situations, particularly earthquakes,throughout the Asia-Pacific region.


Fire and Rescue NSW is responsible for protecting the whole of New South Wales from hazardous materials (hazmat) incidents. The agency has the authority to attend, combat and render safe any land-based or inland waterway spillage of hazardous materials within the State. All fire stations are equipped with trained personnel and resources for dealing with hazmat incidents. Each fire station receives hazardous materials awareness training and equipment to combat minor spills of hydrocarbons, gas leaks and emergency decontamination procedures. Fire and Rescue NSW has six specialist heavy Hazardous Materials Response Units operating from Sydney (Greenacre, Alexandria & St Marys), Newcastle, Berkley Vale and Shellharbour. They have advanced capabilities in detection of toxic industrial chemicals, volatile substances and chemical warfare agents. Intermediate hazardous materials response is delivered by 14 strategically located units, including six with a waterways response capability. Each unit is equipped with detection equipment and has the capability to access chemical databases with information on chemical, biological, radiological and toxic industrial chemical substances.


Fire and Rescue NSW supports the Rural Fire Service of NSW during and after bushfires in New South Wales.

Fire and Rescue NSW jointly funds and operates a BK 117 helicopter
Helicopter
A helicopter is a type of rotorcraft in which lift and thrust are supplied by one or more engine-driven rotors. This allows the helicopter to take off and land vertically, to hover, and to fly forwards, backwards, and laterally...
in partnership with the NSW Police Aviation Support Branch. The helicopter's primary role is response during the crisis and consequence management phases of a terrorist event. It also provides general air transport of both equipment and personnel for complex and/or protracted hazardous materials or rescue incidents and firefighting operations.

FRNSW’ Fire Investigation and Research Unit (FIRU) provides a range of investigative and research services to both internal and external customers including research into human and structural behaviour during fire, and the associated impacts for performance based building design. The Fire Investigation and Research Unit assists with determining fire causes and liaises closely with Police and other investigators. 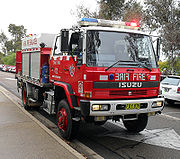 All FRNSW appliances (fire engines) are custom designed. The specialised equipment to be carried on appliances is drawn from a standardised listing which forms a managed inventory and is specific to each appliance type and model. Standardisation of inventory is extremely important as this ensures equipment is stowed in an approved and ergonomic manner. It is also ensures the appliance is not overloaded and is within its legal load carrying capacity.

FRNSW has a total of 110 4x4 water tanker appliances:

FRNSW has a total of 408 pumping appliances:

In 2008 the then NSWFB changed the way it designated its pumping appliances. Prior to the change, there were:
Any type of appliance could be further specialised with rescue or hazmat equipment.

Due to the differences between several types being only minor, and the 4x2 Type 1 being withdrawn and rebuilt as rescue appliances, the system was simplified into 3 basic classes:

FRNSW has a total of 25 aerial appliances: 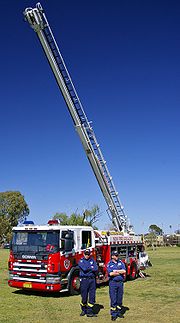 FRNSW has a total of 32 HazMat appliances

FRNSW has a total of 38 rescue appliances: