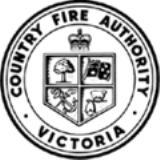 
Country Fire Authority, or CFA, is the name of the fire service that provides firefighting and other emergency services to all of the country areas and regional townships within the state of Victoria
Victoria (Australia)
Victoria is the second most populous state in Australia. Geographically the smallest mainland state, Victoria is bordered by New South Wales, South Australia, and Tasmania on Boundary Islet to the north, west and south respectively....
, Australia
Australia
Australia , officially the Commonwealth of Australia, is a country in the Southern Hemisphere comprising the mainland of the Australian continent, the island of Tasmania, and numerous smaller islands in the Indian and Pacific Oceans. It is the world's sixth-largest country by total area...
, as well as large portions of the outer suburban areas and growth corridors of Melbourne
Melbourne
Melbourne is the capital and most populous city in the state of Victoria, and the second most populous city in Australia. The Melbourne City Centre is the hub of the greater metropolitan area and the Census statistical division—of which "Melbourne" is the common name. As of June 2009, the greater...
not covered by the Metropolitan Fire Brigade
Metropolitan Fire Brigade (Melbourne)
The Metropolitan Fire Brigade , also known as the Metropolitan Fire and Emergency Services Board, provides firefighting, rescue, and hazardous material incident response services to the metropolitan area of Melbourne, Victoria, Australia...
. In the event of an emergency in Australia, emergency services including the CFA can be called by dialling 000.

The current Chairman of CFA is Kerry Murphy. Its Chief Executive Officer is Mick Bourke, and its operational Chief Officer
Chief officer
A chief officer can refer to any of various leaders:In the military, it can refer to certain non-commissioned members:*Chief Petty Officer*Chief Warrant OfficerMarine occupation:*Chief Mate...
of CFA is Euan Ferguson.

CFA operates under the Country Fire Authority Act of 1958, its amendments and Regulations. This legislation was brought about by significant bushfires during the period 1939-1944 which killed 114 people and destroyed nearly 1400 homes while also damaging large areas of the state and destroying significant amounts of stock. Subsequent investigations showed the lack of a cohesive firefighting agency outside the central metropolitan area and CFA was born on 2 April 1945. Many of its brigades however were established in the 19th century or early in the 20th century.

CFA is one of the world's largest volunteer based firefighting organisations. It services more than 150,000 square kilometres and 3.3 million people, and currently has approximately 59,000 active volunteers with over 550 career firefighters and about 1,100 career support staff.

The CFA is funded on a 77.5%/22.5% split where Insurance
Insurance
In law and economics, insurance is a form of risk management primarily used to hedge against the risk of a contingent, uncertain loss. Insurance is defined as the equitable transfer of the risk of a loss, from one entity to another, in exchange for payment. An insurer is a company selling the...
companies provide 77.5% of the funding through fire levies on insurance policies and the Victorian Government
Government of Victoria
The Government of Victoria, under the Constitution of Australia, ceded certain legislative and judicial powers to the Commonwealth, but retained complete independence in all other areas...
provides 22.5% of the funding. In 2006/2007 Insurance companies provided $180.8m and $51.1m was provided from the State Government.
The CFA also receives small amounts of funding from the provision of goods and services to external bodies. Additional funding from the government is also provided during serious long duration bushfires.

Individual brigades receive further funds from local councils, from their own fundraising activities and from donations from the community.

There are 1209 brigades (1023 rural, 252 urban and some just brigades), with more than 2300 vehicles across 20 Districts in eight Regions. The Brigades are split up into Regions, Districts then Groups with each division having less brigades in each, however in Urban locations the Region may be the same as the District.
There are Eight "Regions", Twenty "Districts" and many Groups. All brigades are in a District and a Region, but may not fall into a group.
The CFA's Regions are:

The CFA owned vehicles consist of nearly 1300 Tankers, 250 Pumpers, 7 Aerial Appliances (telescopic ladders), 30 Rescue Units and various other special purpose and Command and Support vehicles. This fleet is supplemented by more than 1,400 brigade owned vehicles. Brigade owned vehicles are bought and paid for by the individual brigades and communities (sometimes with the assistance of Victorian Government grants) to allow extension of brigade firefighting capability. There are a total of over 4000 vehicles in operation.

Most CFA firefighters are issued an EAS (Emergency Alerting System) Pager
Pager
A pager is a simple personal telecommunications device for short messages. A one-way numeric pager can only receive a message consisting of a few digits, typically a phone number that the user is then requested to call...
These pagers allow Emergency
Emergency
An emergency is a situation that poses an immediate risk to health, life, property or environment. Most emergencies require urgent intervention to prevent a worsening of the situation, although in some situations, mitigation may not be possible and agencies may only be able to offer palliative...
, Non-Emergency and Administration messages to be sent to members either individually or by groups of people.
Brigades are dispatched based on various factors including the time of day, location and type of fire or incident. Although each fire brigade has a primary response zone, other neighboring brigades or specific appliances may be responded as support to the primary brigade. This is especially the case where specialist skills or equipment are needed, such as for road accident rescue or very large structural fires.

When the emergency dispatcher is notified of a fire or incident, he or she sends an Emergency-type message to volunteers or CFA career firefighters via EAS Pager. When this is received by the brigade members, firefighters respond to their station and from there will "turn out" firefighting appliances. While these calls usually come from VicFire (CFA dispatch) as a result of a call to 000, brigades or appliances may also be responded by other dispatch agencies such as D24 (Victoria Police dispatch) or at the request of incident controllers. Other emergency service providers such as Ambulance Victoria and the Victorian State Emergency Service may also request that CFA brigades be responded to an incident.

All members are required to undertake Wildfire
Wildfire
A wildfire is any uncontrolled fire in combustible vegetation that occurs in the countryside or a wilderness area. Other names such as brush fire, bushfire, forest fire, desert fire, grass fire, hill fire, squirrel fire, vegetation fire, veldfire, and wilkjjofire may be used to describe the same...
"Minimum Skills" training before turning out in a fire truck. This consists of five basic training modules including:

The CFA has been involved in a number of major fires over the years where lives have been lost, including:


The CFA has also been involved in combatting interstate fires such as the Sydney
Sydney
Sydney is the most populous city in Australia and the state capital of New South Wales. Sydney is located on Australia's south-east coast of the Tasman Sea. As of June 2010, the greater metropolitan area had an approximate population of 4.6 million people...
fires in 2002 and the 2003 Canberra bushfires
2003 Canberra bushfires
The Canberra bushfires of 2003 caused severe damage to the outskirts of Canberra, the Australian capital city. Almost 70% of the Australian Capital Territory’s pasture, forests and nature parks were severely damaged, and most of the renowned Mount Stromlo Observatory was destroyed...
.

The CFA is involved in other non-firefighting operations. The CFA has a leading role in Prevention, Preparedness, Response and Recovery of Fires and other Incidents.
The CFA is responsible for all fires on Private land in Victoria outside of the Metropolitan Fire Brigade area including Structure Fires and Bushfires. The CFA has a shared responsibility for Rescues with the Victorian State Emergency Service
State Emergency Service
A State Emergency Service is an Australian volunteer organisation that provides emergency help during and after declared disasters. The SES is also the primary or secondary agency for emergencies, such as storm damage,flood damage, building damage, traffic hazards and road crash rescue...
. In addition to its Response activities members also run prevention programs such as Fire Ready Victoria and Brigades in Schools. 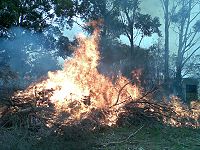 The CFA is also responsible for specialist response functions, including -

The VFBV is also responsible for running the Urban and Rural (respectively) State Championships held each year. These competitions involve brigades from around the state competing in a range of events which are based on current and past fire fighting practices.

The official Rose of the CFA is the "firestar" which was introduced in 2010. The rose will be sold by the individual brigades to raise funds and is named after the distinctive shape of the volunteer fire fighter badge.