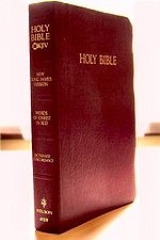 Encyclopedia
The New King James Version (NKJV) is a modern translation of the Bible
Bible
The Bible refers to any one of the collections of the primary religious texts of Judaism and Christianity. There is no common version of the Bible, as the individual books , their contents and their order vary among denominations...
published by Thomas Nelson, Inc. The New Testament
New Testament
The New Testament is the second major division of the Christian biblical canon, the first such division being the much longer Old Testament....
was published in 1979. The Psalms
Psalms
The Book of Psalms , commonly referred to simply as Psalms, is a book of the Hebrew Bible and the Christian Bible...
in 1980. The full Bible was published in 1982. It took a total of 7 years to complete. The anglicized edition was originally known as the Revised Authorized Version, but the NKJV title is now used universally.

The NKJV translation project was conceived by Arthur Farstad. It was inaugurated in 1975 with two meetings (Nashville
Nashville, Tennessee
Nashville is the capital of the U.S. state of Tennessee and the county seat of Davidson County. It is located on the Cumberland River in Davidson County, in the north-central part of the state. The city is a center for the health care, publishing, banking and transportation industries, and is home...
and Chicago
Chicago
Chicago is the largest city in the US state of Illinois. With nearly 2.7 million residents, it is the most populous city in the Midwestern United States and the third most populous in the US, after New York City and Los Angeles...
) of 130 biblical scholars, pastors, and theologians. The men who were invited prepared the guidelines for the NKJV.

The aim of its translators was to update the vocabulary and grammar of the King James Version, while preserving the classic style and literary beauty of the original 1611 KJV version. The 130 translators believed in unyielding faithfulness to the original Greek, Aramaic, and Hebrew texts including the Dead Sea Scrolls. Also agreed upon for most New King James Bibles was, easier event descriptions, history of each book, and added dictionary and updated concordance.

According to the preface of the New King James Version (p. v-vi), the NKJV uses the 1967/1977 Stuttgart edition of the Biblia Hebraica
Biblia Hebraica
Biblia Hebraica is a Latin phrase meaning Hebrew Bible. It is traditionally used as a title for printed editions of the Tanakh ....
for the Old Testament, with frequent comparisons made to the Ben Hayyim edition of the Mikraot Gedolot published by Bomberg
Daniel Bomberg
Daniel Bomberg was an early printer of Hebrew language books. A Christian, born in Antwerp, he was primarily active in Venice between 1516 and 1549....
in 1524–25, which was used for the King James Version. Both the Old Testament text of the NKJV and that of the KJV come from the ben Asher text (known as the Masoretic Text
Masoretic Text
The Masoretic Text is the authoritative Hebrew text of the Jewish Bible and is regarded as Judaism's official version of the Tanakh. While the Masoretic Text defines the books of the Jewish canon, it also defines the precise letter-text of these biblical books, with their vocalization and...
). However, the 1967/1977 Stuttgart edition of the Biblia Hebraica used by the NKJV uses an earlier manuscript (the Leningrad Manuscript B19a) than that of the KJV.

The translators have sought to follow the principles of translation used in the original King James Version, which the NKJV revisers call "complete equivalence" in contrast to "dynamic equivalence" used by many other modern translations. The task of updating the English of the KJV involved significant changes in word order, grammar, vocabulary, and spelling. One of the most significant features of the NKJV was its abandonment of the historic second person pronouns “thou”, "thee", “ye”, “thy”, and “thine”. Verb forms were also modernized in the NKJV (for example, "speaks" rather than "speaketh").

The Executive Editor of the NKJV, Arthur L. Farstad, addressed textual concerns in a book explaining the NKJV translation philosophy. While defending the Majority Text (also called the Byzantine text-type
Byzantine text-type
The Byzantine text-type is one of several text-types used in textual criticism to describe the textual character of Greek New Testament manuscripts. It is the form found in the largest number of surviving manuscripts, though not in the oldest...
), and admitting that the Textus Receptus
Textus Receptus
Textus Receptus is the name subsequently given to the succession of printed Greek texts of the New Testament which constituted the translation base for the original German Luther Bible, the translation of the New Testament into English by William Tyndale, the King James Version, and for most other...
is inferior to the Majority Text, he noted (p. 114) that the NKJV references significant discrepancies among text types in its marginal notes: "None of the three [textual] traditions on every page of the New Testament ... is labeled 'best' or 'most reliable.' The reader is permitted to make up his or her own mind about the correct reading."

An unabridged audio version (Audiobook) called "The Word of Promise Audio Bible" has been produced by the publisher. It is narrated by well-known celebrities and fully dramatized with music and sound effects