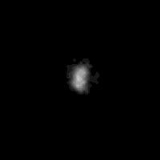 Encyclopedia
Nereid also known as Neptune II, is the third-largest moon
Natural satellite
A natural satellite or moon is a celestial body that orbits a planet or smaller body, which is called its primary. The two terms are used synonymously for non-artificial satellites of planets, of dwarf planets, and of minor planets....
of Neptune
Neptune
Neptune is the eighth and farthest planet from the Sun in the Solar System. Named for the Roman god of the sea, it is the fourth-largest planet by diameter and the third largest by mass. Neptune is 17 times the mass of Earth and is slightly more massive than its near-twin Uranus, which is 15 times...
. It has a highly eccentric orbit. Nereid was discovered by Gerard Kuiper
Gerard Kuiper
Gerard Peter Kuiper , Netherlands – December 24, 1973, Mexico City) was a Dutch-American astronomer after whom the Kuiper belt was named.-Early life:...
in 1949 and was the second moon of Neptune to be discovered.

Nereid was discovered on May 1, 1949, by Gerard P. Kuiper, on photographic plates taken with the 82-inch telescope at the McDonald Observatory
McDonald Observatory
The McDonald Observatory is an astronomical observatory located near the unincorporated community of Fort Davis in Jeff Davis County, Texas, United States. The facility is located on Mount Fowlkes and Mount Locke in the Davis Mountains of West Texas...
. He proposed the name in the report of his discovery. It is named after the Nereids, sea-nymphs of Greek mythology
Greek mythology
Greek mythology is the body of myths and legends belonging to the ancient Greeks, concerning their gods and heroes, the nature of the world, and the origins and significance of their own cult and ritual practices. They were a part of religion in ancient Greece...
and attendants of the god Neptune
Neptune (mythology)
Neptune was the god of water and the sea in Roman mythology and religion. He is analogous with, but not identical to, the Greek god Poseidon. In the Greek-influenced tradition, Neptune was the brother of Jupiter and Pluto, each of them presiding over one of the three realms of the universe,...
. It was the second and last moon of Neptune to be discovered before the arrival of Voyager 2
Voyager 2
The Voyager 2 spacecraft is a 722-kilogram space probe launched by NASA on August 20, 1977 to study the outer Solar System and eventually interstellar space...
(not counting a single observation of an occultation by Larissa
Larissa (moon)
Larissa , also known as Neptune VII, is the fifth-closest inner satellite of Neptune. It is named after Larissa, a lover of Poseidon in Greek mythology and eponymous nymph of the city in Thessaly.- Discovery :...
in 1981).

Nereid orbit
Orbit
In physics, an orbit is the gravitationally curved path of an object around a point in space, for example the orbit of a planet around the center of a star system, such as the Solar System...
s Neptune
Neptune
Neptune is the eighth and farthest planet from the Sun in the Solar System. Named for the Roman god of the sea, it is the fourth-largest planet by diameter and the third largest by mass. Neptune is 17 times the mass of Earth and is slightly more massive than its near-twin Uranus, which is 15 times...
in the prograde
Prograde
Prograde can refer to:*Prograde or direct motion, in astronomy, a type of motion of astronomical bodies* Prograde metamorphism, in geology, describes mineral changes in rocks under increasing pressure and/or temperature conditions...
direction at an average distance of 5513400 km (3,425,876.4 mi), but its high eccentricity of 0.7507 takes it as close as 1372000 km (852,523.4 mi) and as far as 9655000 km (5,999,353.8 mi) from the planet.

The unusual orbit suggests that it may be either a captured asteroid
Asteroid
Asteroids are a class of small Solar System bodies in orbit around the Sun. They have also been called planetoids, especially the larger ones...
or Kuiper belt
Kuiper belt
The Kuiper belt , sometimes called the Edgeworth–Kuiper belt, is a region of the Solar System beyond the planets extending from the orbit of Neptune to approximately 50 AU from the Sun. It is similar to the asteroid belt, although it is far larger—20 times as wide and 20 to 200 times as massive...
object, or that it was an inner moon in the past and was perturbed during the capture of Neptune's largest moon Triton
Triton (moon)
Triton is the largest moon of the planet Neptune, discovered on October 10, 1846, by English astronomer William Lassell. It is the only large moon in the Solar System with a retrograde orbit, which is an orbit in the opposite direction to its planet's rotation. At 2,700 km in diameter, it is...
.

Nereid is Neptune's third-largest satellite and has an average radius of about 170 kilometres (105.6 mi). It is rather large for an irregular satellite. The shape of Nereid is not known.

Since 1987 some photometric observations of Nereid have detected large (by ~1 of magnitude) variations of it brightness, which can happen over years and months, but sometimes even over a few days. They persist even after a correction for distance and phase effects. On the other hand, not all astronomers who have observed Nereid have noticed such variations. This means that they may be quite chaotic. As of 2010 there is no credible explanation of the variations, but, if they exist, they are definitely related to the rotation of Nereid. This moon due to its highly elliptical orbit can be either in the state of forced precession
Precession
Precession is a change in the orientation of the rotation axis of a rotating body. It can be defined as a change in direction of the rotation axis in which the second Euler angle is constant...
or even chaotic rotation (like Hyperion
Hyperion (moon)
Hyperion , also known as Saturn VII, is a moon of Saturn discovered by William Cranch Bond, George Phillips Bond and William Lassell in 1848. It is distinguished by its irregular shape, its chaotic rotation, and its unexplained sponge-like appearance...
). In any case its rotation should be rather irregular.

Spectrally
Spectrum
A spectrum is a condition that is not limited to a specific set of values but can vary infinitely within a continuum. The word saw its first scientific use within the field of optics to describe the rainbow of colors in visible light when separated using a prism; it has since been applied by...
Nereid appears neutral in colour and water ice
Water ice
Water ice could refer to:# Ice formed by water # Italian ice, fruit flavoured deserts, sorbet# Ice made from flowing water in Ice climbing...
has been detected on its surface. Its spectrum appears to be intermediate between Uranus
Uranus
Uranus is the seventh planet from the Sun. It has the third-largest planetary radius and fourth-largest planetary mass in the Solar System. It is named after the ancient Greek deity of the sky Uranus , the father of Cronus and grandfather of Zeus...
's moons Titania
Titania (moon)
Titania is the largest of the moons of Uranus and the eighth largest moon in the Solar System at a diameter of 1578 km. Discovered by William Herschel in 1787, Titania is named after the queen of the fairies in Shakespeare's A Midsummer Night's Dream...
and Umbriel
Umbriel (moon)
Umbriel is a moon of Uranus discovered on October 24, 1851, by William Lassell. It was discovered at the same time as Ariel and named after a character in Alexander Pope's poem The Rape of the Lock. Umbriel consists mainly of ice with a substantial fraction of rock, and may be differentiated into a...
, which suggests that Nereid's surface is composed of a mixture of water ice and some spectrally neutral material. The spectrum is markedly different from the outer-Solar-System minor planet
Minor planet
An asteroid group or minor-planet group is a population of minor planets that have a share broadly similar orbits. Members are generally unrelated to each other, unlike in an asteroid family, which often results from the break-up of a single asteroid...
s, centaurs Pholus
5145 Pholus
5145 Pholus is a centaur in an eccentric orbit, with a perihelion less than Saturn's and aphelion greater than Neptune's. Pholus has not come within one astronomical unit of a planet since 764 BC, and will not until 5290. It is believed that Pholus originated as a Kuiper belt object.It was...
, Chiron
2060 Chiron
2060 Chiron is a minor planet in the outer Solar System. Discovered in 1977 by Charles T. Kowal , it was the first-known member of a new class of objects now known as centaurs, with an orbit between Saturn and Uranus.Although it was initially classified as an asteroid, it was later found to...
and Chariklo
10199 Chariklo
10199 Chariklo is the largest known centaur. It orbits the Sun between Saturn and Uranus, grazing Uranus.Chariklo was discovered by James V. Scotti of the Spacewatch program on February 15, 1997. Chariklo is named after the nymph Chariclo , the wife of Chiron and the daughter of Apollo.A...
, suggesting that Nereid formed around Neptune rather than being a captured body.

Halimede, which has similar colors, may be a fragment of Nereid that was broken off during a collision.

The only spacecraft to visit Nereid is Voyager 2
Voyager 2
The Voyager 2 spacecraft is a 722-kilogram space probe launched by NASA on August 20, 1977 to study the outer Solar System and eventually interstellar space...
, which passed Nereid at a distance of 4700000 km (2,920,451.9 mi) between April 20 and August 19, 1989. Voyager 2 obtained 83 images of the moon with observation accuracies of 70 km (43.5 mi) to 800 km (497.1 mi). Prior to Voyager 2's arrival, observations of Nereid had been limited to ground-based observations that could only establish Nereid's intrinsic brightness and orbital elements
Orbital elements
Orbital elements are the parameters required to uniquely identify a specific orbit. In celestial mechanics these elements are generally considered in classical two-body systems, where a Kepler orbit is used...
. Although the images obtained by the space probe did not have enough resolution to allow surface features to be distinguished, Voyager 2 was able to measure the size of Nereid and did find that it was grey in colour and had a higher albedo
Albedo
Albedo , or reflection coefficient, is the diffuse reflectivity or reflecting power of a surface. It is defined as the ratio of reflected radiation from the surface to incident radiation upon it...
than Neptune's other small satellites.

In the Larry Niven book Ringworld
Ringworld
Ringworld is a Hugo, Nebula, and Locus award-winning 1970 science fiction novel by Larry Niven, set in his Known Space universe and considered a classic of science fiction literature. It is followed by three sequels, and preceded by four prequels, and ties into numerous other books set in Known Space...
, Nereid is described as having been leased by the outsiders "half a millenium ago"
23rd century
The 23rd century is the century of the Christian Era or Common Era which, in the Gregorian calendar, begins on January 1, 2201 and ends on December 31, 2300.-List of the long total solar eclipses:* July 27, 2204: Solar eclipse, , of saros 139....
. The protagonist, Louis Wu
Louis Wu
Louis Gridley Wu, a fictional character, is the main protagonist in the Ringworld series of books, written by Larry Niven.Louis Wu was born in 2650 to Carlos Wu and Sharrol Janss. When he appears in Ringworld, Louis is 6'2" tall...
, speculates that the outsiders evolved on a gas giant moon similar to Nereid. In Niven's short story, "Flatlander" from the book Neutron Star, Beowulf Schaeffer accompanies an earth person nicknamed Elephant, the flatlander of the title, to buy information from the outsiders. Elephant asks for the location of the most interesting unknown planet in the 60 or so light year sphere of local space. He wants to go on an adventure and become famous. The story shows a glimpse of a fascinating powerful alien race and culture.
The source of this article is wikipedia, the free encyclopedia.  The text of this article is licensed under the GFDL.