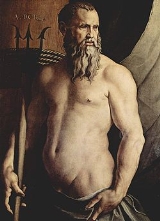 Overview
Neptune was the god of water and the sea
Water deity
A water deity is a deity in mythology associated with water or various bodies of water. Water deities are common in mythology and were usually more important among civilizations in which the sea or ocean, or a great river was more important...
in Roman mythology
Roman mythology
Roman mythology is the body of traditional stories pertaining to ancient Rome's legendary origins and religious system, as represented in the literature and visual arts of the Romans...
and religion
Religion in ancient Rome
Religion in ancient Rome encompassed the religious beliefs and cult practices regarded by the Romans as indigenous and central to their identity as a people, as well as the various and many cults imported from other peoples brought under Roman rule. Romans thus offered cult to innumerable deities...
. He is analogous with, but not identical to, the Greek god Poseidon
Poseidon
Poseidon was the god of the sea, and, as "Earth-Shaker," of the earthquakes in Greek mythology. The name of the sea-god Nethuns in Etruscan was adopted in Latin for Neptune in Roman mythology: both were sea gods analogous to Poseidon...
. In the Greek-influenced tradition
Interpretatio graeca
Interpretatio graeca is a Latin term for the common tendency of ancient Greek writers to equate foreign divinities to members of their own pantheon. Herodotus, for example, refers to the ancient Egyptian gods Amon, Osiris and Ptah as "Zeus", "Dionysus" and "Hephaestus", respectively.-Roman...
, Neptune was the brother of Jupiter
Jupiter (mythology)
In ancient Roman religion and myth, Jupiter or Jove is the king of the gods, and the god of the sky and thunder. He is the equivalent of Zeus in the Greek pantheon....
and Pluto
Pluto (mythology)
In ancient Greek religion and myth, Pluto was a name for the ruler of the underworld; the god was also known as Hades, a name for the underworld itself...
, each of them presiding over one of the three realms of the universe, Heaven, Earth and the Netherworld. Depictions of Neptune in Roman mosaic
Mosaic
Mosaic is the art of creating images with an assemblage of small pieces of colored glass, stone, or other materials. It may be a technique of decorative art, an aspect of interior decoration, or of cultural and spiritual significance as in a cathedral...
s, especially those of North Africa, are influenced by Hellenistic conventions.

Unlike the Greek Oceanus
Oceanus
Oceanus ; , Ōkeanós) was a pseudo-geographical feature in classical antiquity, believed by the ancient Greeks and Romans to be the world-ocean, an enormous river encircling the world....
, titan
Titan (mythology)
In Greek mythology, the Titans were a race of powerful deities, descendants of Gaia and Uranus, that ruled during the legendary Golden Age....
of the world-ocean, Neptune was associated as well with fresh water.

Do romans make festivals for neptune?

Who were his allies/friends/and partner in crime?
More

Are there any existing statues of Neptune at the time?

Did he have a festival?

How many temples did Neptune have?

Who were Neptune's elders and mentors?

What is Neptune?
More
x