It was first discovered by Harold J. Reitsema, William B. Hubbard, Larry A. Lebofsky and David J. Tholen
David J. Tholen
David James Tholen is an American astronomer at the Institute for Astronomy of the University of Hawaii, who specializes in planetary and solar system astronomy.-Professional life:...
, based on fortuitous ground-based stellar occultation observations on May 24, 1981, given the temporary designation S/1981 N 1 and announced on 29 May 1981. The moon was recovered and confirmed to be the only object in its orbit during the Voyager 2
Voyager 2
The Voyager 2 spacecraft is a 722-kilogram space probe launched by NASA on August 20, 1977 to study the outer Solar System and eventually interstellar space...
flyby in 1989 after which it received the additional designation S/1989 N 2 on August 2, 1989. The announcement by Stephen P. Synnott
Stephen P. Synnott
Stephen P. Synnott is an American astronomer Voyager scientist who discovered several moons of Jupiter, Saturn, Uranus, and Neptune.He discovered Metis, Puck, Larissa , Proteus, and Thebe.-References:...
spoke of “10 frames taken over 5 days”, which gives a recovery date sometime before July 28. The name was given on 16 September 1991. 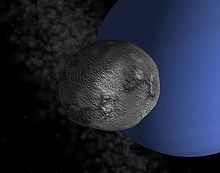 The fourth-largest satellite of Neptune, Larissa is irregular (non-spherical) in shape and appears to be heavily cratered
Impact crater
In the broadest sense, the term impact crater can be applied to any depression, natural or manmade, resulting from the high velocity impact of a projectile with a larger body...
, with no sign of any geological modification. Little else is known about it. It is likely that Larissa, like the other satellites inward of Triton
Triton (moon)
Triton is the largest moon of the planet Neptune, discovered on October 10, 1846, by English astronomer William Lassell. It is the only large moon in the Solar System with a retrograde orbit, which is an orbit in the opposite direction to its planet's rotation. At 2,700 km in diameter, it is...
, is a rubble pile
Rubble pile
In astronomy, rubble pile is the informal name for an object that is not a monolith, consisting instead of numerous pieces of rock that have coalesced under the influence of gravity...
re-accreted from fragments of Neptune's original satellites, which were smashed up by perturbations from Triton soon after that moon's capture into a very eccentric initial orbit.

Larissa's orbit is circular but not perfect and lies below Neptune's synchronous orbit
Synchronous orbit
A synchronous orbit is an orbit in which an orbiting body has a period equal to the average rotational period of the body being orbited , and in the same direction of rotation as that body.-Properties:...
radius, so it is slowly spiralling inward due to tidal deceleration and may eventually impact Neptune's atmosphere, or break up into a planetary ring
Planetary ring
A planetary ring is a ring of cosmic dust and other small particles orbiting around a planet in a flat disc-shaped region.The most notable planetary rings known in Earth's solar system are those around Saturn, but the other three gas giants of the solar system possess ring systems of their...
upon passing its Roche limit
Roche limit
The Roche limit , sometimes referred to as the Roche radius, is the distance within which a celestial body, held together only by its own gravity, will disintegrate due to a second celestial body's tidal forces exceeding the first body's gravitational self-attraction...
due to tidal stretching.