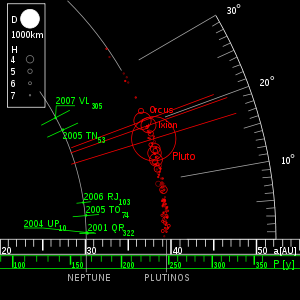 The discovery of in a high-inclination (>25°) orbit was significant as it suggested a “thick” cloud of trojans (Jupiter trojans have inclinations up to 40°). It is believed that large (radius ≈ 100 km) Neptune trojans could outnumber Jupiter trojans by an order of magnitude
Order of magnitude
An order of magnitude is the class of scale or magnitude of any amount, where each class contains values of a fixed ratio to the class preceding it. In its most common usage, the amount being scaled is 10 and the scale is the exponent being applied to this amount...
.

Both and were believed to be Neptune trojans when first discovered, but were later reclassified.


On August 12, 2010, the Minor Planet Center announced the discovery of the first known Neptune trojan, . Neptune's trailing L5 region is currently very difficult to observe because it is along the line-of-sight to the center of our galaxy, an area of the sky crowded with stars.

It may be possible for the New Horizons
New Horizons
New Horizons is a NASA robotic spacecraft mission currently en route to the dwarf planet Pluto. It is expected to be the first spacecraft to fly by and study Pluto and its moons, Charon, Nix, Hydra and S/2011 P 1. Its estimated arrival date at the Pluto-Charon system is July 14th, 2015...
spacecraft to investigate L5 Neptune trojans discovered by 2014, when it passes through this region of space en route to Pluto
Pluto
Pluto, formal designation 134340 Pluto, is the second-most-massive known dwarf planet in the Solar System and the tenth-most-massive body observed directly orbiting the Sun...
.

As of July 2011, eight Neptune trojan objects are known. This table is constructed from information obtained from the List Of Neptune Trojans maintained by the IAU
International Astronomical Union
The International Astronomical Union IAU is a collection of professional astronomers, at the Ph.D. level and beyond, active in professional research and education in astronomy...
Minor Planet Center
Minor Planet Center
The Minor Planet Center operates at the Smithsonian Astrophysical Observatory , which is part of the Center for Astrophysics along with the Harvard College Observatory ....
and with diameters from Sheppard and Trujillo's paper on 2008 LC18.