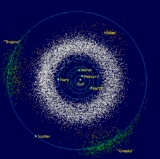 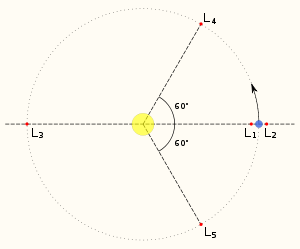 In astronomy
Astronomy
Astronomy is a natural science that deals with the study of celestial objects and phenomena that originate outside the atmosphere of Earth...
, a Trojan is a minor planet
Minor planet
An asteroid group or minor-planet group is a population of minor planets that have a share broadly similar orbits. Members are generally unrelated to each other, unlike in an asteroid family, which often results from the break-up of a single asteroid...
or natural satellite
Natural satellite
A natural satellite or moon is a celestial body that orbits a planet or smaller body, which is called its primary. The two terms are used synonymously for non-artificial satellites of planets, of dwarf planets, and of minor planets....
(moon) that shares an orbit with a larger planet or moon, but does not collide with it because it orbits around one of the two Lagrangian point
Lagrangian point
The Lagrangian points are the five positions in an orbital configuration where a small object affected only by gravity can theoretically be stationary relative to two larger objects...
s of stability (Trojan points), and , which lie approximately 60° ahead of and behind the larger body, respectively. Trojan objects are one type of co-orbital object
Co-orbital configuration
In astronomy, a co-orbital configuration refers to two or more celestial objects that orbit at the same, or very similar, distance from their parent object as each other, i.e. they are in a 1:1 mean motion resonance....
. In this arrangement, the massive star and the smaller planet orbit about their common barycenter—a location in space where the forces of their mutual gravitational attraction balance each other out. A much smaller mass located at one of the Lagrange points is subject to a combined gravitational force that acts through this barycenter. As a consequence, the mass can follow a circular orbit around this point with the same period
Orbital period
The orbital period is the time taken for a given object to make one complete orbit about another object.When mentioned without further qualification in astronomy this refers to the sidereal period of an astronomical object, which is calculated with respect to the stars.There are several kinds of...
as the planet, and the arrangement can remain stable over time.

Saturn
Saturn
Saturn is the sixth planet from the Sun and the second largest planet in the Solar System, after Jupiter. Saturn is named after the Roman god Saturn, equated to the Greek Cronus , the Babylonian Ninurta and the Hindu Shani. Saturn's astronomical symbol represents the Roman god's sickle.Saturn,...
has the most known Trojan satellites: Saturn's moon Tethys
Tethys (moon)
Tethys or Saturn III is a mid-sized moon of Saturn about across. It was discovered by G. D. Cassini in 1684 and is named after titan Tethys of Greek mythology. Tethys is pronounced |Odysseus]] is about 400 km in diameter, while the largest graben—Ithaca Chasma is about 100 km wide and...
has two Trojan moons (Telesto
Telesto (moon)
Telesto is a moon of Saturn. It was discovered by Smith, Reitsema, Larson and Fountain in 1980 from ground-based observations, and was provisionally designated '. In the following months, several other apparitions were observed: , , and ....
and Calypso
Calypso (moon)
Calypso is a moon of Saturn. It was discovered in 1980, from ground-based observations, by Dan Pascu, P. Kenneth Seidelmann, William A. Baum, and Douglas G. Currie, and was provisionally designated ' . Several other apparitions of it were recorded in the following months: , , , and...
), and Dione
Dione (moon)
Dione is a moon of Saturn discovered by Cassini in 1684. It is named after the titan Dione of Greek mythology. It is also designated Saturn IV.- Name :...
also has two Trojan moons (Helene
Helene (moon)
Helene is a moon of Saturn. It was discovered by Pierre Laques and Jean Lecacheux in 1980 from ground-based observations at Pic du Midi Observatory, and was designated . In 1988 it was officially named after Helen of Troy, who was the granddaughter of Cronus in Greek mythology...
and Polydeuces
Polydeuces (moon)
Polydeuces is a very small natural satellite of Saturn that is co-orbital with Dione and librates around the trailing Lagrangian point . Its diameter is estimated to be about 3.5 km....
).

In 2011, NASA announced the discovery of the first known Earth Trojan
2010 TK7
2010 TK7 is the first Earth trojan asteroid to be discovered; it precedes Earth in its orbit around the Sun. Trojan objects are most easily conceived as orbiting at a Lagrangian point, a dynamically stable location 60 degrees ahead of or behind a massive orbiting body, in a type of 1:1 orbital...
. 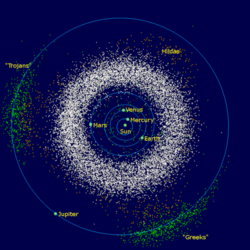 In 1772 the French mathematician and astronomer Joseph-Louis Lagrange predicted the existence and location of two groups of small bodies located near a pair of gravitationally stable points along Jupiter’s orbit. The term originally referred to the Trojan asteroids orbiting around Jupiter
Jupiter
Jupiter is the fifth planet from the Sun and the largest planet within the Solar System. It is a gas giant with mass one-thousandth that of the Sun but is two and a half times the mass of all the other planets in our Solar System combined. Jupiter is classified as a gas giant along with Saturn,...
's Lagrangian points, which are by convention named after figures from the Trojan War
Trojan War
In Greek mythology, the Trojan War was waged against the city of Troy by the Achaeans after Paris of Troy took Helen from her husband Menelaus, the king of Sparta. The war is among the most important events in Greek mythology and was narrated in many works of Greek literature, including the Iliad...
of Greek mythology
Greek mythology
Greek mythology is the body of myths and legends belonging to the ancient Greeks, concerning their gods and heroes, the nature of the world, and the origins and significance of their own cult and ritual practices. They were a part of religion in ancient Greece...
. By convention, the asteroids orbiting Jupiter's L4 point are named after the heroes from the Greek side of the war, while those at L5 are from the Trojan side. The two exceptions, the Greek-themed 617 Patroclus
617 Patroclus
617 Patroclus is a binary minor planet made up of two similarly-sized objects orbiting their common centre of gravity. It is a Trojan asteroid, sharing an orbit with Jupiter. It was discovered in 1906 by August Kopff, and was the second trojan to be discovered...
and the Trojan-themed 624 Hektor
624 Hektor
624 Hektor is the largest Jupiter Trojan. It was discovered in 1907 by August Kopff.Hektor is a D-type asteroid, dark and reddish in colour. It lies in Jupiter's leading Lagrangian point, , called the 'Greek' node after one of the two sides in the legendary Trojan War...
, were actually assigned to the wrong sides. Astronomers estimate that the Jupiter Trojans are comparable in number to the asteroids of the asteroid belt
Asteroid belt
The asteroid belt is the region of the Solar System located roughly between the orbits of the planets Mars and Jupiter. It is occupied by numerous irregularly shaped bodies called asteroids or minor planets...
.

Subsequently objects have been found orbiting the Lagrangian points of Neptune
Neptune
Neptune is the eighth and farthest planet from the Sun in the Solar System. Named for the Roman god of the sea, it is the fourth-largest planet by diameter and the third largest by mass. Neptune is 17 times the mass of Earth and is slightly more massive than its near-twin Uranus, which is 15 times...
, Mars
Mars
Mars is the fourth planet from the Sun in the Solar System. The planet is named after the Roman god of war, Mars. It is often described as the "Red Planet", as the iron oxide prevalent on its surface gives it a reddish appearance...
, and Earth
Earth
Earth is the third planet from the Sun, and the densest and fifth-largest of the eight planets in the Solar System. It is also the largest of the Solar System's four terrestrial planets...
. Asteroids at the Lagrangian points of planets other than Jupiter may be called Lagrangian asteroids.