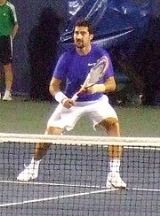 Encyclopedia
Nenad Zimonjić is a professional Serbia
Serbia
Serbia , officially the Republic of Serbia , is a landlocked country located at the crossroads of Central and Southeast Europe, covering the southern part of the Carpathian basin and the central part of the Balkans...
n tennis
Tennis
Tennis is a sport usually played between two players or between two teams of two players each . Each player uses a racket that is strung to strike a hollow rubber ball covered with felt over a net into the opponent's court. Tennis is an Olympic sport and is played at all levels of society at all...
player who is currently ranked
ATP Entry Ranking
The 'Tennis men', as defined by the Association of Tennis Professionals , are the "objective merit-based method used for determining qualification for entry and seeding in all tournaments for both singles and doubles, except as modified for the ARAG ATP World Tour Team Championship and Barclays ATP...
World No. 3 in men's doubles. He is the second tennis doubles player from Serbia to hold the World No.1, after Slobodan Živojinović
Slobodan Živojinovic
Slobodan Živojinović is a retired Serbian tennis player who competed for SFR Yugoslavia. Together with Nenad Zimonjić he is the only tennis player from Serbia that held the highest doubles ranking. Živojinović is president of Serbia Tennis Federaton....
.

Zimonjić turned pro in 1995 and remained relatively unknown outside his native country until a surprise victory in the Mixed Doubles at the 2004 Australian Open
2004 Australian Open
The 2004 Australian Open was a Grand Slam tournament held in Melbourne, Australia 19 January to 1 February, 2004.-Men's Singles: Roger Federer def. Marat Safin, 7–6, 6–4, 6–2...
. Paired for the first time with Russian Elena Bovina
Elena Bovina
Elena Olegovna Bovina is a Russian professional female tennis player. On April 4, 2005 Bovina reached her career-high singles ranking: World No. 14....
, he beat defending champions Martina Navratilova and Leander Paes
Leander Paes
Leander Adrian Paes, pronounced pās, is an Indian professional tennis player who currently features in the doubles events in the ATP tour and the Davis Cup tournament...
in straight sets in an hour and nine minutes 6–1, 7–6 . Alongside Katarina Srebotnik
Katarina Srebotnik
Katarina Srebotnik is a Slovenian professional tennis player. Srebotnik is right-handed, 1.80 m, weighs 65 kg and lives in Dubai. She reached a career-high ranking of No. 20 on the Sony Ericsson WTA Tour on August 7, 2006.Srebotnik won 4 singles titles on the WTA-tour and was a steady top 30...
of Slovenia
Slovenia
Slovenia , officially the Republic of Slovenia , is a country in Central and Southeastern Europe touching the Alps and bordering the Mediterranean. Slovenia borders Italy to the west, Croatia to the south and east, Hungary to the northeast, and Austria to the north, and also has a small portion of...
, he won the 2006 French Open
2006 French Open
The 2006 French Open was held in Paris, France from May 28 to June 11, 2006. Both defending champions, Rafael Nadal and Justine Henin-Hardenne, retained their titles. It is one of the four tennis Grand Slams. This edition made history as it became the first Grand Slam tournament to start on a...
crown with a straight-sets victory over Daniel Nestor
Daniel Nestor
Daniel Mark Nestor, CM , born Danijel Nestorović September 4, 1972, in Belgrade, Yugoslavia, is a Serbian-born Canadian professional tennis player from Toronto, Ontario, Canada....
and Elena Likhovtseva
Elena Likhovtseva
Elena Alexandrovna Likhovtseva is a Russian tennis player, currently inactive. She turned professional in January 1992 at the age of 16.Likhovtseva's career best appearance in a Grand Slam was when she reached the semi finals of the French Open 2005 before she was defeated by Mary Pierce, 6–1 6–1...
, 6–3, 6–4. At the 2006 Wimbledon Championships
2006 Wimbledon Championships
The 2006 Wimbledon Championships began on 26 June and finished on 9 July 2006.-Gentlemen's singles: Roger Federer defeated Rafael Nadal 6-0 7-6 6-7 6-3-Ladies' singles: Amélie Mauresmo defeated Justine Henin-Hardenne 2-6 6-3 6-4...
, Zimonjić reached the final of the Men's Doubles (alongside France's Fabrice Santoro
Fabrice Santoro
Fabrice Vetea Santoro is a retired French professional male tennis player from Tahiti. Though not counted among the top ranked players, he had an unusually long professional career – with many of his accomplishments coming toward the end of his career – and he is popular among spectators and other...
) and the quarter-finals of the Mixed Doubles.

In 2007, Zimonjić reached the 2007 French Open
2007 French Open
The 2007 French Open was held in Paris, France from 27 May through to 10 June 2007. Followed two weeks later, as usual, by Wimbledon in London, United Kingdom. Rafael Nadal became the first man to win the tournament 3 times consecutively since Björn Borg, 1978–81; and maintained his unbeaten run...
mixed doubles final as the defending champions with Katarina Srebotnik
Katarina Srebotnik
Katarina Srebotnik is a Slovenian professional tennis player. Srebotnik is right-handed, 1.80 m, weighs 65 kg and lives in Dubai. She reached a career-high ranking of No. 20 on the Sony Ericsson WTA Tour on August 7, 2006.Srebotnik won 4 singles titles on the WTA-tour and was a steady top 30...
and lost to Nathalie Dechy
Nathalie Dechy
Nathalie Dechy is a French former professional tour tennis player.Dechy is a three-time doubles Grand Slam champion, winning the 2006 US Open women's doubles title with Vera Zvonareva, the 2007 French Open mixed doubles title with Andy Ram, and the 2007 US Open women's doubles title with Dinara...
and Andy Ram
Andy Ram
Andy Ram is a professional tennis player from Israel, and the first Israeli tennis player to win a seniors Grand Slam event . He plays more doubles than singles as he prefers doubles more and wins more matches...
. He left Fabrice Santoro after Wimbledon and teamed with Mahesh Bhupathi
Mahesh Bhupathi
Mahesh Shrinivas Bhupathi is an Indian professional tennis player widely regarded as among the best doubles players in the world with 11 Grand Slam titles to his credit. In 1997, he became the first Indian to win a Grand Slam tournament...
until after the 2007 US Open. After the US Open, Nenad left Bhupathi and partnered with Daniel Nestor
Daniel Nestor
Daniel Mark Nestor, CM , born Danijel Nestorović September 4, 1972, in Belgrade, Yugoslavia, is a Serbian-born Canadian professional tennis player from Toronto, Ontario, Canada....
who won the French Open earlier in the year alongside Mark Knowles
Mark Knowles
Mark Knowles is a former World number 1 doubles professional male tennis player from the Bahamas, who will go down as one of the greatest athletes of his country for his longevity within his sport and charitable contributions off the court.After being awarded a scholarship to the Nick...
. The team won the 2007 St. Petersburg Open
2007 St. Petersburg Open
The 2007 St. Petersburg Open was a tennis tournament played on indoor carpet courts. It was the 13th edition of the St. Petersburg Open, and was part of the International Series of the 2007 ATP Tour. It took place at the Petersburg Sports and Concert Complex in Saint Petersburg, Russia, from...
without losing a set. Nestor and Zimonjić later won 2008 Wimbledon (Zimonjić's first Grand Slam), 2009 Wimbledon and 2010 French Open
2010 French Open
The 2010 French Open was a tennis tournament played on outdoor clay courts. It was the 109th edition of the French Open, and the second Grand Slam event of the year...
.

While Zimonjić is known as a doubles specialist, he has recorded two big wins in his singles career. In 2004 he defeated Andre Agassi
Andre Agassi
Andre Kirk Agassi is a retired American professional tennis player and former world no. 1. Generally considered by critics and fellow players to be one of the greatest tennis players of all time, Agassi has been called the best service returner in the history of the game...
6–2, 7–6 in St Pölten and in 2005 on the grass of Halle
Halle, North Rhine-Westphalia
Halle is a town in the German Bundesland of North Rhine-Westphalia and belongs to the district of Gütersloh....
he defeated Nicolas Kiefer
Nicolas Kiefer
Nicolas Kiefer , is a former German professional tennis player. His mother, Nicole, is French. He won a silver medal in men's doubles with partner Rainer Schüttler at the 2004 Summer Olympics in Athens....
6–7, 6–3, 6–4, both of these were first round victories.

In 2010, Serbia won its first ever Davis Cup title, following the victories over United States (3–2), Croatia
Croatia Davis Cup team
The Croatia Davis Cup team represents Croatia in Davis Cup tennis competition and are governed by the Croatian Tennis Association.Croatia won the Davis Cup in 2005...
(4–1), Czech Republic
Czech Republic Davis Cup team
The Czech Republic Davis Cup team represents the Czech Republic in Davis Cup tennis competition and are governed by the Czech Tennis Federation. The Czech team was started in 1993, following the Czechoslovakian break-up....
(3–2), and France
France Davis Cup team
The France Davis Cup team represents France in Davis Cup tennis competition, and is governed by the Fédération Française de Tennis.France is the third most successful nation, with 9 wins...
in the final match (3–2). Zimonjić played in all four double matches over the course of the competition, winning once (against Croatia, partnering Tipsarević) and losing the other three times (partnering Tipsarević, Đoković and Troicki, respectively). To celebrate the winning of the trophy, all of the players shaved their heads, the central celebration was held in Belgrade in front of several thousands of fans, and the Serbian national postal service
Pošta Srbije
Pošta Srbije is the national postal service of Serbia with its base in the capital, Belgrade. Public postal traffic was introduced in Serbia in 1840. The first stamp was printed in 1866...
issued a stamp picturing the players.