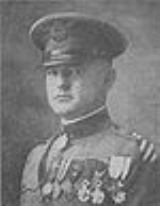 Nelson Miles Holderman was born in Trumbull, Nebraska
Trumbull, Nebraska
Trumbull is a village in Adams and Clay Counties in the U.S. state of Nebraska. The population was 212 at the 2000 census. It is part of the Hastings, Nebraska Micropolitan Statistical Area.- Geography :...
in 1885 and named Nebuchadnezzar. Upon reaching his 18th birthday he requested permission from his parents to legally change his name to Nelson Miles after a military officer that his father had served under who had been a Civil War
American Civil War
The American Civil War was a civil war fought in the United States of America. In response to the election of Abraham Lincoln as President of the United States, 11 southern slave states declared their secession from the United States and formed the Confederate States of America ; the other 25...
hero and Medal of Honor recipient. He was the second oldest son in a family which included three older sisters and two brothers. In 1893, his family moved to Tustin, California
Tustin, California
-Top employers:According to the City's 2010 Comprehensive Annual Financial Report, the top employers in the city are:-2010:The 2010 United States Census reported that Tustin had a population of 75,540. The population density was 6,816.7 people per square mile...
where his parents bought 30 acres (121,405.8 m²) of land to grow oranges
Orange (fruit)
An orange—specifically, the sweet orange—is the citrus Citrus × sinensis and its fruit. It is the most commonly grown tree fruit in the world....
, walnuts and apricots.

In 1916, Holderman enlisted as a private
Private (rank)
A Private is a soldier of the lowest military rank .In modern military parlance, 'Private' is shortened to 'Pte' in the United Kingdom and other Commonwealth countries and to 'Pvt.' in the United States.Notably both Sir Fitzroy MacLean and Enoch Powell are examples of, rare, rapid career...
in the Santa Ana
Santa Ana, California
Santa Ana is the county seat and second most populous city in Orange County, California, and with a population of 324,528 at the 2010 census, Santa Ana is the 57th-most populous city in the United States....
unit of the California National Guard
California National Guard
The California National Guard is the component of the United States National Guard in the U.S. state of California. It comprises both Army and Air National Guard components and is the largest national guard force in the United States with a total authorized strength of 22,900 soldiers and airmen...
. From June to October of that year, he participated in patrols on the United States–Mexico border
United States–Mexico border
The United States–Mexico border is the international border between the United States and Mexico. It runs from Imperial Beach, California, and Tijuana, Baja California, in the west to Matamoros, Tamaulipas, and Brownsville, Texas, in the east, and traverses a variety of terrains, ranging from major...
during the time of Pancho Villa
Pancho Villa
José Doroteo Arango Arámbula – better known by his pseudonym Francisco Villa or its hypocorism Pancho Villa – was one of the most prominent Mexican Revolutionary generals....
's raids. Holderman quickly rose through the ranks and by the time the United States entered World War I, he had become captain
Captain (OF-2)
The army rank of captain is a commissioned officer rank historically corresponding to command of a company of soldiers. The rank is also used by some air forces and marine forces. Today a captain is typically either the commander or second-in-command of a company or artillery battery...
in charge of Company L of his Santa Ana unit.

Company L was assigned as replacements of Company K, 307th Infantry Regiment, 77th Division of the American Expeditionary Force
American Expeditionary Force
The American Expeditionary Forces or AEF were the United States Armed Forces sent to Europe in World War I. During the United States campaigns in World War I the AEF fought in France alongside British and French allied forces in the last year of the war, against Imperial German forces...
. Even though Holderman was a replacement officer for Company K, he was very well respected by the soldiers under his command due in part to his previous experience prior to the war. As an officer he was regarded as a "soldier's soldier" who never turned down a patrol
Patrol
A patrol is commonly a group of personnel, such as police officers or soldiers, that are assigned to monitor a specific geographic area.- Military :...
and saw his military service as "an adventure". His unit was part of the Meuse-Argonne Campaign
Meuse-Argonne Offensive
The Meuse-Argonne Offensive, or Maas-Argonne Offensive, also called the Battle of the Argonne Forest, was a part of the final Allied offensive of World War I that stretched along the entire western front.-Overview:...
. On October 3, 1918 a major offensive began whose purpose was to break the German line in the Argonne forest
Forest of Argonne
The Forest of Argonne is a long strip of rocky mountain and wild woodland in north-eastern France.In 1792 Charles François Dumouriez outmaneuvered the invading forces of the Duke of Brunswick in the forest before the Battle of Valmy....
. Of all the units who took part in the initial assault, elements of two battalions under the command of Major Charles White Whittlesey
Charles White Whittlesey
Lt. Colonel Charles White Whittlesey was an American Medal of Honor recipient who is notable for leading the "Lost Battalion" in the Argonne Forest during World War I.-Early life and education:...
were able to break through. However, as the only units to have reached their objectives they had gone too far into German territory and were subsequently cut off.
Initial attempts were made to reach Whittlesey and his men but all the units were met with heavy resistance and had to pull back. Only Holderman's Company K, composed of 97 men, had managed to reach Whittlesey's units which, incorrectly became known as "The Lost Battalion" even though there were two such units of that size. With not enough men able to close the distance between Whittlesey and the American lines, Holderman and his company subsequently became part of the Lost Battalion. Holderman was tasked to command the right flank. Though severely wounded early in the five day siege, Holderman continued to lead his men until finally being relieved.

Captain Holderman commanded a company of a battalion which was cut off and surrounded by the enemy. He was wounded on 4, 5, and 7 October, but throughout the entire period, suffering great pain and subjected to fire of every character, he continued personally to lead and encourage the officers and men under his command with unflinching courage and with distinguished success. On 6 October, in a wounded condition, he rushed through enemy machinegun and shell fire and carried 2 wounded men to a place of safety.

Among Holderman's decorations and medals were the following:

The Captain Nelson M. Holderman U.S. Army Reserve Center in West Los Angeles, California
California
California is a state located on the West Coast of the United States. It is by far the most populous U.S. state, and the third-largest by land area...
is named in his honor, as is the main building on the grounds, Holderman Hall.