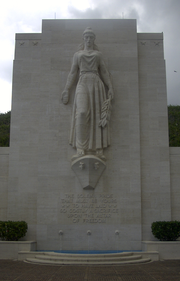 The cemetery is located in Punchbowl Crater
Punchbowl Crater
Punchbowl Crater is an extinct volcanic tuff cone located in Honolulu, Hawaii. It is the location of the National Memorial Cemetery of the Pacific....
(Pūowaina in Hawaiian
Hawaiian language
The Hawaiian language is a Polynesian language that takes its name from Hawaii, the largest island in the tropical North Pacific archipelago where it developed. Hawaiian, along with English, is an official language of the state of Hawaii...
), located just north of downtown Honolulu (a bit confusing to find due to several small turns, access Punchbowl by taking Ward Avenue off of Ala Moana Boulevard, and then taking a right on Prospect Street and following the signs into the Punchbowl; the cemetery is also accessible from H1 or the Pali Highway). In ancient times Punchbowl was used as a site for human sacrifice
Human sacrifice
Human sacrifice is the act of killing one or more human beings as part of a religious ritual . Its typology closely parallels the various practices of ritual slaughter of animals and of religious sacrifice in general. Human sacrifice has been practised in various cultures throughout history...
s, and pū-o-waina means "hill of placing (human sacrifices)."

In February 1948 Congress approved funding and construction began on the national cemetery. Since the cemetery was dedicated on September 2, 1949, 34,000 veterans of World War I
World War I
World War I , which was predominantly called the World War or the Great War from its occurrence until 1939, and the First World War or World War I thereafter, was a major war centred in Europe that began on 28 July 1914 and lasted until 11 November 1918...
, World War II
World War II
World War II, or the Second World War , was a global conflict lasting from 1939 to 1945, involving most of the world's nations—including all of the great powers—eventually forming two opposing military alliances: the Allies and the Axis...
, the Korean
Korean War
The Korean War was a conventional war between South Korea, supported by the United Nations, and North Korea, supported by the People's Republic of China , with military material aid from the Soviet Union...
, and Vietnam
Vietnam War
The Vietnam War was a Cold War-era military conflict that occurred in Vietnam, Laos, and Cambodia from 1 November 1955 to the fall of Saigon on 30 April 1975. This war followed the First Indochina War and was fought between North Vietnam, supported by its communist allies, and the government of...
wars have been interred. The cemetery is now full except for cremated remains and, in some cases, casketed remains of family members of those interred there. A new veterans cemetery (Hawaii State Veterans Cemetery (21.38898°N 157.787141°W)) has been built and dedicated on the windward side of O'ahu
Oahu
Oahu or Oahu , known as "The Gathering Place", is the third largest of the Hawaiian Islands and most populous of the islands in the U.S. state of Hawaii. The state capital Honolulu is located on the southeast coast...
at Kāne'ohe.

Prior to the opening of the cemetery for the recently deceased, the remains of soldiers from locations around the Pacific Theater—including Guam
Guam
Guam is an organized, unincorporated territory of the United States located in the western Pacific Ocean. It is one of five U.S. territories with an established civilian government. Guam is listed as one of 16 Non-Self-Governing Territories by the Special Committee on Decolonization of the United...
, Wake Island
Wake Island
Wake Island is a coral atoll having a coastline of in the North Pacific Ocean, located about two-thirds of the way from Honolulu west to Guam east. It is an unorganized, unincorporated territory of the United States, administered by the Office of Insular Affairs, U.S. Department of the Interior...
, and Japanese POW camps—were transported to Hawaii for final interment. The first interment was made January 4, 1949. The cemetery opened to the public on July 19, 1949, with services for five war dead: an unknown serviceman, two Marines, an Army lieutenant and one civilian—noted war correspondent Ernie Pyle
Ernie Pyle
Ernest Taylor Pyle was an American journalist who wrote as a roving correspondent for the Scripps Howard newspaper chain from 1935 until his death in combat during World War II. He won the Pulitzer Prize in 1944...
. Initially, the graves at National Memorial Cemetery of the Pacific were marked with white wooden cross
Cross
A cross is a geometrical figure consisting of two lines or bars perpendicular to each other, dividing one or two of the lines in half. The lines usually run vertically and horizontally; if they run obliquely, the design is technically termed a saltire, although the arms of a saltire need not meet...
es and Stars of David—like the American cemeteries abroad—in preparation for the dedication ceremony on the fourth anniversary of V-J Day. Eventually, over 13,000 soldiers and sailors who died during World War II would be laid to rest in the Punchbowl. Despite the Army's extensive efforts to inform the public that the star- and cross-shaped grave markers were only temporary, an outcry arose in 1951 when permanent flat granite markers replaced them.

In August 2001, about 70 generic unknown markers for the graves of men known to have died during the attack on Pearl Harbor
Attack on Pearl Harbor
The attack on Pearl Harbor was a surprise military strike conducted by the Imperial Japanese Navy against the United States naval base at Pearl Harbor, Hawaii, on the morning of December 7, 1941...
were replaced with markers that included USS Arizona
USS Arizona (BB-39)
USS Arizona, a , was built for the United States Navy in the mid-1910s. Named in honor of the 48th state's recent admission into the union, the ship was the second and last of the Pennsylvania class of "super-dreadnought" battleships. Although commissioned in 1916, the ship remained stateside...
after it was determined they perished on this vessel. In addition, new information that identified grave locations of 175 men whose graves were previously marked as unknown resulted in the installation of new markers in October 2002.

The National Memorial Cemetery of the Pacific contains a memorial pathway that is lined with a variety of memorials that honor America's veterans from various organizations. As of 2005, there were 63 such memorials throughout the National Memorial Cemetery of the Pacific—most commemorating soldiers of 20th-century wars, including those killed at Pearl Harbor.


"Operation Glory" and the Punchbowl Cemetery

After their retreat in 1950, dead Marines and soldiers were buried at a temporary gravesite near Hungnam, North Korea. During "Operation Glory" which occurred from July to November 1954 the dead of each side were exchanged; remains of 4,167 US soldiers/Marines were exchanged for 13,528 North Korean/Chinese dead. In addition 546 civilians who died in United Nations Prisoner of War camps were turned over to the South Korean Government. After "Operation Glory" 416 Korean War "unknowns" were buried in the Punchbowl Cemetery. According to one report, 1,394 names were also transmitted during "Operation Glory" from the Chinese and North Koreans {of whom 858 names proved to be correct}; of the 4,167 returned remains were found to be 4,219 individuals of whom 2,944 were found to be Americans of whom all but 416 were identified by name. Of 239 Korean War unaccounted for: 186 not associated with Punchbowl unknowns (176 were identified and of the remaining 10 cases 4 were non-Americans of Asiatic descent; one was British; 3 were identified and 2 cases unconfirmed). Fifty-seven years after the Korean War, remains of two of the "Punchbowl unknowns" were identified-both from the 1st Marine Division: one was Pfc. Donald Morris Walker of Support Company/1st Service Battalion/1st Marine Division who was KIA Dec 7, 1950; the other was Pfc. Carl West of Weapons Company/1st Battalion/7th Regiment/1st Marine Division who was KIA Dec 10, 1950.
In 2011 remains of an unknown USAF pilot from Operation Glory were Identified from the "Punchbowl Cemetery"; POW remains from "Operation Glory" were also identified in 2011

From 1990 to 1994, North Korea excavated and turned over 208 sets of remains-possibly containing remains of 200-400 US Servicemen-but few identified because of co-mingling of remains.In 2011 remains were identifed

From 1996 to 2006, 220 remains were recovered near the Chinese border. In 2008, a total of 63 were identified (26 World War II; 19 Korea; 18 Vietnam) (Among those identified: January 2008 remains of a Michigan soldier. In March 2008, remains of an Indiana soldier and an Ohio soldier were identified). According to a report June 24, 2008, of 10 Korean War Remains disinterred from the "Punchbowl Cemetery" six have been identified. From January to April 2009, a total of twelve Unknowns have been identified-three from World War II; eight from Korean War; one from Vietnam. In 2011 remains returned in 2000 were identifed

In 1964, the American Battle Monuments Commission erected the Honolulu Memorial at the National Memorial Cemetery "to honor the sacrifices and achievements of American Armed Forces in the Pacific during World War II and in the Korean War." The memorial was later expanded in 1980 to include the Vietnam War. The names of 28,788 military personnel who are missing in action or were lost or buried at sea in the Pacific during these conflicts are listed on marble slabs in ten Courts of the Missing which flank the Memorial's grand stone staircase.

The dedication stone at the base of staircase is engraved with the following words:

At the top of the staircase in the Court of Honor is a statue of Lady Columbia, also known as Lady Liberty, or Justice. Here she is reported to represent all grieving mothers. She stands on the bow of a ship holding a laurel branch. The inscription below the statue, taken from Abraham Lincoln
Abraham Lincoln
Abraham Lincoln was the 16th President of the United States, serving from March 1861 until his assassination in April 1865. He successfully led his country through a great constitutional, military and moral crisis – the American Civil War – preserving the Union, while ending slavery, and...
's letter to Mrs. Bixby
Letter to Mrs. Bixby
The Bixby letter is a letter sent from the United States President Abraham Lincoln to a bereaved mother of five sons who were thought to have died while fighting for the Union in the American Civil War. The brief, consoling message was written in November 1864 to Lydia Bixby, a widow living in...
, reads:

The statue is featured in the opening sequence of the both the 1970s television series Hawaii Five-O
Hawaii Five-O
Hawaii Five-O is an American police procedural drama series produced by CBS Productions and Leonard Freeman. Set in Hawaii, the show originally aired for twelve seasons from 1968 to 1980, and continues in reruns. The show featured a fictional state police unit run by Detective Steve McGarrett,...
and its 2010 remake. The latter series has also filmed at the cemetery, where the father of lead character Steve McGarrett is buried near the statue.