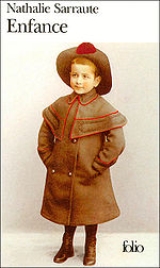 Encyclopedia
Nathalie Sarraute was a French lawyer and writer of Russian Jewish origin. 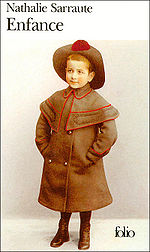 Sarraute was born Natalia/Natacha Tcherniak (Russian Наталья Черняк, Natalya Chernyak) in Ivanovo
Ivanovo
Ivanovo is a city and the administrative center of Ivanovo Oblast, Russia. Population: Ivanovo has traditionally been called the textile capital of Russia. Since most textile workers are women, it has also been known as the "City of Brides"...
(then known as Ivanovo-Voznesensk), 300 km north-east of Moscow in 1900 (although she frequently referred to the year of her birth as 1902, a date still cited in select reference works), and, following the divorce of her parents, spent her childhood shuttled between France and Russia. In 1909 she moved to Paris with her father. Sarraute studied law and literature at the prestigious Sorbonne
Sorbonne
The Sorbonne is an edifice of the Latin Quarter, in Paris, France, which has been the historical house of the former University of Paris...
, having a particular fondness for 20th century literature and the works of Marcel Proust
Marcel Proust
Valentin Louis Georges Eugène Marcel Proust was a French novelist, critic, and essayist best known for his monumental À la recherche du temps perdu...
and Virginia Woolf
Virginia Woolf
Adeline Virginia Woolf was an English author, essayist, publisher, and writer of short stories, regarded as one of the foremost modernist literary figures of the twentieth century....
, who greatly affected her conception of the novel, then later studied history at Oxford
Oxford
The city of Oxford is the county town of Oxfordshire, England. The city, made prominent by its medieval university, has a population of just under 165,000, with 153,900 living within the district boundary. It lies about 50 miles north-west of London. The rivers Cherwell and Thames run through...
and sociology in Berlin, before passing the French bar exam (1926-1941) and becoming a lawyer.

In 1925, she married Raymond Sarraute, a fellow lawyer, with whom she would have three daughters. In 1932 she wrote her first book, Tropismes, a series of brief sketches and memories that set the tone for her entire oeuvre. The novel was first published in 1939, although the impact of World War II stunted its popularity. In 1941, Sarraute, who was Jewish, was released from her work as a lawyer as a result of Nazi law. During this time, she went into hiding and made arrangements to divorce her husband in an effort to protect him (although they would eventually stay together).

Sarraute dedicated herself to literature, with her most prominent work being Portrait of a Man Unknown (1948), a work applauded by Jean-Paul Sartre
Jean-Paul Sartre
Jean-Paul Charles Aymard Sartre was a French existentialist philosopher, playwright, novelist, screenwriter, political activist, biographer, and literary critic. He was one of the leading figures in 20th century French philosophy, particularly Marxism, and was one of the key figures in literary...
, who famously referred to it as an "anti-novel" and who also contributed a foreword. Despite such high critical praise, however, the work only drew notice from literary insiders, as did her follow-up, Martereau.

Sarraute's essay The Age of Suspicion (L'Ère du soupçon, 1956) served as a prime manifesto for the nouveau roman
Nouveau roman
The nouveau roman is a type of 1950s French novel that diverged from classical literary genres. Émile Henriot coined the title in an article in the popular French newspaper Le Monde on May 22, 1957 to describe certain writers who experimented with style in each novel, creating an essentially new...
literary movement, alongside Alain Robbe-Grillet
Alain Robbe-Grillet
Alain Robbe-Grillet , was a French writer and filmmaker. He was, along with Nathalie Sarraute, Michel Butor and Claude Simon, one of the figures most associated with the Nouveau Roman trend. Alain Robbe-Grillet was elected a member of the Académie française on March 25, 2004, succeeding Maurice...
's For a New Novel. Sarraute became, along with Robbe-Grillet, Claude Simon
Claude Simon
Claude Simon was a French novelist and the 1985 Nobel Laureate in Literature. He was born in Antananarivo, Madagascar, and died in Paris, France....
, Marguerite Duras
Marguerite Duras
Marguerite Donnadieu, better known as Marguerite Duras was a French writer and film director.-Background:...
, and Michel Butor
Michel Butor
-Life and work:Michel Marie François Butor was born in Mons-en-Barœul. He studied philosophy at the Sorbonne, graduating in 1947. He has taught in Egypt, Manchester, Salonika, the United States, and Geneva...
, one of the figures most associated with the rise of this new trend in writing, which sought to radically transform traditional narrative models of character and plot. Sarraute was awarded the Prix international de littérature
Prix Formentor
The Prix Formentor was an international literary prize awarded between 1961 and 1967. The Formentor Group offered two prizes, the Prix Formentor and the Prix International, . The Prix Formentor was given to previously unpublished work and the the Prix International was given to work already in...
for her novel The Golden Fruits in 1963, which led to greater popularity and exposure for the author. That same year, Sarraute also began working as a dramatist, authoring a total of seven plays, including Le Silence (1963), Le Mensonge (1965) and Elle est là (1993). As a result of Sarraute's growing popularity and public profile, she was invited to speak at a number of literary events both in her native country of France and abroad.

Sarraute's work, including the novels Between Life and Death (1968), The Use of Speech (1980) and You Don't Love Yourself (1989), have been translated into more than 30 languages. Her work has often been referred to as "difficult," as a result of her experimental style and abandonment of traditional literary conventions. Sarraute celebrated the death of the literary "character" and placed her primary emphasis on the creation of a faithful depiction of psychological phenomena, as in her novella The Golden Fruits, consisting entirely of interior monologues, and the novel The Planetarium (1959), which focuses on a young man's obsession with inheriting his aunt's apartment. The constantly shifting perspectives and points of view in Sarraute's work serves to undermine the author's hand, while at the same time embracing the incoherence of lived experience.