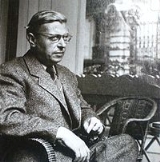 How we can be being in itself ? being for itself ? and being for others ?
More

He was free, free in every way, free to behave like a fool or a machine, free to accept, free to refuse, free to equivocate; to marry, to give up the game, to drag this death weight about with him for years to come. He could do what he liked, no one had the right to advise him, there would be for him no Good or Evil unless he thought them into being.

What then did you expect when you unbound the gag that muted those black mouths? That they would chant your praises? Did you think that when those heads that our fathers had forcibly bowed down to the ground were raised again, you would find adoration in their eyes?

Every age has its own poetry; in every age the circumstances of history choose a nation, a race, a class to take up the torch by creating situations that can be expressed or transcended only through poetry.

Fascism is not defined by the number of its victims, but by the way it kills them.

Our responsibility is much greater than we might have supposed, because it involves all mankind.

To choose this or that is to affirm at the same time the value of what we choose, because we can never choose evil. We always choose the good, and nothing can be good for us without being good for all.

If literature isn’t everything, it’s not worth a single hour of someone’s trouble.

A writer who takes political, social or literary positions must act only with the means that are his. These means are the written words.