Encyclopedia
The dollar has been the currency
Currency
In economics, currency refers to a generally accepted medium of exchange. These are usually the coins and banknotes of a particular government, which comprise the physical aspects of a nation's money supply...
of Namibia
Namibia
Namibia, officially the Republic of Namibia , is a country in southern Africa whose western border is the Atlantic Ocean. It shares land borders with Angola and Zambia to the north, Botswana to the east and South Africa to the south and east. It gained independence from South Africa on 21 March...
since 1993. It is normally abbreviated with the dollar sign
Dollar sign
The dollar or peso sign is a symbol primarily used to indicate the various peso and dollar units of currency around the world.- Origin :...
$, or alternatively N$ to distinguish it from other dollar
Dollar
The dollar is the name of the official currency of many countries, including Australia, Belize, Canada, Ecuador, El Salvador, Hong Kong, New Zealand, Singapore, Taiwan, and the United States.-Etymology:...
-denominated currencies. It is divided into 100 cent
Cent (currency)
In many national currencies, the cent is a monetary unit that equals 1⁄100 of the basic monetary unit. Etymologically, the word cent derives from the Latin word "centum" meaning hundred. Cent also refers to a coin which is worth one cent....
s.

The dollar replaced the South African rand
South African rand
The rand is the currency of South Africa. It takes its name from the Witwatersrand , the ridge upon which Johannesburg is built and where most of South Africa's gold deposits were found. The rand has the symbol "R" and is subdivided into 100 cents, symbol "c"...
, which had been the country's currency while it was under South Africa
South Africa
The Republic of South Africa is a country in southern Africa. Located at the southern tip of Africa, it is divided into nine provinces, with of coastline on the Atlantic and Indian oceans...
n rule as South-West Africa 1920-1990. The rand is still legal tender
Legal tender
Legal tender is a medium of payment allowed by law or recognized by a legal system to be valid for meeting a financial obligation. Paper currency is a common form of legal tender in many countries....
, as the Namibian dollar is linked to the South African rand and can be exchanged on a one-to-one basis locally. Namibia was also part of the Common Monetary Area
Common Monetary Area
The Common Monetary Area links South Africa, Lesotho and Swaziland into a monetary union. It is allied to the Southern African Customs Union . Namibia automatically became a member upon independence, but withdrew with the introduction of the Namibian dollar in 1993...
from independence in 1990 until introduction of the dollar in 1993.

In 1990, moves were under way to replace the rand with a new Namibia
Namibia
Namibia, officially the Republic of Namibia , is a country in southern Africa whose western border is the Atlantic Ocean. It shares land borders with Angola and Zambia to the north, Botswana to the east and South Africa to the south and east. It gained independence from South Africa on 21 March...
n currency. The name kalahar was proposed, as the Kalahari Desert
Kalahari Desert
The Kalahari Desert is a large semi-arid sandy savannah in Southern Africa extending , covering much of Botswana and parts of Namibia and South Africa, as semi-desert, with huge tracts of excellent grazing after good rains. The Kalahari supports more animals and plants than a true desert...
is located in eastern Namibia. The name of Namibia's central bank was going to be known as the Namibia Reserve Bank
Namibia Reserve Bank
The Namibia Reserve Bank was the proposed name of Namibia's central bank upon Namibia's independence within the Commonwealth of Nations in March 1990. Moves were under way during 1990 to replace the South African rand with a proposed currency called the kalahar...
. Denominations of this planned currency included 2, 5, 10, and 20 kalahar. (Note: There were two different designs for the 20 kalahar specimen notes.) However, these plans came to nothing, but some specimen notes were printed in a range of denominations.


Coin
Coin
A coin is a piece of hard material that is standardized in weight, is produced in large quantities in order to facilitate trade, and primarily can be used as a legal tender token for commerce in the designated country, region, or territory....
s in circulation
Years of mintage are 1993, 1996, 1998, 2000, 2002, 2008 and 2009. The cent coins are made of nickel
Nickel
Nickel is a chemical element with the chemical symbol Ni and atomic number 28. It is a silvery-white lustrous metal with a slight golden tinge. Nickel belongs to the transition metals and is hard and ductile...
plated steel
Steel
Steel is an alloy that consists mostly of iron and has a carbon content between 0.2% and 2.1% by weight, depending on the grade. Carbon is the most common alloying material for iron, but various other alloying elements are used, such as manganese, chromium, vanadium, and tungsten...
and the dollar coins of brass
Brass
Brass is an alloy of copper and zinc; the proportions of zinc and copper can be varied to create a range of brasses with varying properties.In comparison, bronze is principally an alloy of copper and tin...

Banknote
Banknote
A banknote is a kind of negotiable instrument, a promissory note made by a bank payable to the bearer on demand, used as money, and in many jurisdictions is legal tender. In addition to coins, banknotes make up the cash or bearer forms of all modern fiat money...
s in circulation

Hendrik Witbooi
Hendrik Witbooi (Namaqua chief)
Hendrik Witbooi was a king of the Namaqua people, a sub-tribe of the Khoikhoi. He lived in present day Namibia. His face is portrayed on the obverse of all Namibian dollar banknotes.-Names:...
, once a Namaqua chief and instrumental in leading the revolts against German rule at the turn of the 20th century, is depicted on all banknotes. 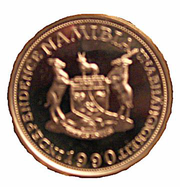 During the planning phase of the introduction of a new national currency replacing the South African rand, the newly founded Bank of Namibia
Bank of Namibia
The Bank of Namibia was established in 1993 to replace the never opened Namibia Reserve Bank. The Bank of Namibia is the only institution that is permitted to issue the Namibian dollar by authority that has been given to it under an Act of the Namibian Parliament. The head of the Bank of Namibia is...
minted a proof series of coins denominated in dollar
Dollar
The dollar is the name of the official currency of many countries, including Australia, Belize, Canada, Ecuador, El Salvador, Hong Kong, New Zealand, Singapore, Taiwan, and the United States.-Etymology:...
s as well as in mark
Mark (money)
Mark was a measure of weight mainly for gold and silver, commonly used throughout western Europe and often equivalent to 8 ounces. Considerable variations, however, occurred throughout the Middle Ages Mark (from a merging of three Teutonic/Germanic languages words, Latinized in 9th century...
s, for the consideration of the Namibian Ministry of Finance
Finance minister
The finance minister is a cabinet position in a government.A minister of finance has many different jobs in a government. He or she helps form the government budget, stimulate the economy, and control finances...
. The decision then fell in favour of the name ‘dollar’ for the new currency.

The proof series consisted of four different coin
Coin
A coin is a piece of hard material that is standardized in weight, is produced in large quantities in order to facilitate trade, and primarily can be used as a legal tender token for commerce in the designated country, region, or territory....
s: 1 mark, 1 dollar (both in copper
Copper
Copper is a chemical element with the symbol Cu and atomic number 29. It is a ductile metal with very high thermal and electrical conductivity. Pure copper is soft and malleable; an exposed surface has a reddish-orange tarnish...
/nickel
Nickel
Nickel is a chemical element with the chemical symbol Ni and atomic number 28. It is a silvery-white lustrous metal with a slight golden tinge. Nickel belongs to the transition metals and is hard and ductile...
), 10 marks and 10 dollars (both in silver
Silver
Silver is a metallic chemical element with the chemical symbol Ag and atomic number 47. A soft, white, lustrous transition metal, it has the highest electrical conductivity of any element and the highest thermal conductivity of any metal...
). The recto of the mark pieces shows a sitting lion
Lion
The lion is one of the four big cats in the genus Panthera, and a member of the family Felidae. With some males exceeding 250 kg in weight, it is the second-largest living cat after the tiger...
where the dollar pieces depict a Bushman
Bushmen
The indigenous people of Southern Africa, whose territory spans most areas of South Africa, Zimbabwe, Lesotho, Mozambique, Swaziland, Botswana, Namibia, and Angola, are variously referred to as Bushmen, San, Sho, Barwa, Kung, or Khwe...
with bow
Bow (weapon)
The bow and arrow is a projectile weapon system that predates recorded history and is common to most cultures.-Description:A bow is a flexible arc that shoots aerodynamic projectiles by means of elastic energy. Essentially, the bow is a form of spring powered by a string or cord...
and arrow
Arrow
An arrow is a shafted projectile that is shot with a bow. It predates recorded history and is common to most cultures.An arrow usually consists of a shaft with an arrowhead attached to the front end, with fletchings and a nock at the other.- History:...
. All recto sides bear the indication of denomination as well as the remark ‘PROBE’/‘ESSAI’ (proof). The verso of the 1-mark/1-dollar pieces shows Namibia’s former coat of arms
Coat of arms of Namibia
The coat of arms of Namibia is the official heraldic symbol of Namibia. Introduced at the time of independence in 1990, it superseded the earlier coat of arms used by the South African administration of the territory.-History:...
surrounded by the inscription ‘NAMIBIA’, the year (1990) and two ears of corn. The ten-mark/ten-dollar pieces bear the inscription ‘INDEPENDENCE’/‘UNABHÄNGIGKEIT’ (G.
German language
German is a West Germanic language, related to and classified alongside English and Dutch. With an estimated 90 – 98 million native speakers, German is one of the world's major languages and is the most widely-spoken first language in the European Union....
‘independence’) instead of the ears.

There was a series of Namibian pattern coins denominated in Rand dated 1990. These pattern coins are listed in the 2005 edition of Krause's 'Unusual World Coins'.

In adopting the Namibia dollar, Namibia followed the pattern of South Africa, Australia, and New Zealand in that when it adopted the decimal system, it decided to use the half pound unit as opposed to the pound unit of account. The choice of the name dollar was motivated by the fact that the reduced value of the new unit corresponded more closely to the value of the US dollar than it did to the pound sterling.
The source of this article is wikipedia, the free encyclopedia.  The text of this article is licensed under the GFDL.