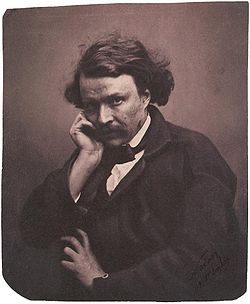 Félix Nadar was the pseudonym
Pseudonym
A pseudonym is a name that a person assumes for a particular purpose and that differs from his or her original orthonym...
of Gaspard-Félix Tournachon (1 April 1820, Paris
Paris
Paris is the capital and largest city in France, situated on the river Seine, in northern France, at the heart of the Île-de-France region...
– 23 March 1910), a French photographer, caricaturist, journalist
Journalist
A journalist collects and distributes news and other information. A journalist's work is referred to as journalism.A reporter is a type of journalist who researchs, writes, and reports on information to be presented in mass media, including print media , electronic media , and digital media A...
, novelist and balloonist
Balloon (aircraft)
A balloon is a type of aircraft that remains aloft due to its buoyancy. A balloon travels by moving with the wind. It is distinct from an airship, which is a buoyant aircraft that can be propelled through the air in a controlled manner....
. Some photographs by Nadar are marked "P. Nadar" for "Photographie Nadar" (see image below).

born in April 1820 in Paris
Paris
Paris is the capital and largest city in France, situated on the river Seine, in northern France, at the heart of the Île-de-France region...
(though some sources state Lyon
Lyon
Lyon , is a city in east-central France in the Rhône-Alpes region, situated between Paris and Marseille. Lyon is located at from Paris, from Marseille, from Geneva, from Turin, and from Barcelona. The residents of the city are called Lyonnais....
). He was a caricaturist for Le Charivari
Le Charivari
Le Charivari was an illustrated newspaper published in Paris, France from 1832 to 1937. It published caricatures, political cartoons and reviews...
in 1848. In 1849 he created the Revue comique and the Petit journal pour rire. He took his first photographs in 1853 and in 1858 became the first person to take aerial photographs. He also pioneered the use of artificial lighting in photography, working in the catacombs of Paris.

Around 1863, Nadar built a huge (6000 m³) balloon named Le Géant ("The Giant"), thereby inspiring Jules Verne
Jules Verne
Jules Gabriel Verne was a French author who pioneered the science fiction genre. He is best known for his novels Twenty Thousand Leagues Under the Sea , A Journey to the Center of the Earth , and Around the World in Eighty Days...
's Five Weeks in a Balloon
Five Weeks in a Balloon
Five Weeks in a Balloon, or, Journeys and Discoveries in Africa by Three Englishmen is an adventure novel by Jules Verne.It is the first Verne novel in which he perfected the "ingredients" of his later work, skillfully mixing a plot full of adventure and twists that hold the reader's interest with...
. Although the "Géant" project was initially unsuccessful Nadar was still convinced that the future belonged to heavier-than-air machines. Later, "The Society for the Encouragement of Aerial Locomotion by Means of Heavier than Air Machines" was established, with Nadar as president and Verne as secretary. Nadar was also the inspiration for the character of Michael Ardan
Michel Ardan
Michel Ardan is a fictional French adventurer created by Jules Verne. He plans to travel aboard the projectile in the series From the Earth to the Moon. Ardan is also a recurring character of Les Cités Obscures. The character was inspired by Félix Nadar.-Quotes:-See also:* From the Earth to the...
in Verne's From the Earth to the Moon
From the Earth to the Moon
From the Earth to the Moon is a humorous science fantasy novel by Jules Verne and is one of the earliest entries in that genre. It tells the story of the president of a post-American Civil War gun club in Baltimore, his rival, a Philadelphia maker of armor, and a Frenchman, who build an enormous...
.

On his visit to Brussels
Brussels
Brussels , officially the Brussels Region or Brussels-Capital Region , is the capital of Belgium and the de facto capital of the European Union...
with the Géant, on 26 September 1864, Nadar erected mobile barriers to keep the crowd at a safe distance. Up to this day, crowd control barrier
Crowd control barrier
Crowd control barriers , are commonly used at many public events. They are frequently visible at sporting events, parades, political rallies, demonstrations, and outdoor festivals...
s are known in Belgium as Nadar barriers.

In April 1874, he lent his photo studio to a group of painters, thus making the first exhibition of the Impressionists
Impressionism
Impressionism was a 19th-century art movement that originated with a group of Paris-based artists whose independent exhibitions brought them to prominence during the 1870s and 1880s...
possible. He photographed Victor Hugo
Victor Hugo
Victor-Marie Hugo was a Frenchpoet, playwright, novelist, essayist, visual artist, statesman, human rights activist and exponent of the Romantic movement in France....
on his death-bed in 1885. He is credited with having published (in 1886) the first photo-interview (of famous chemist Michel Eugène Chevreul
Michel Eugène Chevreul
Michel Eugène Chevreul was a French chemist whose work with fatty acids led to early applications in the fields of art and science. He is credited with the discovery of margaric acid and designing an early form of soap made from animal fats and salt...
, then a centenarian), and also took erotic photographs.

From 1895 until his return to Paris in 1909, the Nadar photo studio was in Marseilles (France).