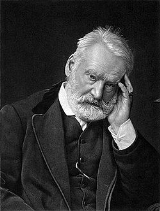 Overview
Victor-Marie Hugo (26 February 1802 – 22 May 1885) was a French
French people
The French are a nation that share a common French culture and speak the French language as a mother tongue. Historically, the French population are descended from peoples of Celtic, Latin and Germanic origin, and are today a mixture of several ethnic groups...

poet, playwright, novelist, essayist, visual artist, statesman
Statesman
A statesman is usually a politician or other notable public figure who has had a long and respected career in politics or government at the national and international level. As a term of respect, it is usually left to supporters or commentators to use the term...
, human rights
Human rights
Human rights are "commonly understood as inalienable fundamental rights to which a person is inherently entitled simply because she or he is a human being." Human rights are thus conceived as universal and egalitarian . These rights may exist as natural rights or as legal rights, in both national...
activist and exponent of the Romantic movement
Romanticism
Romanticism was an artistic, literary and intellectual movement that originated in the second half of the 18th century in Europe, and gained strength in reaction to the Industrial Revolution...
in France.

Hello; Recently I purchased a copy of Volume II of Victor Hugo's "The Man Who Laughs" and this volume is entitled "By Order of The King". I need...
More

Written the age of 15 in one of his notebooks (c. 1817), as quoted in The Literary Movement in France During the Nineteenth Century (1897) by Georges Pellissier
More
x