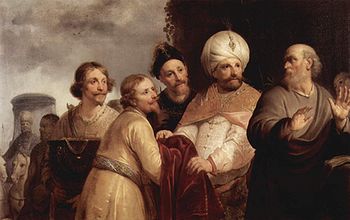 
Naaman (נַעֲמָן "pleasantness") was a commander of the armies of Ben-Hadad II in the time of Joram
Jehoram of Israel
Jehoram was a king of the northern Kingdom of Israel. He was the son of Ahab and Jezebel.According to , in the fifth year of Joram of Israel, Jehoram became king of Judah, when his father Jehoshaphat was king of Judah, indicating a co-regency...
, king of Israel. He is mentioned in of the Tanakh
Tanakh
The Tanakh is a name used in Judaism for the canon of the Hebrew Bible. The Tanakh is also known as the Masoretic Text or the Miqra. The name is an acronym formed from the initial Hebrew letters of the Masoretic Text's three traditional subdivisions: The Torah , Nevi'im and Ketuvim —hence...
. According to the narrative, he was afflicted with tzaraath
Tzaraath
The Hebrew noun tzaraath describes a disfigurative condition mainly referred to in chapters 13-14 of Leviticus, as well as conditions equivalent to be "mildew" on clothes and houses.Tzaraath affects both animate...
. When the Hebrew slave-girl who waits on his wife tells her of a prophet in Samaria
Samaria
Samaria, or the Shomron is a term used for a mountainous region roughly corresponding to the northern part of the West Bank.- Etymology :...
who can cure her master, he obtains a letter from Benhadad to Joram in which the former asks Joram to arrange for the healing of his subject Naaman. Naaman proceeds with the letter to Joram. The king of Israel suspects in this — to him — impossible request a pretext of Syria for later starting a war against him, and tears his clothes. When the prophet Elisha
Elisha
Elisha is a prophet mentioned in the Hebrew Bible and the Qur'an. His name is commonly transliterated into English as Elisha via Hebrew, Eliseus via Greek and Latin, or Alyasa via Arabic.-Biblical biography:...
hears about this, he sends for Naaman. But rather than personally receiving Naaman when the latter arrives at Elisha's house, Elisha merely sends a messenger to the door who tells Naaman to cure his Leprosy by dipping himself seven times in the Jordan River. Naaman, who had expected the prophet himself to come out to him and perform some kind of impressive ritual magic, angrily refuses, and prepares to go home unhealed. Only after Naaman's slaves suggest to their master that he has nothing to lose by at least giving it a try, he does as told and finds himself healed. Naaman returns to Elisha with lavish gifts, which Elisha flatly refuses to accept. Naaman also renounces his former god Rimmon
Rimmon
Rimmon is the proper name for a number of people or objects in the Hebrew Bible:# A man of Beeroth , one of the four Gibeonite cities. # A Syrian cult image, mentioned only in 2 Kings 5:18...
after being cured by Elisha and accepts the God of Israel.

Naaman is also mentioned in of the New Testament
New Testament
The New Testament is the second major division of the Christian biblical canon, the first such division being the much longer Old Testament....
as an example for the will of God to save people who are considered by men as less than pious and unworthy of salvation. As the Septuagint, the Greek Old Testament, uses the word baptizein for the dipping that heals the heathen Naaman, which also takes place in the Jordan River where Jesus Christ himself was baptized many centuries later, Christians have often interpreted the Naaman story as prefiguring the Christian baptism
Baptism
In Christianity, baptism is for the majority the rite of admission , almost invariably with the use of water, into the Christian Church generally and also membership of a particular church tradition...
of the heathen nations.
The source of this article is wikipedia, the free encyclopedia.  The text of this article is licensed under the GFDL.