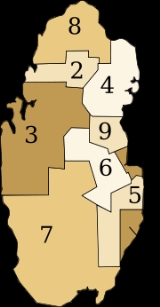 Before 2004, Qatar
Qatar
Qatar , also known as the State of Qatar or locally Dawlat Qaṭar, is a sovereign Arab state, located in the Middle East, occupying the small Qatar Peninsula on the northeasterly coast of the much larger Arabian Peninsula. Its sole land border is with Saudi Arabia to the south, with the rest of its...
was divided into 10 municipalities
Municipality
A municipality is essentially an urban administrative division having corporate status and usually powers of self-government. It can also be used to mean the governing body of a municipality. A municipality is a general-purpose administrative subdivision, as opposed to a special-purpose district...
(baladiyah
Baladiyah
Baladiyah is a type of Arabic administrative division that can be translated as municipality or district. The plural is baladiyat . Grammatically, it is the feminine of بلدي "rural, country-, folk-"....
):


Since 2004, Qatar has been divided into eight municipalities. A new municipality, Al Daayen
Al Daayen
Al Daayen is a municipality in the state of Qatar. Al Daayen will host world cup 2022 games.-History:Al-Daayen Municipality is the seventh in the Ministry of Municipality and Urban Planning, after the municipalities of Doha, Al-Rayyan, Al-Wakrah, Umm Salal, Al-Khor and Dhekra, and Al-Shamal...
, was created under Resolution No. 13, formed from parts of Umm Salal and Al Khawr; at the same time, Al Ghuwariyah was merged with Al Khawr; Al Jumaliyah was merged with Ar Rayyan; and Jarayan al Batnah was split between Ar Rayyan and Al Wakrah.

For statistical purposes, the municipalities are further subdivided into zones (87 in number as of 2004), which are in turn subdivided into blocks http://www.planning.gov.qa/Qatar-Census-2004/pubulation-eng/Tabels/Pubulation/T02.htm.

Please note that the population is from 2004 census.