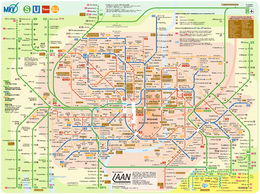 The Münchner Verkehrs- und Tarifverbund (German
German language
German is a West Germanic language, related to and classified alongside English and Dutch. With an estimated 90 – 98 million native speakers, German is one of the world's major languages and is the most widely-spoken first language in the European Union....
for Munich Transport and Tariff Association) or MVV is the transit authority of the city of Munich
Munich
Munich The city's motto is "" . Before 2006, it was "Weltstadt mit Herz" . Its native name, , is derived from the Old High German Munichen, meaning "by the monks' place". The city's name derives from the monks of the Benedictine order who founded the city; hence the monk depicted on the city's coat...
, the capital of the German
Germany
Germany , officially the Federal Republic of Germany , is a federal parliamentary republic in Europe. The country consists of 16 states while the capital and largest city is Berlin. Germany covers an area of 357,021 km2 and has a largely temperate seasonal climate...
state of Bavaria
Bavaria
Bavaria, formally the Free State of Bavaria is a state of Germany, located in the southeast of Germany. With an area of , it is the largest state by area, forming almost 20% of the total land area of Germany...
. Its jurisdiction covers the city and its surrounding area, responsible for the Munich S-Bahn
Munich S-Bahn
The Munich S-Bahn is an electric rail transit system in Munich, Germany. "S-Bahn" is the German abbreviation for stadtschnellbahn , and the Munich S-Bahn exhibits characteristics of both rapid transit and commuter rail systems.The Munich S-Bahn network is operated by S-Bahn München, a subsidiary...
commuter trains, the Munich U-Bahn
Munich U-Bahn
The Munich U-Bahn system is an electric rail rapid transit network in Munich, Germany. "U-Bahn" is the German contraction for Untergrundbahn or "subway." It is operated by the municipally owned Münchner Verkehrsgesellschaft...
, the Munich tramway
Munich Tramway
The Munich tramway is the tramway network for the city of Munich in Germany. Today it is operated by the municipally owned Münchner Verkehrsgesellschaft and is known officially and colloquially as the Tram...
and buses.


Transport services are provided by over 50 companies. These include Deutsche Bahn
Deutsche Bahn
Deutsche Bahn AG is the German national railway company, a private joint stock company . Headquartered in Berlin, it came into existence in 1994 as the successor to the former state railways of Germany, the Deutsche Bundesbahn of West Germany and the Deutsche Reichsbahn of East Germany...
, operators of the S-Bahn, and the Münchner Verkehrsgesellschaft, operators of the U-Bahn, tramway and city buses, together with a large number of operators of regional trains and buses.
The source of this article is wikipedia, the free encyclopedia.  The text of this article is licensed under the GFDL.