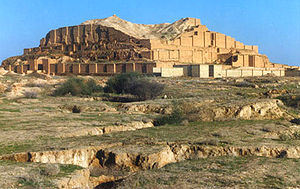 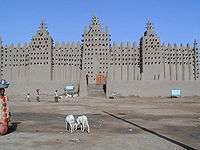 A mudbrick is a firefree brick
Brick
A brick is a block of ceramic material used in masonry construction, usually laid using various kinds of mortar. It has been regarded as one of the longest lasting and strongest building materials used throughout history.-History:...
, made of a mixture of clay
Clay
Clay is a general term including many combinations of one or more clay minerals with traces of metal oxides and organic matter. Geologic clay deposits are mostly composed of phyllosilicate minerals containing variable amounts of water trapped in the mineral structure.- Formation :Clay minerals...
, mud, sand, and water mixed with a binding material such as rice husks or straw. They use a stiff mixture and let them dry in the sun for 25 days.

In warm regions with very little timber available to fuel a kiln
Kiln
A kiln is a thermally insulated chamber, or oven, in which a controlled temperature regime is produced. Uses include the hardening, burning or drying of materials...
, bricks were generally sun dried. This had the result that their useful lifespan is reduced to around thirty years. Once a building collapsed, new bricks would have to be made and the new structure rebuilt on top of the rubble of the decayed old brick. This phenomenon is the primary factor behind the mounds or tell
Tell
A tell or tel, is a type of archaeological mound created by human occupation and abandonment of a geographical site over many centuries. A classic tell looks like a low, truncated cone with a flat top and sloping sides.-Archaeology:A tell is a hill created by different civilizations living and...
s on which many ancient cities stand. In some cases they extended the life of mud bricks by putting kiln dried bricks on top or covering them with stucco
Stucco
Stucco or render is a material made of an aggregate, a binder, and water. Stucco is applied wet and hardens to a very dense solid. It is used as decorative coating for walls and ceilings and as a sculptural and artistic material in architecture...
.

Adobe
Adobe
Adobe is a natural building material made from sand, clay, water, and some kind of fibrous or organic material , which the builders shape into bricks using frames and dry in the sun. Adobe buildings are similar to cob and mudbrick buildings. Adobe structures are extremely durable, and account for...
is a type of mudbrick also used today to save energy and is an environmentally safe way to insulate a house. This type of house tends to stay cool in the summer and warm in the winter.

The Great Mosque of Djenné
Great Mosque of Djenné
The Great Mosque of Djenné is the largest mud brick or adobe building in the world and is considered by many architects to be the greatest achievement of the Sudano-Sahelian architectural style, with definite Islamic influences. The mosque is located in the city of Djenné, Mali on the flood plain...
, in central Mali
Mali
Mali , officially the Republic of Mali , is a landlocked country in Western Africa. Mali borders Algeria on the north, Niger on the east, Burkina Faso and the Côte d'Ivoire on the south, Guinea on the south-west, and Senegal and Mauritania on the west. Its size is just over 1,240,000 km² with...
, is the world's largest mudbrick structure. It, like much Sahelian architecture, is built with a mudbrick called Banco: a recipe of mud and grain husks, fermented, and either formed into bricks or applied on surfaces as a plaster like paste in broad strokes. This plaster must be reapplied annually.

The South Asia
South Asia
South Asia, also known as Southern Asia, is the southern region of the Asian continent, which comprises the sub-Himalayan countries and, for some authorities , also includes the adjoining countries to the west and the east...
n inhabitants of Mehrgarh
Mehrgarh
Mehrgarh , one of the most important Neolithic sites in archaeology, lies on the "Kachi plain" of Balochistan, Pakistan...
constructed, and lived in, mud brick houses between 7000–3300 BCE. Mudbricks were in use in the Near East
Near East
The Near East is a geographical term that covers different countries for geographers, archeologists, and historians, on the one hand, and for political scientists, economists, and journalists, on the other...
during the aceramic Neolithic B period. The Sumer
Sumer
Sumer was a civilization and historical region in southern Mesopotamia, modern Iraq during the Chalcolithic and Early Bronze Age....
ians used sun-dried bricks in their city construction; typically these bricks were flat on the plano-convex mudbricks. Some bricks were formed in a square mould and rounded so that the middle was thicker than the ends.

In Minoan
Minoan civilization
The Minoan civilization was a Bronze Age civilization that arose on the island of Crete and flourished from approximately the 27th century BC to the 15th century BC. It was rediscovered at the beginning of the 20th century through the work of the British archaeologist Arthur Evans...
Crete
Crete
Crete is the largest and most populous of the Greek islands, the fifth largest island in the Mediterranean Sea, and one of the thirteen administrative regions of Greece. It forms a significant part of the economy and cultural heritage of Greece while retaining its own local cultural traits...
at the Knossos
Knossos
Knossos , also known as Labyrinth, or Knossos Palace, is the largest Bronze Age archaeological site on Crete and probably the ceremonial and political centre of the Minoan civilization and culture. The palace appears as a maze of workrooms, living spaces, and store rooms close to a central square...
site there is archaeological evidence that sun-dried bricks were used in the Neolithic
Neolithic
The Neolithic Age, Era, or Period, or New Stone Age, was a period in the development of human technology, beginning about 9500 BC in some parts of the Middle East, and later in other parts of the world. It is traditionally considered as the last part of the Stone Age...
period (e.g. prior to 3400 BC).

Mudbricks were used to some extent in pre-Roman
Ancient Rome
Ancient Rome was a thriving civilization that grew on the Italian Peninsula as early as the 8th century BC. Located along the Mediterranean Sea and centered on the city of Rome, it expanded to one of the largest empires in the ancient world....
Egypt
Ancient Egypt
Ancient Egypt was an ancient civilization of Northeastern Africa, concentrated along the lower reaches of the Nile River in what is now the modern country of Egypt. Egyptian civilization coalesced around 3150 BC with the political unification of Upper and Lower Egypt under the first pharaoh...
, and mudbrick use increased at the time of Roman influence.