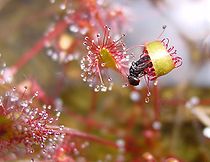 Mucilage is a thick, gluey substance produced by most plants and some microorganisms. It is a polar
Chemical polarity
In chemistry, polarity refers to a separation of electric charge leading to a molecule or its chemical groups having an electric dipole or multipole moment. Polar molecules interact through dipole–dipole intermolecular forces and hydrogen bonds. Molecular polarity is dependent on the difference in...
glycoprotein
Glycoprotein
Glycoproteins are proteins that contain oligosaccharide chains covalently attached to polypeptide side-chains. The carbohydrate is attached to the protein in a cotranslational or posttranslational modification. This process is known as glycosylation. In proteins that have segments extending...
and an exopolysaccharide
Exopolysaccharide
Exopolysaccharides are high-molecular-weight polymers that are composed of sugar residues and are secreted by a microorganism into the surrounding environment. Microorganisms synthesize a wide spectrum of multifunctional polysaccharides including intracellular polysaccharides, structural...
.

It occurs in various parts of nearly all classes of plant, usually in relatively small percentages, and is frequently associated with other substances, such as tannins and alkaloids.

Mucilage in plants is thought to aid in water storage and seed germination, and to act as a membrane thickener and food reserve. Among the richest sources are cacti (and other succulents) and flax
Flax
Flax is a member of the genus Linum in the family Linaceae. It is native to the region extending from the eastern Mediterranean to India and was probably first domesticated in the Fertile Crescent...
seeds.

Mucilage has a unique purpose in some carnivorous plants. The plant genera
Genus
In biology, a genus is a low-level taxonomic rank used in the biological classification of living and fossil organisms, which is an example of definition by genus and differentia...
Drosera (Sundews), Pinguicula
Pinguicula
The butterworts are a group of carnivorous plants comprising the genus Pinguicula. Members of this genus use sticky, glandular leaves to lure, trap, and digest insects in order to supplement the poor mineral nutrition they obtain from the environments. Of the roughly 80 currently known species, 12...
, and others have leaves studded with mucilage-secreting glands, and use a "flypaper trap" to capture insects.

Exopolysaccharides are the most stabilising factor for microaggregates and are widely distributed in soil
Soil
Soil is a natural body consisting of layers of mineral constituents of variable thicknesses, which differ from the parent materials in their morphological, physical, chemical, and mineralogical characteristics...
s. Therefore exopolysaccharide-producing "soil algae" play a vital role in the ecology
Ecology
Ecology is the scientific study of the relations that living organisms have with respect to each other and their natural environment. Variables of interest to ecologists include the composition, distribution, amount , number, and changing states of organisms within and among ecosystems...
of the world's soils. The substance covers the outside of, for example, unicellular or filamentous
Filamentation
Filamentation is the anomalous growth of certain bacteria, such as E. coli, in which cells continue to elongate but do not divide . Bacterial filamentation is often observed as a result of bacteria responding to various stresses, including DNA damage or inhibition of replication...
green algae
Green algae
The green algae are the large group of algae from which the embryophytes emerged. As such, they form a paraphyletic group, although the group including both green algae and embryophytes is monophyletic...
and cyanobacteria. Amongst the green algae especially, the group Volvocales
Volvocales
In taxonomy, the Volvocales, also known as Chlamydomonadales, are an order of flagellate or pseudociliate green algae, specifically of the Chlorophyceae...
are known to produce exopolysaccharides in a certain part of their life cycle
Biological life cycle
A life cycle is a period involving all different generations of a species succeeding each other through means of reproduction, whether through asexual reproduction or sexual reproduction...
.

Mucilage is edible, but tastes rather bland. It is used in medicine
Medicine
Medicine is the science and art of healing. It encompasses a variety of health care practices evolved to maintain and restore health by the prevention and treatment of illness....
for its demulcent
Demulcent
A demulcent is an agent that forms a soothing film over a mucous membrane, relieving minor pain and inflammation of the membrane. Demulcents are sometimes referred to as mucoprotective agents. Demulcents such as pectin, glycerin, honey, and syrup are common ingredients in cough mixtures...
properties. Traditionally marshmallows were made from the extract of the mucilaginous root of the marshmallow plant (Althaea officinalis)
Althaea officinalis
Althaea officinalis is a species indigenous to Africa, which is used as a medicinal plant and ornamental plant...
; due to the demulcent nature of the extract, it served as a cough suppressant. The inner bark
Bark
Bark is the outermost layers of stems and roots of woody plants. Plants with bark include trees, woody vines and shrubs. Bark refers to all the tissues outside of the vascular cambium and is a nontechnical term. It overlays the wood and consists of the inner bark and the outer bark. The inner...
of the slippery elm (Ulmus rubra)
Ulmus rubra
Ulmus rubra, the Slippery Elm, is a species of elm native to eastern North America...
, a North American tree species, has long been used as a demulcent, and is still produced commercially for that purpose.

Mucilage mixed with water is used as a glue
Glue
This is a list of various types of glue. Historically, the term "glue" only referred to protein colloids prepared from animal flesh. The meaning has been extended to refer to any fluid adhesive....
, especially for bonding paper items such as labels, postage stamps, and envelope flaps. Differing types and varying strengths of mucilage can also be used for other adhesive applications, including gluing labels to metal cans, wood to china, and leather to pasteboard.

During the fermentation of natto
Natto
is a traditional Japanese food made from soybeans fermented with Bacillus subtilis. It is popular especially as a breakfast food. As a rich source of protein and probiotics, nattō and the soybean paste miso formed a vital source of nutrition in feudal Japan. Nattō can be an acquired taste because...
soybean
Soybean
The soybean or soya bean is a species of legume native to East Asia, widely grown for its edible bean which has numerous uses...
s, extracellular enzymes produced by the bacterium Bacillus natto react with soybean sugars to produce mucilage. The amount and viscosity of the mucilage are important natto characteristics, contributing to natto’s unique taste and smell.

The mucilage of two kinds of insectivorous plants, sundew (Drosera) and butterwort (Pinguicula)
Pinguicula
The butterworts are a group of carnivorous plants comprising the genus Pinguicula. Members of this genus use sticky, glandular leaves to lure, trap, and digest insects in order to supplement the poor mineral nutrition they obtain from the environments. Of the roughly 80 currently known species, 12...
, is used for the traditional production of a yoghurt
Yoghurt
Yoghurt, yogurt or yogourt is a dairy product produced by bacterial fermentation of milk. The bacteria used to make yoghurt are known as "yoghurt cultures"...
-like Swedish
Sweden
Sweden , officially the Kingdom of Sweden , is a Nordic country on the Scandinavian Peninsula in Northern Europe. Sweden borders with Norway and Finland and is connected to Denmark by a bridge-tunnel across the Öresund....
dairy product called filmjölk
Filmjölk
Filmjölk is a Nordic dairy product, similar to yoghurt, but using different bacteria which give a different taste and texture....
.

Starch
Starch
Starch or amylum is a carbohydrate consisting of a large number of glucose units joined together by glycosidic bonds. This polysaccharide is produced by all green plants as an energy store...
mucilage, Flax seeds mucilage, Roots of Althaea officinalis
Althaea officinalis
Althaea officinalis is a species indigenous to Africa, which is used as a medicinal plant and ornamental plant...
.
Mucilage can be used in: gastrointestinal inflammatory processes; associated to topical irritation agents.
The mechanism of action is that mucilages cover the mucous membranes and prevent irritation of the nerve endings. Mucilages does not exert resorptive action.

The following plants are known to contain far greater concentrations of mucilage than is typically found in most plants: