Founded by John Mowlem
John Mowlem
John Mowlem was an English stonemason, builder and founder of the quarrying and construction company "Mowlem, Burt and Freeman".-Career:Mowlem was born in Swanage, Dorset, the son of a quarryman...
in 1822, the company was awarded a Royal Warrant
Royal Warrant
Royal warrants of appointment have been issued for centuries to those who supply goods or services to a royal court or certain royal personages. The warrant enables the supplier to advertise the fact that they supply to the royal family, so lending prestige to the supplier...
in 1902 and went public on the London Stock Exchange
London Stock Exchange
The London Stock Exchange is a stock exchange located in the City of London within the United Kingdom. , the Exchange had a market capitalisation of US$3.7495 trillion, making it the fourth-largest stock exchange in the world by this measurement...
in 1924. It acquired SGB Group in 1986.

The company undertook some of the UK's most sensitive reconstruction works including Buckingham Palace
Buckingham Palace
Buckingham Palace, in London, is the principal residence and office of the British monarch. Located in the City of Westminster, the palace is a setting for state occasions and royal hospitality...
in 1943 following bomb damage, the House of Commons
British House of Commons
The House of Commons is the lower house of the Parliament of the United Kingdom, which also comprises the Sovereign and the House of Lords . Both Commons and Lords meet in the Palace of Westminster. The Commons is a democratically elected body, consisting of 650 members , who are known as Members...
in 1947 also following bomb damage, 10 Downing Street
10 Downing Street
10 Downing Street, colloquially known in the United Kingdom as "Number 10", is the headquarters of Her Majesty's Government and the official residence and office of the First Lord of the Treasury, who is now always the Prime Minister....
in 1963 and a new nave and altar for Westminster Abbey
Westminster Abbey
The Collegiate Church of St Peter at Westminster, popularly known as Westminster Abbey, is a large, mainly Gothic church, in the City of Westminster, London, United Kingdom, located just to the west of the Palace of Westminster. It is the traditional place of coronation and burial site for English,...
in 1966. 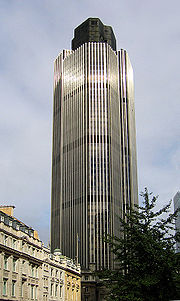 Major projects undertaken by or involving Mowlem in the 20th century included Admiralty Arch
Admiralty Arch
Admiralty Arch is a large office building in London which incorporates an archway providing road and pedestrian access between The Mall, which extends to the South-West, and Trafalgar Square to the North-East. It was designed by Sir Aston Webb, constructed by John Mowlem & Co and completed in 1912...
completed in 1912, the Port of London Authority Building
Port of London
The Port of London lies along the banks of the River Thames from London, England to the North Sea. Once the largest port in the world, it is currently the United Kingdom's second largest port, after Grimsby & Immingham...
completed in 1919, Bush House
Bush House
Bush House is a building between Aldwych and The Strand in London at the southern end of Kingsway. The BBC World Service occupies the Centre Block, North East and South East wings. The North West wing was formerly occupied by BBC Online until they relocated to BBC Media Village in 2005, with some...
completed in 1923, the London Post Office Railway
London Post Office Railway
The Post Office Railway, also known as Mail Rail, was a narrow-gauge driverless private underground railway in London built by the Post Office with assistance from the Underground Electric Railways Company of London to move mail between sorting offices...
completed in 1927, the William Girling Reservoir
William Girling Reservoir
The William Girling Reservoir is located in the London Borough of Enfield and is part of the Lee Valley Reservoir Chain that supplies London with drinking water. It is named after William Girling OBE, a chairman of the Metropolitan Water Board . The reservoir and the nearby King George V Reservoir...
completed in 1951, Millbank Tower
Millbank Tower
Millbank Tower is a high skyscraper in the City of Westminster at Millbank, on the banks of the River Thames in London, in the United Kingdom. The Tower was constructed in 1963 for Vickers and was originally known as Vickers Tower. It was designed by Ronald Ward and Partners and built by John...
completed in 1963, London Bridge
London Bridge
London Bridge is a bridge over the River Thames, connecting the City of London and Southwark, in central London. Situated between Cannon Street Railway Bridge and Tower Bridge, it forms the western end of the Pool of London...
completed in 1972, the Natwest Tower
Tower 42
Tower 42 is the second tallest skyscraper in the City of London and the fifth tallest in London overall. The original name was the National Westminster Tower, having been built to house the National Westminster Bank's International Division. Seen from above, the tower closely resembles the NatWest...
completed in 1979, Thames House
Thames House
Thames House is an office development in Millbank, London, on the north bank of the River Thames adjacent to Lambeth Bridge, designed originally as commercial head offices...
completed in 1994 and the Spinnaker Tower
Spinnaker Tower
Spinnaker Tower is a –high landmark tower in Portsmouth, England. It is the centrepiece of the redevelopment of Portsmouth Harbour, which was supported by a National Lottery grant. Its shape was chosen by Portsmouth residents from a selection of concepts...
completed in 2005.

By 2005 the company had expanded such that it employed more than 25,000 people and had an annual turnover of nearly £2 billion.

Mowlem took over many companies over the years. In the south west region they traded under the E. Thomas Construction name, who had been locally based.