Encyclopedia
Mount Gilead is a village in Morrow County
Morrow County, Ohio
Morrow County is a county located in the state of Ohio, United States. Shawnee people used the area for hunting purposes before white settlers arrived in the early 19th century. Morrow County was organized in 1848 from parts of four neighboring counties and named for Jeremiah Morrow, Governor of...
, Ohio
Ohio
Ohio is a Midwestern state in the United States. The 34th largest state by area in the U.S.,it is the 7th‑most populous with over 11.5 million residents, containing several major American cities and seven metropolitan areas with populations of 500,000 or more.The state's capital is Columbus...
, United States
United States
The United States of America is a federal constitutional republic comprising fifty states and a federal district...
.

Mount Gilead's population was 3,290 at the 2000 census
United States Census, 2000
The Twenty-second United States Census, known as Census 2000 and conducted by the Census Bureau, determined the resident population of the United States on April 1, 2000, to be 281,421,906, an increase of 13.2% over the 248,709,873 persons enumerated during the 1990 Census...
. It is the county seat
County seat
A county seat is an administrative center, or seat of government, for a county or civil parish. The term is primarily used in the United States....
of Morrow County and the center of population
Center of population
In demographics, the center of population of a region is a geographical point that describes a centerpoint of the region's population...
of Ohio.http://www.census.gov/geo/www/cenpop/statecenters.txt The village was established in 1832, eight years after white settler
Settler
A settler is a person who has migrated to an area and established permanent residence there, often to colonize the area. Settlers are generally people who take up residence on land and cultivate it, as opposed to nomads...
s arrived in the region. Before their arrival, the forest was a hunting area for the Shawnee
Shawnee
The Shawnee, Shaawanwaki, Shaawanooki and Shaawanowi lenaweeki, are an Algonquian-speaking people native to North America. Historically they inhabited the areas of Ohio, Virginia, West Virginia, Western Maryland, Kentucky, Indiana, and Pennsylvania...
tribe.

Located in the center of the village is Morrow County's historic World War I
World War I
World War I , which was predominantly called the World War or the Great War from its occurrence until 1939, and the First World War or World War I thereafter, was a major war centred in Europe that began on 28 July 1914 and lasted until 11 November 1918...
Victory Memorial Shaft, unique in the United States, and Mount Gilead State Park
Mt. Gilead State Park
Mount Gilead State Park is located in Morrow County, Ohio, United States to the east of the village of Mount Gilead. Access to the park is via State Route 95....
is nearby on State Route 95. Other areas drawing tourism
Tourism
Tourism is travel for recreational, leisure or business purposes. The World Tourism Organization defines tourists as people "traveling to and staying in places outside their usual environment for not more than one consecutive year for leisure, business and other purposes".Tourism has become a...
include the Amish
Amish
The Amish , sometimes referred to as Amish Mennonites, are a group of Christian church fellowships that form a subgroup of the Mennonite churches...
farms, shops and stores east of Mount Gilead, near Chesterville
Chesterville, Ohio
Chesterville is a village in Morrow County, Ohio, United States, along the Kokosing River. The population was 193 at the 2000 census. Chesterville is southeast of Mount Gilead, the county seat.-Geography:Chesterville is located at...
and Johnsville. Mount Gilead is also home to the Morrow County Hospital.

Four properties in Mount Gilead are listed on the National Register of Historic Places
National Register of Historic Places
The National Register of Historic Places is the United States government's official list of districts, sites, buildings, structures, and objects deemed worthy of preservation...
: the floral hall at the county fairgrounds, Levering Hall
Levering Hall
Levering Hall is a historic building in downtown Mount Gilead, Ohio, United States. A fine example of the Italianate style, it was intended to house a range of civic functions....
, the Morrow County Courthouse, and the James S. Trimble House
James S. Trimble House
The James S. Trimble House is a historic residence in the village of Mount Gilead, Ohio, United States. The most significant house in the village, it was built in the middle of the nineteenth century, and it has been designated a historic site....
. Levering Hall in particular is distinguished by its ornate Italianate architecture
Italianate architecture
The Italianate style of architecture was a distinct 19th-century phase in the history of Classical architecture. In the Italianate style, the models and architectural vocabulary of 16th-century Italian Renaissance architecture, which had served as inspiration for both Palladianism and...
and its place as the center of community life for several decades.

Mount Gilead is considered to be a part of "Central Ohio."

As of the census
Census
A census is the procedure of systematically acquiring and recording information about the members of a given population. It is a regularly occurring and official count of a particular population. The term is used mostly in connection with national population and housing censuses; other common...
of 2000, there were 3,290 people, 1,291 households, and 843 families residing in the village. The population density
Population density
Population density is a measurement of population per unit area or unit volume. It is frequently applied to living organisms, and particularly to humans...
was 1,035.7 people per square mile (399.5/km²). There were 1,354 housing units at an average density of 426.3 per square mile (164.4/km²). The racial makeup of the village was 97.78% White, 0.12% Native American, 0.24% Asian, 0.30% from other races
Race (United States Census)
Race and ethnicity in the United States Census, as defined by the Federal Office of Management and Budget and the United States Census Bureau, are self-identification data items in which residents choose the race or races with which they most closely identify, and indicate whether or not they are...
, 1.06% African American, and 0.49% from two or more races. Hispanic or Latino of any race were 1.03% of the population.

There were 1,291 households out of which 31.6% had children under the age of 18 living with them, 50.8% were married couples
Marriage
Marriage is a social union or legal contract between people that creates kinship. It is an institution in which interpersonal relationships, usually intimate and sexual, are acknowledged in a variety of ways, depending on the culture or subculture in which it is found...
living together, 10.6% had a female householder with no husband present, and 34.7% were non-families. 31.1% of all households were made up of individuals and 18.1% had someone living alone who was 65 years of age or older. The average household size was 2.35 and the average family size was 2.91.

The median income for a household in the village was $31,894, and the median income for a family was $42,529. Males had a median income of $35,714 versus $22,425 for females. The per capita income
Per capita income
Per capita income or income per person is a measure of mean income within an economic aggregate, such as a country or city. It is calculated by taking a measure of all sources of income in the aggregate and dividing it by the total population...
for the village was $19,064. About 10.1% of families and 13.2% of the population were below the poverty line, including 18.1% of those under age 18 and 16.4% of those age 65 or over. 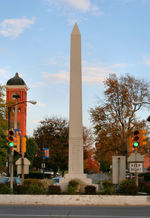 The Victory Shaft was erected in Mount Gilead's town square in December 1919, following World War I
World War I
World War I , which was predominantly called the World War or the Great War from its occurrence until 1939, and the First World War or World War I thereafter, was a major war centred in Europe that began on 28 July 1914 and lasted until 11 November 1918...
. It was presented as a gift from the federal government to Morrow County citizens to thank them for purchasing more war bond
War bond
War bonds are debt securities issued by a government for the purpose of financing military operations during times of war. War bonds generate capital for the government and make civilians feel involved in their national militaries...
s per capita than any other county. Warren G. Harding, a Senator
United States Senate
The United States Senate is the upper house of the bicameral legislature of the United States, and together with the United States House of Representatives comprises the United States Congress. The composition and powers of the Senate are established in Article One of the U.S. Constitution. Each...
at the time, was the keynote
Keynote
A keynote in literature, music, or public speaking establishes the principal underlying theme. In corporate or commercial settings, greater importance is attached to the delivery of a keynote speech or keynote address...
speaker at the dedication.