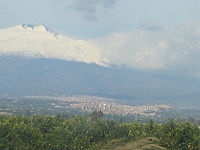 Motta Sant'Anastasia is a comune
Comune
In Italy, the comune is the basic administrative division, and may be properly approximated in casual speech by the English word township or municipality.-Importance and function:...
(municipality) in the Province of Catania
Province of Catania
Catania is a province in the autonomous island region of Sicily in Italy. Its capital is the city of Catania.It has an area of 3,552 km², and a total population of 1,073,881 . There are 58 comunes in the province, see Comunes of the Province of Catania...
in the Italian
Italy
Italy , officially the Italian Republic languages]] under the European Charter for Regional or Minority Languages. In each of these, Italy's official name is as follows:;;;;;;;;), is a unitary parliamentary republic in South-Central Europe. To the north it borders France, Switzerland, Austria and...
region Sicily
Sicily
Sicily is a region of Italy, and is the largest island in the Mediterranean Sea. Along with the surrounding minor islands, it constitutes an autonomous region of Italy, the Regione Autonoma Siciliana Sicily has a rich and unique culture, especially with regard to the arts, music, literature,...
, located about 160 km southeast of Palermo
Palermo
Palermo is a city in Southern Italy, the capital of both the autonomous region of Sicily and the Province of Palermo. The city is noted for its history, culture, architecture and gastronomy, playing an important role throughout much of its existence; it is over 2,700 years old...
and about 9 km west of Catania
Catania
Catania is an Italian city on the east coast of Sicily facing the Ionian Sea, between Messina and Syracuse. It is the capital of the homonymous province, and with 298,957 inhabitants it is the second-largest city in Sicily and the tenth in Italy.Catania is known to have a seismic history and...
. As of 31 December 2007, it had a population of 11,203 and an area of 35.7 km².

The municipality of Motta Sant'Anastasia contains the frazione
Frazione
A frazione , in Italy, is the name given in administrative law to a type of territorial subdivision of a comune; for other administrative divisions, see municipio, circoscrizione, quartiere...
(subdivision) Piano Tavola and also the Naval Air Station Sigonella. The latter accounts for the substantial numbers of American military personnel and their families who reside in Motta Sant'Anastasia.

Motta, like other cities in the Simeto Valley, has ancient origins. Archaeological studies dating back to 1954 in contrada Ardizzone, attest Greek
Greece
Greece , officially the Hellenic Republic , and historically Hellas or the Republic of Greece in English, is a country in southeastern Europe....
presence in the territory around the 5th–4th centuries BC. The Roman period, however, was evidenced by the discovery of some coins from the period of the great empire, and a mosaic
Mosaic
Mosaic is the art of creating images with an assemblage of small pieces of colored glass, stone, or other materials. It may be a technique of decorative art, an aspect of interior decoration, or of cultural and spiritual significance as in a cathedral...
found in contrada Acquarone , belonging to a villa
Villa
A villa was originally an ancient Roman upper-class country house. Since its origins in the Roman villa, the idea and function of a villa have evolved considerably. After the fall of the Roman Republic, villas became small farming compounds, which were increasingly fortified in Late Antiquity,...
.

On behalf of Motta Sant'Anastasia name there are several hypotheses. According to some scholars Motta (pre-Roman name) and Anastasia (Greek-Byzantine name) have similar meanings and indicate the nature of the place, the typical relief of the territory that has been characterized by the Neck and the surrounding area of Motta Sant'Anastasia. Later in the 12th–14th centuries, the two names were combined and citizens joined in devotion and worship of Sant'Anastasia, patroness of the town.

Motta, since the period of Dionysus
Dionysus
Dionysus was the god of the grape harvest, winemaking and wine, of ritual madness and ecstasy in Greek mythology. His name in Linear B tablets shows he was worshipped from c. 1500—1100 BC by Mycenean Greeks: other traces of Dionysian-type cult have been found in ancient Minoan Crete...
, tyrant
Tyrant
A tyrant was originally one who illegally seized and controlled a governmental power in a polis. Tyrants were a group of individuals who took over many Greek poleis during the uprising of the middle classes in the sixth and seventh centuries BC, ousting the aristocratic governments.Plato and...
of Syracuse, has held a role of considerable importance as a stronghold of warning and defence.

This role grew during the Norman period with Ruggero d'Altavilla, who had built a tower to guard the entrance of the plain of Catania
Catania
Catania is an Italian city on the east coast of Sicily facing the Ionian Sea, between Messina and Syracuse. It is the capital of the homonymous province, and with 298,957 inhabitants it is the second-largest city in Sicily and the tenth in Italy.Catania is known to have a seismic history and...
and protect the possessions of the Normans from Saracen incursions. The characteristics of the area, the remains of defensive structures and housing highlight the typical medieval town. "La Motta", in fact, consisted of an elevated place from where it was possible to control the entire territory. In England, around 1066, on "Motta" of places of conquest, the Normans built a wooden tower to defend the occupied territories. But in Sicily
Sicily
Sicily is a region of Italy, and is the largest island in the Mediterranean Sea. Along with the surrounding minor islands, it constitutes an autonomous region of Italy, the Regione Autonoma Siciliana Sicily has a rich and unique culture, especially with regard to the arts, music, literature,...
, for the lack of forests, the Normans had to build their towers with basalt
Basalt
Basalt is a common extrusive volcanic rock. It is usually grey to black and fine-grained due to rapid cooling of lava at the surface of a planet. It may be porphyritic containing larger crystals in a fine matrix, or vesicular, or frothy scoria. Unweathered basalt is black or grey...
stone. At "Motta" this construction was facilitated by the morphological conformation of the place, that it lends itself well to building the defensive outpost.

The first settlement outside the walls was the district Urnazza that, around 1500, was erected near the church of St. Anthony, then the place of burial for the neighborhoods "Urnazza" and "Matrix."
In 1526 the city became a fief of Antonio Moncada, Count of Adernò, and for four centuries, until 1900, the castle was intended to be a prison
Prison
A prison is a place in which people are physically confined and, usually, deprived of a range of personal freedoms. Imprisonment or incarceration is a legal penalty that may be imposed by the state for the commission of a crime...
.

In the second half of 1600 there were 560 inhabitants in Motta. Between the second half of 1700 and 1800 there was the beginning of the development of the structure of the town, with the birth of new neighborhoods, such as "Cross", "Well," "Sciddichenti". In 1798 the inhabitants of Motta became 1400 and in the census of 1831 arrived to 2181.
On 1 January 1820 the Court of Catania founded the town of Motta Sant'Anastasia.

The Neck is the rock upon which the oldest part of Motta Sant'Anastasia was built, and it is of volcanic origin. A long and intense eruption dating back to 550,000 years ago caused the formation of a volcanic cone.
Over the centuries, due to the processes of erosion, the cone has acquired its current shape named "columnar rocks", a prismatic hexagonal and pentagonal section more or less regular, reaching a height of 65 meters.

Motta is one of the only example of "Neck" in Italy. Other cases are found in France (Le Puy of Velay) in Algeria (Tamanrasset-Ahaggar) and USA (Missouri, Montana, Arizona, Utah, New Mexico). The vegetation on the rock is made up of lichens and Indian fig (Opuntia Ficus Indica Mill). 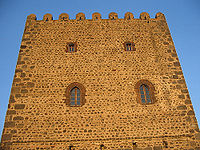 The Tower of Motta (or "Dongione") was built between 1070 and 1074 (it seems on the ruins of an Arabic tower) by the will of the great Count Roger the Norman. The massive tower with a rectangular plan (with dimensions: 21.54 x 9 x 17.10 m) is about 21 meters high and is a typical defensive structure of the late Middle Ages. The roof terrace retains almost intact battlements (22 merlons with rounded head).

The structure consists of three elevations. Only the first of these is still the original arched windows ogive (external) and at all sixth (inside). The other two square windows, on other levels, such as the current front door, go back to the 15th century.