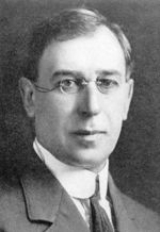 He was born in Elizabetgrad, Russian Empire
Russian Empire
The Russian Empire was a state that existed from 1721 until the Russian Revolution of 1917. It was the successor to the Tsardom of Russia and the predecessor of the Soviet Union...
. In 1884, the family emigrated to Chicago
Chicago
Chicago is the largest city in the US state of Illinois. With nearly 2.7 million residents, it is the most populous city in the Midwestern United States and the third most populous in the US, after New York City and Los Angeles...
to escape the pogrom
Pogrom
A pogrom is a form of violent riot, a mob attack directed against a minority group, and characterized by killings and destruction of their homes and properties, businesses, and religious centres...
s following the assassination of Czar Alexander II
Alexander II of Russia
Alexander II , also known as Alexander the Liberator was the Emperor of the Russian Empire from 3 March 1855 until his assassination in 1881...
. In Chicago he worked at the Stock Yards while attending Lake High School. In 1886, Moses entered the University of Michigan
University of Michigan
The University of Michigan is a public research university located in Ann Arbor, Michigan in the United States. It is the state's oldest university and the flagship campus of the University of Michigan...
, where he obtained his B.Sc in 1890 and his doctorate in 1894 under the supervision of A. B. Prescott. His thesis, titled "Trimethylxanthine and Some of its Derivatives," dealt with the derivatization of caffeine
Caffeine
Caffeine is a bitter, white crystalline xanthine alkaloid that acts as a stimulant drug. Caffeine is found in varying quantities in the seeds, leaves, and fruit of some plants, where it acts as a natural pesticide that paralyzes and kills certain insects feeding on the plants...
and was an extension of Prescott's work. Appointed an instructor in 1893, Gomberg worked at the University of Michigan for the duration of his professional academic career, becoming chair of the Department of Chemistry from 1927 until his retirement in 1936. Dr. Gomberg served as President of the American Chemical Society in 1931. He never married, living with his sister Sophia in Ann Arbor for his adult life. 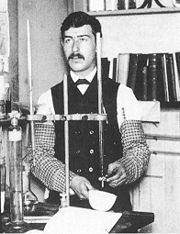 In 1896–1897 he took a year's leave to work as a postdoctoral researcher
Postdoctoral researcher
Postdoctoral research is scholarly research conducted by a person who has recently completed doctoral studies, normally within the previous five years. It is intended to further deepen expertise in a specialist subject, including acquiring novel skills and methods...
with Baeyer
Adolf von Baeyer
Johann Friedrich Wilhelm Adolf von Baeyer was a German chemist who synthesized indigo, and was the 1905 recipient of the Nobel Prize in Chemistry. Born in Berlin, he initially studied mathematics and physics at Berlin University before moving to Heidelberg to study chemistry with Robert Bunsen...
and Thiele
Johannes Thiele (chemist)
Friedrich Karl Johannes Thiele was a German chemist and a prominent professor at several universities, including those in Munich and Strasbourg. He developed many laboratory techniques related to isolation of organic compounds...
in Munich and with Victor Meyer in Heidelberg
Heidelberg
-Early history:Between 600,000 and 200,000 years ago, "Heidelberg Man" died at nearby Mauer. His jaw bone was discovered in 1907; with scientific dating, his remains were determined to be the earliest evidence of human life in Europe. In the 5th century BC, a Celtic fortress of refuge and place of...
, where he successfully prepared the long-elusive tetraphenylmethane
Tetraphenylmethane
Tetraphenylmethane is an organic compound consisting of a methane core with four phenyl substituents. It was first synthesized by Moses Gomberg in 1898....
.

During attempts to prepare the even more sterically congested
Steric effects
Steric effects arise from the fact that each atom within a molecule occupies a certain amount of space. If atoms are brought too close together, there is an associated cost in energy due to overlapping electron clouds , and this may affect the molecule's preferred shape and reactivity.-Steric...
hydrocarbon hexaphenylethane he correctly identified the triphenylmethyl radical
Triphenylmethyl radical
The triphenylmethyl radical is a persistent radical and the first-ever radical described in organic chemistry. It can be prepared by homolysis of triphenylmethyl chloride 1 by a metal like silver or zinc in benzene or diethyl ether. The radical 2 forms a chemical equilibrium with the quinoid type...
, the first persistent radical to be discovered, and is thus known as the founder of radical chemistry
Radical (chemistry)
Radicals are atoms, molecules, or ions with unpaired electrons on an open shell configuration. Free radicals may have positive, negative, or zero charge...
. The work was later followed up by Wilhelm Schlenk
Wilhelm Schlenk
Wilhelm Johann Schlenk was a German chemist. He was born in Munich and also studied chemistry there. Schlenk succeeded Hermann Emil Fischer at the University of Berlin in 1919....
. Gomberg was a mentor to Werner Emmanuel Bachmann
Werner Emmanuel Bachmann
Werner Emmanuel Bachmann was a U.S. chemist. Bachmann was born in Detroit, Michigan where he studied chemistry and chemical engineering at Wayne State University and later at the University of Michigan in Ann Arbor nearby...
who also carried on his work and together they discovered the Gomberg-Bachmann reaction
Gomberg-Bachmann reaction
The Gomberg–Bachmann reaction, named for the Ukrainian-American chemist Moses Gomberg and the American chemist Werner Emmanuel Bachmann, is an aryl-aryl coupling reaction via a diazonium salt....
. 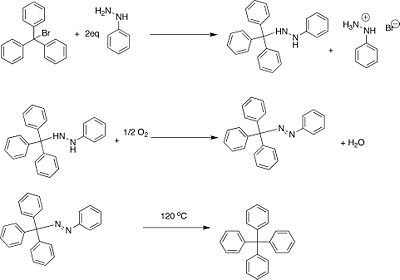 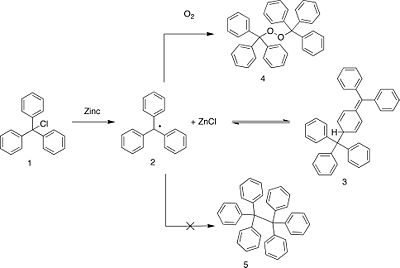 Seeking to prepare hexaphenylethane (5) Gomberg attempted a Wurtz coupling of triphenylchloromethane (1). Elemental analysis
Elemental analysis
Percent Composition is a process where a sample of some material is analyzed for its elemental and sometimes isotopic composition. Elemental analysis can be qualitative , and it can be quantitative...
of the resultant white crystalline solid however, uncovered discrepancies with the predicted molecular formula:
Hypothesizing that (1) had combined with molecular oxygen to form the peroxide (4), Gomberg found that treatment of (1) with sodium peroxide was another means of synthesizing (4).

By performing the reaction of triphenylchloromethane with zinc under an atmosphere of carbon dioxide Gomberg obtained the free radical (2). This compound reacted readily with air, chlorine, bromine and iodine. On the basis of his experimental evidence Gomberg concluded that he had discovered the first instance of a persistent radical and trivalent carbon. This was a controversial conclusion for many years as molecular weight determinations of (2) found a value that was double that of the free radical. Gomberg postulated that some non-tetravalent carbon structure existed in solution because of the observed activity towards oxygen and the halogens. Gomberg and Bachmann later found that treatment of "hexaphenylethane" with magnesium resulted in a Grignard reagent, the first instance of the formation of such a compound from a hydrocarbon. Studies of other triarylmethyl compounds gave results similar to Gomberg's, and it was hypothesized that (2) existed in equilibrium with its dimer hexaphenylethane (5). However this structure was later disproven in favor of the quinoid dimer (3).

At the end of his first report of trivalent carbon "On Trivalent Carbon"reference 5 Gomberg wrote "This work will be continued and I wish to reserve the field for myself." While nineteenth-century chemists respected such claims Gomberg found that the field of chemistry he founded was too rich to reserve for himself.

Upon his death in 1947 Moses Gomberg bequeathed his estate to the Chemistry Department of the University of Michigan for the creation of student fellowships. In 2000, the centennial of his paper "Triphenylmethyl, a Case of Trivalent Carbon", a symposium was held in his memory and a plaque was installed in the Chemistry Building at the University of Michigan designating a National Historic Chemical Landmark.

In 1993, the Chemistry Department of the University of Michigan instituted the Moses Gomberg Lecture series to provide assistant professors an opportunity to invite distinguished scientists to the Chemistry department.