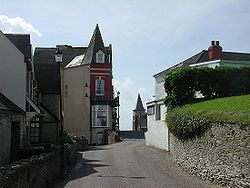 Mortehoe is a village on the north coast of Devon
Devon
Devon is a large county in southwestern England. The county is sometimes referred to as Devonshire, although the term is rarely used inside the county itself as the county has never been officially "shired", it often indicates a traditional or historical context.The county shares borders with...
near Woolacombe
Woolacombe
Woolacombe is a seaside resort on the coast of North Devon, England, which lies at the mouth of a valley . The beach, which has Blue Flag and Premier Seaside Beach awards for its cleanliness, water quality and facilities, is long, sandy, gently sloping and faces the Atlantic Ocean near the...
, sited on the hilly land behind Morte Point
Morte Point
Morte Point is a peninsula on the North West coast of Devon, England, belonging to the National Trust. To the east is the village of Mortehoe and to the south is the seaside resort of Woolacombe....
. A nearby village is Lee Bay
Lee Bay
Lee Bay is a small village on the North Devon coast near Woolacombe.The village of Lee lies at the foot of what is known locally as the Fuchsia Valley, and consists of around 100 properties, mostly old in style. The village centre is about a quarter of a mile from the sea, and is linked to the area...
.

Mortehoe can trace its origins back to the Domesday Book, and beyond. In former years it was the haunt of smugglers
Smuggling
Smuggling is the clandestine transportation of goods or persons, such as out of a building, into a prison, or across an international border, in violation of applicable laws or other regulations.There are various motivations to smuggle...
and wreckers
Wrecking (shipwreck)
Wrecking is the practice of taking valuables from a shipwreck which has foundered near or close to shore. Often an unregulated activity of opportunity in coastal communities, wrecking has been subjected to increasing regulation and evolved into what is now known as marine salvage...
, but was more recently a farming community. Since the coming of the railway (the Ilfracombe Branch Line
Ilfracombe Branch Line
The Ilfracombe Branch of the London & South Western Railway , ran between Barnstaple and Ilfracombe in North Devon. The branch opened as a single-track line in 1874, but was sufficiently popular that it needed to be upgraded to double-track in 1889....
), Mortehoe has become much more dependent on tourism, with numerous camp sites
Camping
Camping is an outdoor recreational activity. The participants leave urban areas, their home region, or civilization and enjoy nature while spending one or several nights outdoors, usually at a campsite. Camping may involve the use of a tent, caravan, motorhome, cabin, a primitive structure, or no...
in the vicinity.
Despite this, the remoteness of the village has ensured it has retained much of its country charm.

Mortehoe and the surrounding area is used for the location of the 2007 film The Mist
The Mist (film)
The Mist is a 2007 American science-fiction horror film based on the 1980 novella of the same name by Stephen King. The film is written and directed by Frank Darabont, who had previously adapted Stephen King's works The Shawshank Redemption and The Green Mile...
. 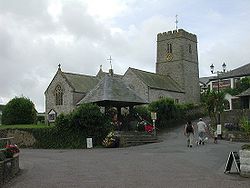 The oldest parts of the Anglican
Anglicanism
Anglicanism is a tradition within Christianity comprising churches with historical connections to the Church of England or similar beliefs, worship and church structures. The word Anglican originates in ecclesia anglicana, a medieval Latin phrase dating to at least 1246 that means the English...
church of St Mary date back to Norman
Normans
The Normans were the people who gave their name to Normandy, a region in northern France. They were descended from Norse Viking conquerors of the territory and the native population of Frankish and Gallo-Roman stock...
times, but it has been added to in subsequent years. The bell tower, carved pew
Pew
A pew is a long bench seat or enclosed box used for seating members of a congregation or choir in a church, or sometimes in a courtroom.-Overview:Churches were not commonly furnished with permanent pews before the Protestant Reformation...
s and the William de Tracey tomb are medieval. The chancel-arch mosaic
Mosaic
Mosaic is the art of creating images with an assemblage of small pieces of colored glass, stone, or other materials. It may be a technique of decorative art, an aspect of interior decoration, or of cultural and spiritual significance as in a cathedral...
and the 'archangel
Archangel
An archangel is an angel of high rank. Archangels are found in a number of religious traditions, including Judaism, Christianity and Islam. Michael and Gabriel are recognized as archangels in Judaism and by most Christians. Michael is the only archangel specifically named in the Protestant Bible...
' window were designed by Selwyn Image
Selwyn Image
Selwyn Image was a British clergyman, designer, including of stained glass windows and poet....
. The later parts of the building are of the 14th and 16th centuries. The carved benchends are 13th century, the wagon roof of the nave 15th century and the table-tomb of William de Tracey, Rector of Mortehoe is dated 1322.

Mortehoe may be reached by road from two directions: either a steep, narrow lane that follows the hilly coast north from Woolacombe
Woolacombe
Woolacombe is a seaside resort on the coast of North Devon, England, which lies at the mouth of a valley . The beach, which has Blue Flag and Premier Seaside Beach awards for its cleanliness, water quality and facilities, is long, sandy, gently sloping and faces the Atlantic Ocean near the...
; or else a twisty, narrow road from the east.

The popularity of this remote corner of Devon was boosted by the coming of the railway, in 1874. Unfortunately for visitors, Mortehoe station
Mortehoe and Woolacombe railway station
Mortehoe and Woolacombe railway station was a station on the London and South Western Railway Ilfracombe Branch Line between Barnstaple and Ilfracombe in North Devon, England .-History:...
was nearly two miles inland from the village, so Mortehoe was rather less affected by the additional population than its now much larger neighbour, Woolacombe. The Ilfracombe Branch Line
Ilfracombe Branch Line
The Ilfracombe Branch of the London & South Western Railway , ran between Barnstaple and Ilfracombe in North Devon. The branch opened as a single-track line in 1874, but was sufficiently popular that it needed to be upgraded to double-track in 1889....
railway closed in 1970, so this is no longer an option for tourists wishing to visit the area. 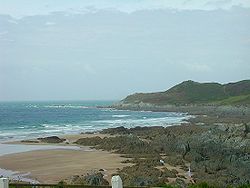 The Mortehoe Heritage Centre, based in the Cart Linhay building, also acts as the local tourist information office. On the upper floor is a museum of the history of the most north-westerly tip of North Devon
North Devon
North Devon is the northern part of the English county of Devon. It is also the name of a local government district in Devon. Its council is based in Barnstaple. Other towns and villages in the North Devon District include Braunton, Fremington, Ilfracombe, Instow, South Molton, Lynton and Lynmouth...
. The museum has displays about the local farming communities, the railway, and the numerous shipwreck
Shipwreck
A shipwreck is what remains of a ship that has wrecked, either sunk or beached. Whatever the cause, a sunken ship or a wrecked ship is a physical example of the event: this explains why the two concepts are often overlapping in English....
s that occurred off the treacherous rocks around the nearby coast. The rebuilding of the heritage site was managed by surveyor, and later landlord, Douglas Victor Watkins.

Bull Point Lighthouse
Bull Point Lighthouse
Bull Point Lighthouse is a lighthouse on Bull Point, about one mile north of the village of Mortehoe, on the northern coast of Devon, England. The original lighthouse was constructed in 1879 after a group of local "clergy, ship-owners, merchants and landowners" appealed to Trinity House for one...
is a short walk along the South West Coast Path
South West Coast Path
The South West Coast Path is Britain's longest waymarked long-distance footpath and a National Trail. It stretches for , running from Minehead in Somerset, along the coasts of Devon and Cornwall, to Poole Harbour in Dorset. Since it rises and falls with every river mouth, it is also one of the more...
from the centre of the village. Walks around Morte Point
Morte Point
Morte Point is a peninsula on the North West coast of Devon, England, belonging to the National Trust. To the east is the village of Mortehoe and to the south is the seaside resort of Woolacombe....
offer spectacular coastal scenery.