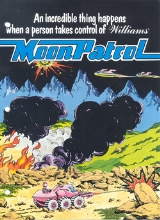 Encyclopedia
is a classic arcade game
Arcade game
An arcade game is a coin-operated entertainment machine, usually installed in public businesses such as restaurants, bars, and amusement arcades. Most arcade games are video games, pinball machines, electro-mechanical games, redemption games, and merchandisers...
by Irem that was first released in 1982. It was licensed to Williams for distribution in North America.

The player controls a moon buggy, viewing it from the side, that travels over the moon
Moon
The Moon is Earth's only known natural satellite,There are a number of near-Earth asteroids including 3753 Cruithne that are co-orbital with Earth: their orbits bring them close to Earth for periods of time but then alter in the long term . These are quasi-satellites and not true moons. For more...
's surface. While driving it, obstacles such as craters and mines must be avoided. The buggy is also attacked by UFO
Unidentified flying object
A term originally coined by the military, an unidentified flying object is an unusual apparent anomaly in the sky that is not readily identifiable to the observer as any known object...
s from above and tanks on the ground. Moon Patrol was one of the earliest linear side-scrolling shoot'em ups and one of the earliest arcade games to feature parallax scrolling
Parallax scrolling
Parallax scrolling is a special scrolling technique in computer graphics, popularized in the 1982 arcade game Moon Patrol. In this pseudo-3D technique, background images move by the camera slower than foreground images, creating an illusion of depth in a 2D video game and adding to the immersion...
.

The player takes the role of a Luna City police officer
Police officer
A police officer is a warranted employee of a police force...
assigned to Sector Nine, the home of the "toughest thugs in the galaxy."

The top portion of the screen shows a timeline-style map of the current course, and three indicator lights. The top light indicates upcoming enemy aerial attacks, the middle one indicates an upcoming minefield, and the bottom one indicates enemies approaching from behind.

The map shows five different checkpoints labeled E, J, O, T and Z. Similar to racing games, the time spent during between each checkpoint is compared to the average which determines the amount of bonus points allocated to the player. The game contains two courses, the regular and champion course; after completing the first course your buggy's color changes from pink to red and the game continues on.

There have been many ports of Moon Patrol to home computers and console game systems, including: