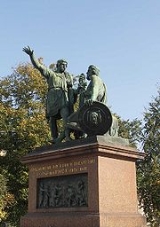 Encyclopedia
Monument to Minin and Pozharsky is a bronze statue on Red Square
Red Square
Red Square is a city square in Moscow, Russia. The square separates the Kremlin, the former royal citadel and currently the official residence of the President of Russia, from a historic merchant quarter known as Kitai-gorod...
of Moscow
Moscow
Moscow is the capital, the most populous city, and the most populous federal subject of Russia. The city is a major political, economic, cultural, scientific, religious, financial, educational, and transportation centre of Russia and the continent...
, Russia
Russia
Russia or , officially known as both Russia and the Russian Federation , is a country in northern Eurasia. It is a federal semi-presidential republic, comprising 83 federal subjects...
in front of Saint Basil's Cathedral
Saint Basil's Cathedral
The Cathedral of the Protection of Most Holy Theotokos on the Moat , popularly known as Saint Basil's Cathedral , is a Russian Orthodox church erected on the Red Square in Moscow in 1555–61. Built on the order of Ivan the Terrible to commemorate the capture of Kazan and Astrakhan, it marks the...
. The statue commemorates prince Dmitry Pozharsky
Dmitry Pozharsky
For the ship of the same name, see Sverdlov class cruiserDmitry Mikhaylovich Pozharsky was a Rurikid prince, who led Russia's struggle for independence against Polish-Lithuanian invasion known as the Time of Troubles...
and Kuzma Minin, who gathered the all-Russian volunteer army and expelled the forces of the Polish-Lithuanian Commonwealth
Polish-Lithuanian Commonwealth
The Polish–Lithuanian Commonwealth was a dualistic state of Poland and Lithuania ruled by a common monarch. It was the largest and one of the most populous countries of 16th- and 17th‑century Europe with some and a multi-ethnic population of 11 million at its peak in the early 17th century...
from Moscow, thus putting an end to the Time of Troubles
Time of Troubles
The Time of Troubles was a period of Russian history comprising the years of interregnum between the death of the last Russian Tsar of the Rurik Dynasty, Feodor Ivanovich, in 1598, and the establishment of the Romanov Dynasty in 1613. In 1601-1603, Russia suffered a famine that killed one-third...
in 1612.

The monument was conceived by the Free Society of Lovers of Literature, Science, and the Arts
Free Society of Lovers of Literature, Science, and the Arts
The Free Society of Lovers of Literature, Science, and the Arts was a Russian literary and political society active in the early 19th Century....
to commemorate the 200th anniversary of the events. The construction was funded by public conscription in Nizhny Novgorod
Nizhny Novgorod
Nizhny Novgorod , colloquially shortened to Nizhny, is, with the population of 1,250,615, the fifth largest city in Russia, ranking after Moscow, St. Petersburg, Novosibirsk, and Yekaterinburg...
, the city whence Minin and Pozharsky came to save Moscow. The Tsar Alexander I
Alexander I of Russia
Alexander I of Russia , served as Emperor of Russia from 23 March 1801 to 1 December 1825 and the first Russian King of Poland from 1815 to 1825. He was also the first Russian Grand Duke of Finland and Lithuania....
, however, opted for the monument to be located on Red Square
Red Square
Red Square is a city square in Moscow, Russia. The square separates the Kremlin, the former royal citadel and currently the official residence of the President of Russia, from a historic merchant quarter known as Kitai-gorod...
next to the Moscow Kremlin
Moscow Kremlin
The Moscow Kremlin , sometimes referred to as simply The Kremlin, is a historic fortified complex at the heart of Moscow, overlooking the Moskva River , Saint Basil's Cathedral and Red Square and the Alexander Garden...
rather than in Nizhny Novgorod.The competition of projects was won by the celebrated sculptor Ivan Martos
Ivan Martos
Ivan Petrovich Martos was a Russian sculptor and art teacher of Ukrainian origin who helped awaken Russian interest in Neoclassical sculpture....
in 1808. Martos completed a model, which was approved by Empress Maria Feodorovna and the Russian Academy of Fine Arts in 1813. Casting work using 1100 lbs of copper was completed in 1816 in St Petersburg. The base, made from three massive blocks of granite
Granite
Granite is a common and widely occurring type of intrusive, felsic, igneous rock. Granite usually has a medium- to coarse-grained texture. Occasionally some individual crystals are larger than the groundmass, in which case the texture is known as porphyritic. A granitic rock with a porphyritic...
from Finland
Finland
Finland , officially the Republic of Finland, is a Nordic country situated in the Fennoscandian region of Northern Europe. It is bordered by Sweden in the west, Norway in the north and Russia in the east, while Estonia lies to its south across the Gulf of Finland.Around 5.4 million people reside...
were also carved at St Petersburg. Moving the statue and base to Moscow presented logistical challenges, and was accomplished during winter by use of the frozen waterways. However, in the wake of Napoleon's invasion of Russia, the monument could not be unveiled until 1818.

The front of the base has a brone placque, depicting a scene of citizens-patriots sacrificing their property for the benefit of the motherland. On the left is an image of the sculptor Martos, giving away his two sons (one of whom died in 1813)

Originally, the statue stood in the centre of Red Square, with Pozharsky waving his hand towards the Moscow Kremlin. However, after the 1917 Revolution, the Communist authorities, for whom the monument was obstructing military parades, discussed plans for its demolition or moving it to some indoor museum. In 1936, the statue was moved closer to the cathedral where it remains up to the present.

On the first celebration of the Day of People's Unity
Public holidays in Russia
The following is the list of official public holidays recognized by the Government of Russia. On these days, government offices, embassies and some shops, are closed. If the date of observance falls on a Saturday or Sunday, the following Monday will be a day off in lieu of the holiday.-New Year...
(November 4, 2005) a near exact copy of this monument by Zurab Tsereteli
Zurab Tsereteli
Zurab Konstantines dze Tsereteli is a Georgian-Russian painter, sculptor and architect who holds the office of President of the Russian Academy of Arts.- Life :...
was erected in Nizhny Novgorod
Nizhny Novgorod
Nizhny Novgorod , colloquially shortened to Nizhny, is, with the population of 1,250,615, the fifth largest city in Russia, ranking after Moscow, St. Petersburg, Novosibirsk, and Yekaterinburg...
. The copy is only 5 cm shorter than the Moscow original.
The source of this article is wikipedia, the free encyclopedia.  The text of this article is licensed under the GFDL.