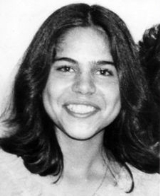 In 1969 the government of Yemen expelled all foreigners and the Mahmudnizhad family returned to Iran. They spent two years in Isfahan, six months in Kirmanshah and three years in Tabriz
Tabriz
Tabriz is the fourth largest city and one of the historical capitals of Iran and the capital of East Azerbaijan Province. Situated at an altitude of 1,350 meters at the junction of the Quri River and Aji River, it was the second largest city in Iran until the late 1960s, one of its former...
before finally settling in Shiraz in 1974. During this time her father repaired small appliances for work and served the Bahá'í community as part of various Bahá'í administrative
Bahá'í administration
The Bahá'í administration or Bahá'í administrative order refers to the administrative system of the Bahá'í Faith.It is split into two parts, the elected and the appointed...
bodies.

While Bahá'ís regularly faced persecution
Persecution of Bahá'ís
The persecution of Bahá'ís is the religious persecution of Bahá'ís in various countries, especially in Iran, where the Bahá'í Faith originated and the location of one of the largest Bahá'í populations in the world...
in Iran, the Islamic Revolution
Iranian Revolution
The Iranian Revolution refers to events involving the overthrow of Iran's monarchy under Shah Mohammad Reza Pahlavi and its replacement with an Islamic republic under Ayatollah Ruhollah Khomeini, the leader of the...
of 1979 refocused the persecution. At 7:30pm on October 23, 1982, four armed revolutionary guards, sent by the public prosecutor of Shiraz, entered the Mahmudnizhad household and ransacked the home in search of Bahá'í material. When they were finished they took Mona and her father into custody. The two were blindfolded and taken to Seppah prison in Shiraz, where they were placed in separate quarters; Mahmudnizhad was detained in Seppah prison for a total of 38 days.

The names and ages of the other women who were hanged with Mahmudnizhad were:

Roy Mottahedeh, a Princeton University
Princeton University
Princeton University is a private research university located in Princeton, New Jersey, United States. The school is one of the eight universities of the Ivy League, and is one of the nine Colonial Colleges founded before the American Revolution....
professor, wrote that the executions went against Iran, the concept of a Republic
Republic
A republic is a form of government in which the people, or some significant portion of them, have supreme control over the government and where offices of state are elected or chosen by elected people. In modern times, a common simplified definition of a republic is a government where the head of...
and Islam
Islam
Islam . The most common are and .   : Arabic pronunciation varies regionally. The first vowel ranges from ~~. The second vowel ranges from ~~~...
. Specifically he cited Qur'an:


If it had been your Lord's will, they would have all believed, all those who are on earth. Will you then compel mankind, against their will, to believe? Qur'an
Qur'an
The Quran , also transliterated Qur'an, Koran, Alcoran, Qur’ān, Coran, Kuran, and al-Qur’ān, is the central religious text of Islam, which Muslims consider the verbatim word of God . It is regarded widely as the finest piece of literature in the Arabic language...
10:99

Pop culture
Mahmudnizhad's story is the subject of several art works; music artist Doug Cameron
Doug Cameron (musician)
Douglas John Cameron is a Canadian musician and composer best known for writing and performing a protest song entitled "Mona with the Children" about a Persian Bahá'í woman, Mona Mahmudnizhad, who, in 1983, together with nine other Bahá'í women, was sentenced to death and hanged in Shiraz, Iran,...
recreated Mahmudnizhad's story in a music video, Mona with the Children, which made the pop charts in Canada
Canada
Canada is a North American country consisting of ten provinces and three territories. Located in the northern part of the continent, it extends from the Atlantic Ocean in the east to the Pacific Ocean in the west, and northward into the Arctic Ocean...
(#14 for the week of October 19, 1985). The video was distributed throughout the music scene and was effective in bringing the human rights situation of the Bahá'ís in Iran
Persecution of Bahá'ís
The persecution of Bahá'ís is the religious persecution of Bahá'ís in various countries, especially in Iran, where the Bahá'í Faith originated and the location of one of the largest Bahá'í populations in the world...
to the attention of the public. More recently a play, A Dress for Mona has been produced and currently Jack Lenz
Jack Lenz
Jack Lenz is a Canadian Bahá'í composer. He has written, performed, and produced music for film, television, and theatre, along with working on non-soundtrack album ventures. He is also the founder of Live Unity Enterprises, an organization devoted to the production of music for the Bahá'í...
is working on a movie called Mona's Dream. Her pictures are also featured in Mithaq Kazimi
Mithaq Kazimi
Mithaq Kazimi is a film director and producer, mostly known for his documentary film 16 Days in Afghanistan and founding member of Dawn Breakers International Film Festival...
's Quenching The Light
Quenching The Light
Quenching The Light is a PSA that highlights the persecutions of Baha'is in Iran. It is produced by Mithaq Kazimi and features the paintings of Bahá'í martyrs by Mahmehr Golstaneh mixed with live video footage of the decedents of the martyrs...
video.